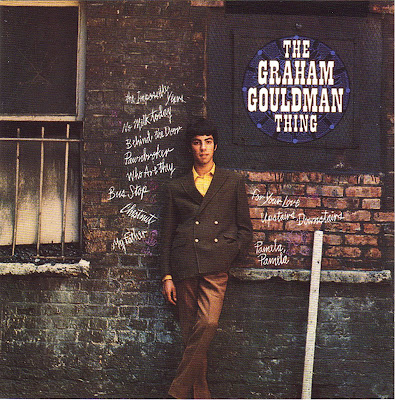 Already established among the most successful songwriters Britain had ever produced, Graham Gouldman launched his solo career in 1966 after two successive band projects, the Whirlwinds and the Mockingbirds, met nothing but failure.
The Mockingbirds were formed by Graham Gouldman in late 1964, following the breakup of the earlier Whirlwinds. The lineup included two fellow members of that band, bassist Bernard Basso and guitarist Steve Jacobsen, plus drummer Kevin Godley from another recently disbanded Manchester group, the Sabres. The stage was set for perhaps Britain’s greatest should have but didn’t band of the mid-’60s. Throughout that period, after all, Gouldman was writing some of the most successful and individual hits of the entire decade — but not one of them brought the Mockingbirds success.

Their bad luck commenced immediately. Signing to Columbia, the Mockingbirds announced their debut single would be “For Your Love,” a song Gouldman wrote in the changing room of the men’s clothing shop where he worked. Columbia, however, had other ideas; they rejected it in favor of another Gouldman original, taped on the same day, “That’s How It’s Gonna Stay.” It bombed, even as the rejected song resurfaced on the same label, courtesy of the Yardbirds, after Gouldman hand-delivered it to the band in their dressing room at a London gig.
A second Mockingbirds single, “I Can Feel We’re Parting,” went nowhere, even as the Yardbirds soared high with further Gouldman compositions “Heartful of Soul” and “Evil Hearted You.” The Hollies scored with his “Look Through Any Window,” but a Mockingbirds single for Andrew Loog Oldham’s Immediate label, “You Stole My Love,” sank without trace. 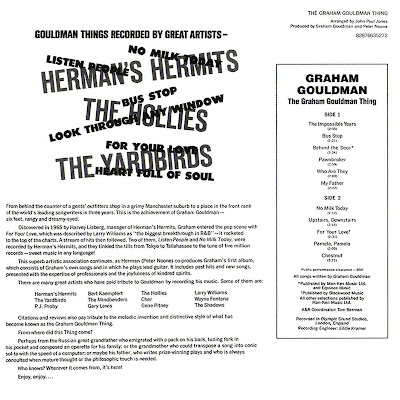 Gouldman's own solo career debuted in February 1966 with "Stop or I'll Be Gone"; he was also working with Friday Browne, a Manchester singer who was to be involved in several Gouldman projects, as well as having a later single, "Ask Any Woman," produced by him. In November 1966, she joined Gouldman, former Country Gentleman Peter Cowap, Phil Dermys, Clem Cattini, and future Led Zeppelin bassist John Paul Jones in the High Society, an ad hoc combination whose sole single, "People Pass By," remains a forgotten classic.
This same team then became the Manchester Mob and recorded March 1967's "Bony Maroni at the Hop" before Gouldman, Jones, Eddie Kramer, and Peter Noone began work on what became the songwriter's first solo album, The Graham Gouldman Thing. Largely comprising Gouldman's own versions of the songs he had written for others, the album (which would be released in America only) was prefaced with a new single, "No Milk Today" (a U.K. hit for Herman's Hermits). It flopped. A British 45, "Upstairs Downstairs," followed unsuccessful suit, and by the time the album itself was issued, Gouldman had abandoned his solo plans to join the Mindbenders for their final single, "Uncle Joe the Ice Cream Man," and tour. The group then broke up and Gouldman and Mindbenders guitarist Eric Stewart immediately set to work building Strawberry Studios in the Manchester suburb of Stockport.
Gouldman also returned to his maverick wanderings, cutting a bizarre instrumental version of Noel Harrison's "The Windmills of Your Mind" as the Graham Gouldman Orchestra and issuing a minor psych masterpiece under the pseudonym Garden Odyssey. He also recorded some material for the short-lived Marmalade label, including one song, "The Late Mr. Late," which appeared on a label sampler together with a reunion with ex-Mockingbirds drummer Kevin Godley, "To Fly Away." (Godley's own project, Frabjoy & the Runcible Spoon, was also signed to Marmalade.)
That label collapsed in early 1969, at which point Gouldman relocated to New York to become a contract songwriter at Kasenatz/Katz's songwriting factory -- many of his compositions were then recorded at Strawberry, while Godley and Crème also got in on the action, composing (and recording) Crazy Elephant's hit "There Ain't No Umbopo." Gouldman, meanwhile, penned two Ohio Express hits, "Sausalito" and "Tampa Florida," together with Freddie and the Dreamers' French hit "Susan's Tuba" and "Fighter Squadron"'s "When He Comes."
Over the next two years, Strawberry proved remarkably productive. Albums by Ramases and Neil Sedaka, singles by comedian John Paul Joans (no relation to the bassist), sundry English soccer teams and comedy acts, and even a freak hit for the studio musicians themselves, Hotlegs "Neanderthal Man." Gouldman, however, would cut just one more solo single during this period, teaming with producer Eric Woolfson (later a member of the Alan Parsons Project) to record "Growing Older."
10cc consumed Gouldman's attention for the next seven years. He returned to solo action in 1979 during a layoff enforced while Eric Stewart recovered from injuries sustained in a serious motor accident. Sunburn, the soundtrack to a new Farrah Fawcett movie, became Gouldman's first ever solo hit single, reaching number 45 in Britain. The following year, Gouldman recorded a second soundtrack, Animalympics, to accompany an amusing sporting cartoon film. He also produced the Ramones' Pleasant Dreams album, before 10cc relaunched; following the group's final demise in 1982, Gouldman then launched a new band project, the Wax union with Andrew Gold.
A pair of 10cc reunions followed during the early '90s, while Gouldman also launched a songwriting partnership with Kirsty MacColl, tragically curtailed, of course, by her death in 2000. He returned to action that same year with And Another Thing, his second full solo album and, like the Graham Gouldman Thing, an opportunity to both try out some new songs and revisit some old -- "You Stole My Love," "Heartful of Soul," and 10cc's "Ready to Go Home" were among the highlights. 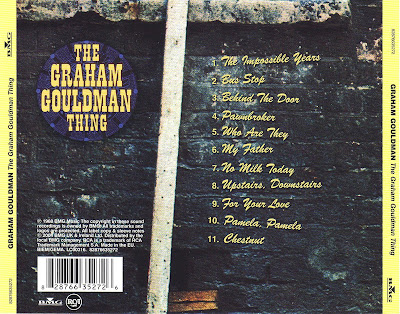 Gouldman issued this solo album in 1968, featuring his own versions of the hits "For Your Love," "Bus Stop," and "No Milk Today" with eight other original tunes. The album blends pensive, acoustic-guitar driven compositions with light orchestral arrangements. It's a pleasant record, but ultimately does not measure up to the monster hit covers of his tunes. He's only an adequate singer, and the slower, more elaborately produced versions of "Bus Stop" and "For Your Love" are not nearly as good as the hard-charging renditions by the Yardbirds and Hollies. A decent curio, though, highlighted by "Pawnbroker" and "Upstairs Downstairs," which would have fit in well on the Hollies' 1966-1967 records.
****
Posted by: D&J на 13:51