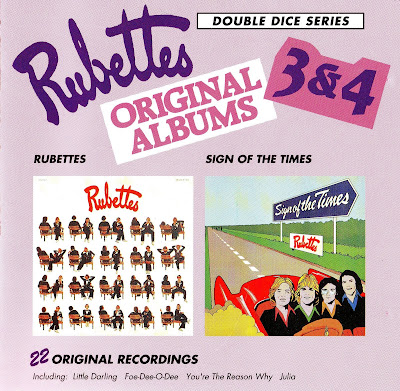 Rubettes(1975) & Sign Of The Times (1976)
Sign Of The Times (1976)
In terms of performance, arrangement, and production, the Rubettes' fourth album is as flawless as ever, another immaculate few steps down the Beatles/Beach Boys/10cc-esque road that past releases had mapped out for them and another light-year leap away from the retro-pop novelties that spawned the group in the first place. But that's all it is — a sea of slick studio workmanship and perfection that eased any goodness out of the actual songs long before they were pressed into plastic. And maybe that's where the album's title came from — such soul-less lifelessness certainly was a sign of the times, especially among those bands that had emerged from the now-deathlike glam scene. And, in the Rubettes' case, that was especially sad. Gone were the wide-screen choruses and broadly painted emotions of before, to be replaced (or, perhaps, consumed) by a need to be seen to be doing something "worthwhile," something "serious," something "mature." In other words, something so dull you might as well switch on Steely Dan. There are still a few bright sparks — "You're the Reason Why," the album's first single (and a modest number 28 hit that summer), was at least passingly pretty, while "Dancing in the Rain" and "I Think I'm in Love" both show a flicker of life. But such flourishes are few and far between, and while the rest of the album simply founders in a sea of cloying expertise, the closing "Highwayman's Lament" simply drowns in its own futility, a remake of the last two albums' own dramatic finales without anything new whatsoever to add. And that, too, was a sign of the times.
Dave Thompson 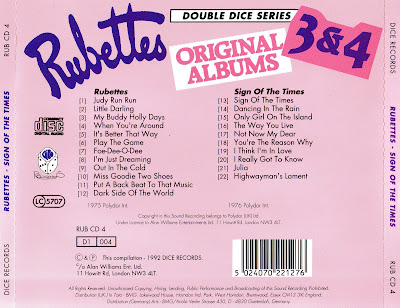