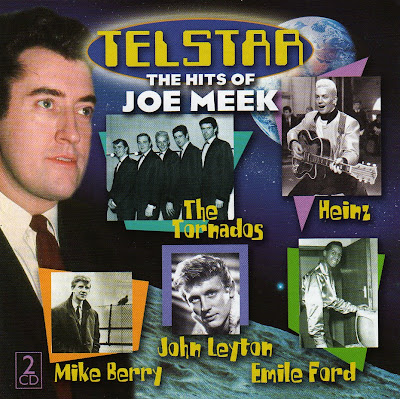 Includes Number One hits from John Leyton, Emile Ford, Lonnie Donegan,
and The Tornados (the all-time instrumental classic "Telstar", Margaret Thatcher's favorite record).
and RARITIES !! bonus from Jancy
Not an artist in the traditional sense of the term (he couldn't play or sing at all) producer Joe Meek has nonetheless been belatedly recognized as an important, even inimitable, figure of early British rock & roll. Like Phil Spector, Meek developed idiosyncratic production techniques that, much more than the artists he worked with, stamped a vision of mad genius on his recordings. In Meek's case, this usually amounted to super-compressed sound, wavering sped-up vocals, ghostly backing violins and choruses, spooky echo and reverb, ticky-tack variable-speed piano, and all manners of Halloween and outer-space sound effects. The recordings were all the more remarkable for being produced not in a state-of-the-art studio, but in Meek's own bedroom-sized facility, located over a shop within the flat he rented.
Meek couldn't rightly be compared to Phil Spector -- he favored gawky, dippy teen idol fare for gawky, dippy teen idols, not the gutsy soul- and R&B-infused Wall of Sound. But he was a trailblazer in his own right -- even before Spector, he set up shop as rock & roll's very first independent producer of note, making recordings on his own terms and leasing them to labels for distribution. In the United States, he only scored big with the Tornados' "Telstar" (the first British rock & roll record to top the American charts, a year beforethe Beatles) and the Honeycombs' "Have I the Right." In the U.K., he produced scores of records, many of them flops, and many others hits, for the Tornados, Honeycombs, Screaming Lord Sutch, John Leyton, Heinz, the Outlaws (featuring Ritchie Blackmore for a time), and many more. Highly prized by some collectors, Jello Biafra noted in the book Incredibly Strange Music, Vol. 2, "You can tell a Joe Meek record a mile away."
Meek's business and production methods may have been ahead of his time, but his actual musical tastes actually started to run behind the times with the advent of the self-contained groups of the British Invasion. He actually recorded a few respectable efforts in the R&B/mod vein, but his career was in a severe spiral by the time his life ended in tragic circumstances in early 1967, when he shot his landlady and himself. John Repsch's book The Legendary Joe Meek (published in the U.K. only) is a biography of this fascinating figure.~ by Richie Unterberge
http://www.joemeekpage.info/cd_60various/cd_meek_telstarhits.htm
Telstar: The Hits Of Joe Meek CD 1:
1. Johnny Remember Me - John Leyton
2. Be Mine - Lance Fortune
3. Just Like Eddie - Heinz
4. Walkin' with My Angel - Lee Starr & The Astrals
5. Bouzoukis - The Athenians
6. Globetrotter - The Tornados
7. What's News Pussycat - The Crying Shames
8. Can't Hear the Beat of a Broken Heart - Ian Gregory
9. Lonely City - John Leyton
10. Mr. Blue - David MacBeth
11. Garden of Eden, The - Gary Miller
12. Lover Return - Pete & the Boulevards
13. Don't Think Twice, It's All Right - Heinz
14. Ice Cream Man, The - The Tornados
15. Please Stay - The Crying Shames
16. Next Train out of Town, The - Betty Miller
17. What Do You Want to Make Those Eyes at Me For? - Emile Ford & the Checkmates
18. Tribute to Buddy Holly - Mike Berry & the Outlaws
Telstar: The Hits Of Joe Meek CD 2:
1. Telstar - The Tornados
2. Son This Is She - John Leyton
3. Don't You Think It's Time - Mike Berry & the Outlaws
4. September in the Rain - The Crying Shames
5. Time Will Tell - Ian Gregory
6. Diggin' My Potatoes - Heinz
7. You're My Girl - Pete & the Boulevards
8. Story of My Life, The - Gary Miller
9. This Love I Have for You - Lance Fortune
10. Robot - The Tornados
11. Wild Wind - John Leyton
12. Nobody Waved Goodbye - The Crying Shames
13. Questions I Can't Answer - Heinz
14. What'cha Gonna Do Baby - Jason Eddy
15. I Take It We're Through - Riot Squad
16. Little Baby - Blue Rondos
17. Cumberland Gap - Lonnie Donegan
18. How Will It End? - John Leyton
Posted by: D&J на 12:52