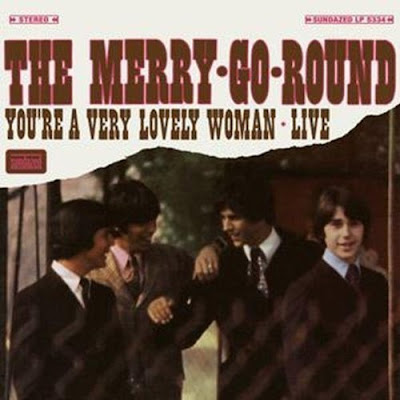 The Merry-Go-Round were formed in Los Angeles during the summer of 1966 when Palace Guard drummer Emitt Rhodes left that band and began rehearsing in the Rhodes family garage with his high-school buddy Gary Kato. After a couple weeks with friends Mike Rice and Doug Harwood on bass and drums, respectively, the duo hooked up with a couple of L.A. movers: bassist Bill Rinehart had played in the Leaves and drummer Joel Larson with the Grass Roots, and both had been in the short-lived Gene Clark Group in 1966 and later played on Clark's classic 1967 album, Gene Clark with the Gosdin Brothers. Rhodes, Kato, Rinehart, and Larson recorded demos that attracted label attention and led to a deal with A&M. "Live" was released as a single in early 1967 and quickly became a huge hit in L.A., and eventually reached number 63 in the Billboard singles chart. The B-side, "Time Will Show the Wiser," became somewhat well known too, as Fairport Convention cut a version on their 1968 debut album. 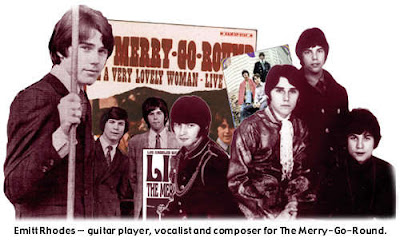 The band:
Emmit Rhodes (Lead Vocals)
Gary Kato (Guitar)
Bill Rinehart (Bass)
Joel Larson (Drums)
Their next single, the highly arranged and orchestrated "You're a Very Lovely Woman," didn't fare as well on the charts, hitting only number 90 in late 1967. A&M perhaps sensed that the window of opportunity was closing for the group and hastily released The Merry-Go-Round in November of 1967. The album, excellent though it is, consists of the singles, their flip sides, and assorted demos. The record stalled out at number 190 and Rinehart left the band soon after. He was replaced by Rick Dey, who had been with San Francisco band the Vejtables and also the Wilde Knights (the group that cut the original "Just Like Me," which Dey wrote and Paul Revere & the Raiders later had a big hit with). The Merry-Go-Round released two singles in 1968, "Listen, Listen"/"Missing You" and "Highway"/"'Til the Day After," but neither hit and they soon found that fewer fans were drawn to their shows and offers to play were drying up. After plans to release a second album dissipated, Rhodes disbanded the Merry-Go-Round in 1969 and began working on solo material.
His first album, The American Dream, contained solo tracks cut with session musicians as well as a few studio-sweetened Merry-Go-Round demos. Rhodes went on to release a handful of critically acclaimed solo albums, most notably the amazing Emitt Rhodes album from 1970. Gary Kato later formed Bullet and became a member of the group Derek, which had a hit with the bubblegum classic "Cinnamon." Rick Dey went on to do session work (including a stint working for the Monkees), recorded an album in the early '70s with his brother Tony and Barry Melton (of Country Joe & the Fish fame), and passed away in 1973. In 2005 reissue label Rev-Ola released Listen, Listen: The Definitive Collection, which rounded up all the group's recordings and paired them with Rhodes'  The American Dream
Emitt Rhodes : The Whole Store
The Merry-Go-Round/Emitt Rhodes
The Merry-Go-Round (1966-1969)
Merry Go Round: You're a Very Lovely Woman / Live
(aka Self -Titled 1967 amg track piks)
The Merry-Go-Round's self-titled 1967 album is a breathtaking blend of chiming folk-rock guitars, British Invasion harmony vocals, baroque pop arrangements, and pure pop songcraft that sounds daisy fresh in 2005. The Beatles are a huge influence, and there is plenty of McCartney in Emitt Rhodes' sweet vocals and their vocal harmonies. You can hear the Byrds a bit, some Left Banke (especially on the sweeping orchestral pop gem "You're a Very Lovely Woman"), some L.A. garage on rockers like "Where Have You Been All My Life" and "Lowdown"; the group definitely didn't exist in a vacuum. But there are some songs that are quite unique and original like "Time Will Show the Wiser" with its otherworldly sped up and backward guitars and enchanting melody, the bouncy and warm hit single "Live," and "Had to Run Around," an exquisite ballad whose tender beauty foreshadows Rhodes' classic 1970 Emitt Rhodes album. These songs, and the overall quality of the songs and the group's loose and earthy playing, help lift the album above the pack and should lead to it being mentioned in the same breath as Love's first album or Buffalo Springfield's first when talking about classic American debut albums of the '60s.
1. The Merry-Go-Round - Live (2:36)
2. The Merry-Go-Round - Time Will Show the Wiser (2:30)
3. The Merry-Go-Round - On Your Way Out (2:34)
4. The Merry-Go-Round - Gonna Fight the War (2:04)
5. The Merry-Go-Round - Had to Run Around (3:42)
6. The Merry-Go-Round - We're in Love (2:30)
7. The Merry-Go-Round - You're a Very Lovely Woman (2:54)
8. The Merry-Go-Round - Where Have You Been All of My Life (2:19)
9. The Merry-Go-Round - Early in the Morning (2:07)
10. The Merry-Go-Round - Low Down (3:00)
11. The Merry-Go-Round - Clown's No Good (2:24)
12. The Merry-Go-Round - Gonna Leave You Alone (2:21)
Album Description (amazon.com)
Among folk-rock devotees and power-pop cultists, Emitt Rhodes is a legendary figure with a powerful mystique. The prodigiously talented singer/songwriter/multi-instrumentalist first came to prominence as the teenaged leader of The Merry-Go-Round, a unique L.A. baroque folk-rock quartet whose lone 1967 album is now regarded as being in the same class as the debut discs of such '60s contemporaries as the Byrds, Love, the Left Banke and the Buffalo Springfield.
The Merry-Go-Round--which also included guitarist Gary Kato, ex-Leaves bassist Bill Rinehart and former Grass Roots drummer Joel Larson--scored an early hit with the infectiously jangly "Live." The song (which would be covered in the '80s by the Bangles) became a major regional hit in the Los Angeles area. "Live"'s equally distinctive B-side, "Time Will Show the Wiser," was covered the following year by Fairport Convention. The band's second single, the bittersweet, orchestrated "You're a Very Lovely Woman," was an equally impressive achievement.

Those three songs are all featured on You're a Very Lovely Woman, which offers a consistently intoxicating mix of Beatlesque vocal harmonies, ringing folk-rock guitars, sparkling songcraft and playful baroque and psychedelic touches.

Although The Merry-Go-Round would disband two years after releasing their only LP, the album has gained steadily in notoriety and prestige over the years. Original copies of the album have become rare collector's items, regularly changing hands for exorbitant prices among fans. Now, You're a Very Lovely Woman is once again available on vinyl to thrill longtime admirers and new fans alike. Mastered from the original analog tapes and pressed on high-quality high-definition vinyl, the album includes complete, meticulously reproduced original cover art.
The Merry Go-Round - Listen, Listen: The Definitive Collection
Note: Gene Clark is rumored (primarily by Johnny Rogan) to have participated in some recordings by the Merry Go Round. It is not clear which, if any of the recordings feature Clark. In the liner notes to the Merry Go Round compilation, the two primary members of the band credit Joel Larson with providing a third harmony part, and there is no mention of Clark ever participating with them. The band did, however, feature two former members of the Gene Clark Group: Larson and Bill Rinehart.
Posted by: D&J на 00:56