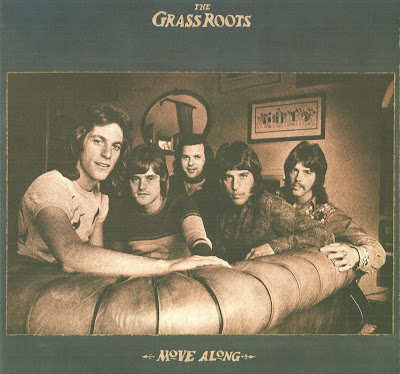 The final three Top 40 hits for the Grass Roots materialize on Move Along, a consistent album under the aegis of original co-producer Steve Barri with the band's future producers Dennis Lambert and Brian Potter writing two of the new hits. Slick arrangements and big production eliminate the charm of the earlier recordings, where P.F. Sloan and Steve Barri gave the group a nice mixture of the frosting poured atop once folky Simon & Garfunkel tracks by Clive Davis and the Top 40 shine Mickey Most gave to Herman's Hermits. That Sloan and Barri worked on Peter Noone's Hold On movie soundtrack, including their composition "A Must to Avoid" and an earlier version of "Where Were You When I Needed You," is a little proof of how they steered the original Grassroots. Peter Noone hit in January of 1966 with his Sloan/Barri material, the Grassroots in July of that year. The name evolved to separate the two words, becoming The Grass Roots, and six years on this very formula album has little surprise and none of the sparkle of the Sloan/Barri days, but it is not without merit. "Two Divided By Love" was a nice sequel to "Sooner or Later," which was a nice sequel to "Temptation Eyes," but the formula needed reshuffling. "The Runway," a variation on "The Letter" theme, is a clone of "Two Divided By Love"; it charted nine months after "Two Divided By Love," with the final track on this album, "Glory Bound," hitting the Top 40 in between (in March of 1972). The big hook of "Glory Bound" sounds like a precursor to latter-day '70s pop, surprising in that it has elements of what Lambert/Potter would bring to the Righteous Brothers in 1974, but this particular tune was the one co-write by Steve Barri, a departure from the cleverness he brought to earlier material. It's a far cry from Barri's "Things I Should Have Said," and that's the problem with Move Along. Where the fun of the early hits was their diversity and ingenuity, one can't help but get the feeling that this is an excellent bar band that somehow got a recording contract. Dennis Provisor wrote or co-wrote six of the 11 tracks, including "Glory Bound," and he just doesn't have the spirit that Sloan/Barri or Lambert/Potter provide. The difference is staggering. It's not to say that a tune like "Runnin' Just to Get Her Home Again" by Warren Entner and Dennis Provisor is that bad, but when one realizes that Entner would be managing Quiet Riot a decade later, Move Along is to the first Grassroots album what the latter-day Mystery album by Vanilla Fudge was to their original disc: a departure from the thing that made the band so significant in the first place. Dennis Provisor is not even given credit on the back of the album, though his contribution here was as pivotal as singer Rob Grill and guitarist Warren Entner. A better offering than the self-titled album for Haven/Capitol, and Grill is in better voice than on his solo effort, Uprooted. Had they sought songs with the durability of "The River Is Wide" or the charm of "Bella Linda," it would have been a plus with the three hits included here, and could have insured a better place in rock history for this interesting and still listenable project. 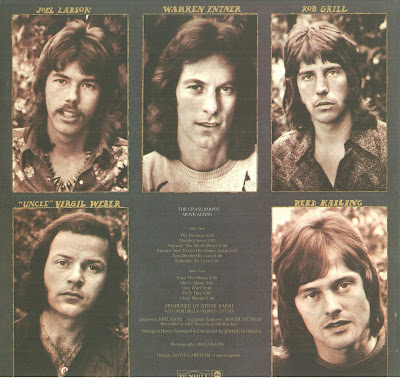