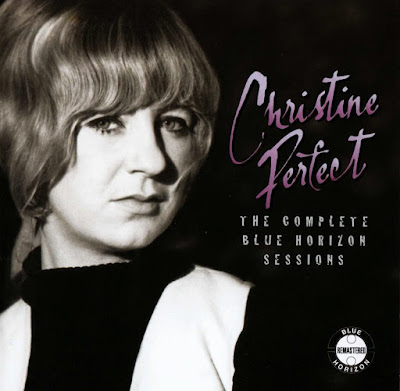 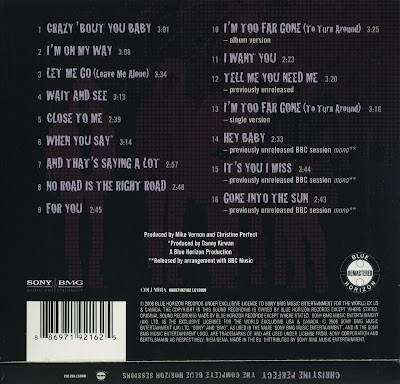 ....Before there was Christine McVie and before Fleetwood Mac became international superstars there was Christine Perfect.
Christine Perfect would rise to fame to England as the keyboardist/vocalist for the rock/blues group Chicken Shack. She would be honored as English female vocalist of the year two times and leave the band in 1969. By 1970 she married bassist John McVie and joined his group Fleetwood Mac. As a writer, singer, keyboardist for the band she would contribute to several of the best selling albums of all time including Rumours which has sold close to twenty million copies.
In between her membership in Chicken Shack and Fleetwood Mac she would record a number of tracks for the Blue Horizon Label, but would issue only one solo album for the company. Now The Complete Blue Horizon Sessions has gathered together all 16 tracks from her time with the label including four that have remained unreleased.
This is not the complete pop Christine McVie of her classic Fleetwood Mac Days. Rather she is a gritty, blues style vocalist. Despite this, many of the songs hint at the musical evolutionary road that she would travel during the next ten years. She wrote nine of the sixteen tracks and much of the music would show the beginning of a pop leaning which would increasingly dominate her compositions.
The first two tracks set the tone for the album. “Crazy ‘Bout You Baby” features her smooth flowing keyboards and some subtle brass in support of a bluesy vocal. “I’m On My Way” is a slow blues number with a sultry style and minimal instrumental backing.
“No Road Is The Right Road” is the strongest of her original compositions. There is some nice piano and bass interplay with a classic vocal delivery. The old Chuck Jackson rhythm and blues song, “And That’s Saying A Lot,” provides the vehicle for one of the sexiest songs of her career. “Wait and See” is a moody track with minimal piano backing....