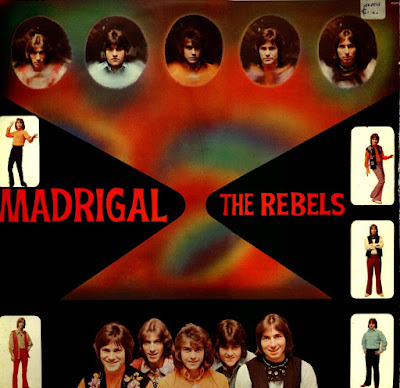 
Downsizing is a bitch.  Just ask Larry.  The Larry that used to be CEO of Larry’s Rebels, of Australian garage beat and “A Study in Black” fame.  Downsizing and streamlining cost him his job, and here, on the band’s second album from 1969, they’re simply known as “Rebels”, sans Larry.  They were less honest with the album title, though, calling this one “Madrigal”, which, according to Webster’s, it ain’t.  A “madrigal” is defined as either 1) a short love poem set to music, or 2) a song for two or three unaccompanied voices.  Well, I would exactly call the very anti-PC “Little Fairy Michael” a “love poem” per se, and I certainly wouldn’t tell the bassist, lead guitarist or drummer that the vocals are “unaccompanied”, so this really ain’t no madrigal at all.  But then again, was the first album really a “study in black?”  Honesty issues aside, I also gotta say, “Madrigal” is a thousand times better than “Study in Black” – even if it doesn’t yet have that first album’s reputation, probably because black is a lot cooler than a medieval love poem.
There’s a heavy British freakbeat soul sound that permeates most of Side 1, starting off with a faithful and impassioned cover of Spooky Tooth’s “Forget It, I Got It” (good taste, guys).  Running the Beatles “ Good Day Sunshine” through the same heavy soul blender makes for an interesting reinterpretation, and the slow gospel-tinged passionate outcome sounds a lot like Joe Cocker’s cover of “With A Little Help,” only better.  And darn near unrecognizable too, if you hadn’t checked the credits.  Likewise the Rebels’ gospelly rave-up of the Bee Gees “To Love Somebody”, which is nicely de-wimped and puts a little hair on the chest of the Brothers Gibb.
Side 2 takes more chances, and cuts down on the covers, however good they are.  “Passing You By” goes full-fledged freakbeat, with a killer heavy pounding rhythm and deliciously soulful vocals.  The closest they get to an actual “madrigal” is the amazingly un-politically correct “Little Fairy Michael”, a superb floaty slab of British toytown popsike, all harmonies, flute and Morse Code organ stabs set to a pastoral English countryside shuffle.  It’s a delicate, light and airy bit of English whimsy, much like little fairy Michael himself, and the fact that the Rebels come from the macho land Down Under instead of anywhere else probably goes a long way toward explaining the sentiments.  In fact, without Larry, they probably didn’t even know what “madrigal” meant.

Larry's Rebels were one of the most successful 1960s bands in NZ, mixing up garage, psych and pop. They remained a major New Zealand act until the end of 1968, although personal relationships were beginning to deteriorate. By Christmas it was agreed to split up into two entities, Larry Morris as a solo act and the Rebels as a quartet. A farewell single was released at the beginning of 1969, with "Mo'reen" on the A-Side and a Larry-less quartet number "By The Time" on the reverse (also for sale this week). The single reached number 11 on the National Charts in February and that was it for Larry's Rebels.
For a time it appeared that the split was healthy for both camps. The Rebels enlisted Glyn Mason, formerly with the Bitter End and Jigsaw, as their new leader and recorded a song called "My Son John" (also for sale this week). The single raced all the way to number one on the National Charts. The flip-side was a good thumping psych rocker called "Passing You By". Both tracks appeared on Madrigal, the Rebels album which came out instead of the long promised second Larry's Rebels album.
By the time the album was released, the Rebels were resident in Melbourne and had been signed to do a one-off single over there. The single was "Can You Make It On Your Own"/"I Can See The World". When it sunk without a trace in New Zealand as well as Australia there didn't seem much point carrying on. Bookings became sparse, and the old spark had basically gone. In January 1970, they were no longer. Viv got married and went on a honeymoon, John and Nooky returned to New Zealand for a long rest. Mal and Glyn remained in the music field in Australia. Mason went on to join Chain, Home, Copperwine, Ariel and Stockley, See and Mason, while Logan moved through Healing Force, Carson, Renee Geyer Band and the Little River Band. 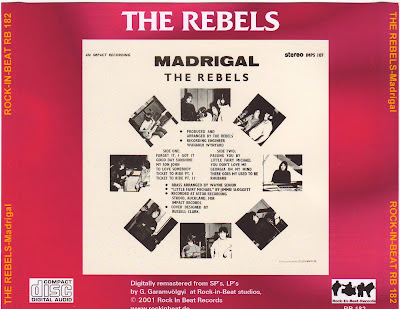 tags Rock In Beat, The Rebels