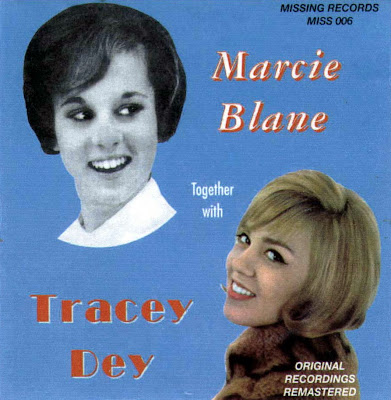 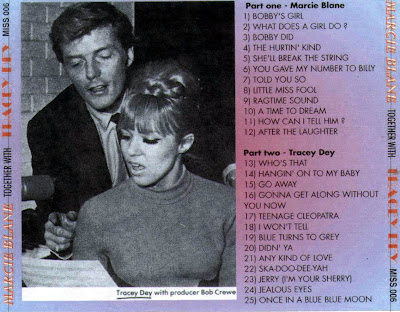 12 tracks by Blane with 13 by the even more obscure 1960s girl-group-style vocalist Tracey Dey. Nothing else has the hooks that made "Bobby's Girl" (which is here, of course) a hit, and Blane's slight, girlish voice doesn't make the material into anything more than it is. If you're a huge 1960s girl group/girl singer fan, though, it's certainly representative of the sound of an era, with production that fairly screams 1962-63 -- not quite part of the teen-idol era, but not quite as modern as Phil Spector (or even the Shirelles) either. "She'll Break the String" and "After the Laughter" are the only tunes that would even cut the ice as items on compilations of decent or half-decent overlooked girl-group recordings; the rest are pretty meaningless. Tracey Dey's half of the CD, incidentally, is considerably better, with some fairly good obscure girl-group-style singles (such as "I Won't Tell"), which could tip the balance in favor of purchase if you collect this genre.
****
********************************************
Marcie Blane 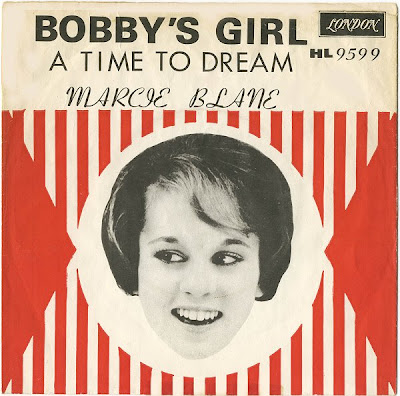 A singer who crossed the teen idol sound with a light girl group flavor, Marcie Blane had one huge hit, "Bobby's Girl," which made number three in late 1962. The single was saccharine, but incessantly catchy, with its low tremeloed guitar riffs; doofy male "You're not a kid anymore!" backup interjections; and Blane's wholesome vocals, preceded by some melodramatic spoken lines. She released about half a dozen other singles on the Seville label, several written, like "Bobby's Girl," by the Klein-Hoffman team. None were hits, though, and none were remarkable, falling into the most lightweight sector of the girl group trend.
http://allmusic-wingsofdream.blogspot.com/2010/08/marcie-blane-bobbys-girl-complete.html
http://en.wikipedia.org/wiki/Marcie_Blane
Tracey Dey 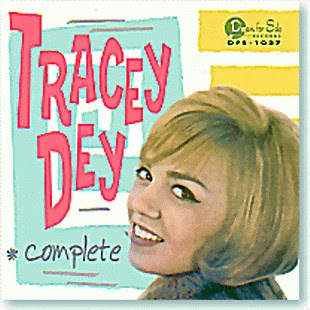 One of the more talented girl group-styled solo singers of the 1960s who never got a big hit, Tracey Dey never even made the Top 50, although three of her singles got to lower chart positions. Her "I Won't Tell" is one of the top ten non-hit girl group singles of all time, with its great catchy chorus, full-stomping production, surprise false ending, and assertive singing. "I Won't Tell," like several of Dey's singles, was written by Bob Crewe and Bob Gaudio, the same team responsible for penning most of the Four Seasons' big hits. Crewe also helped write some of Dey's singles even when Gaudio wasn't involved, and certainly tried to give Dey a shot, producing discs for her on Vee Jay, Liberty, and Amy. Dey was certainly better than most girl group singers of the time that didn't make it, and better than some that did, with a full and mature voice. She and Crewe didn't get that one piece of outstanding material that might have set her on course for a successful career, though, and when they did (with "I Won't Tell") it didn't catch on as it should have. Much of Dey's 1960s material is available on a hard-to-find CD that also includes tracks by one-shot early-'60s singer Marcie Blane.
Tracey Dey - The Singles Collection
http://en.wikipedia.org/wiki/Tracey_Dey
BONUS
Tracey Dey - The Singles Collection 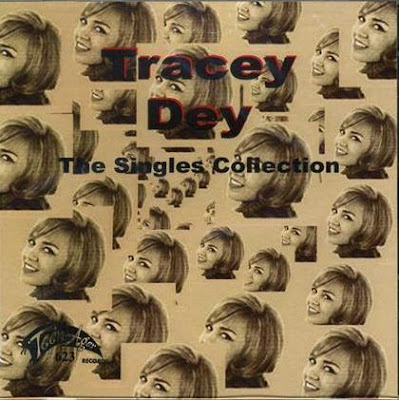 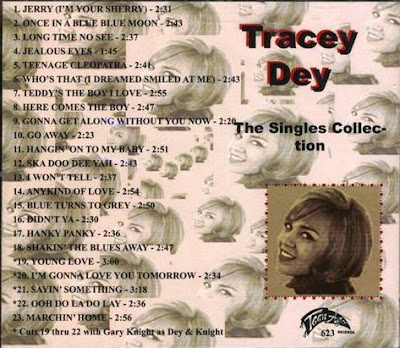