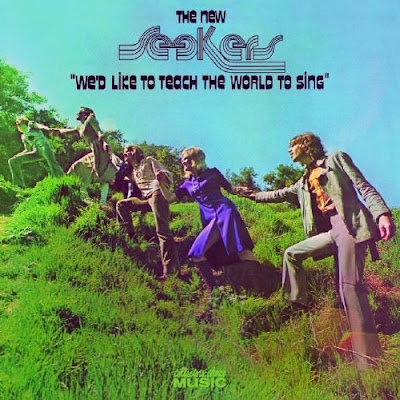 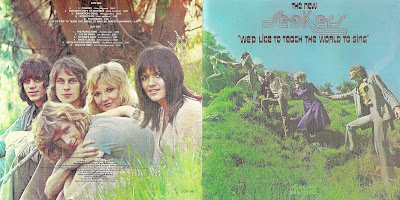 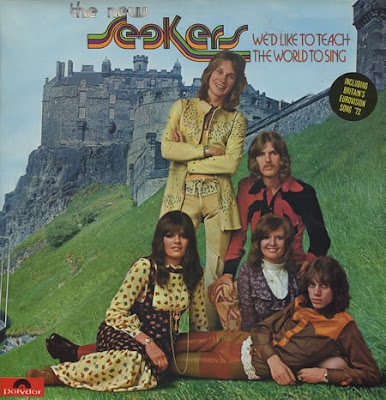 Known chiefly for making a Coca-Cola jingle into a massive worldwide hit, the New Seekers ostensibly grew out of the ashes of the Australian folk-rock outfit the Seekers ("Georgy Girl"). Although their clear harmonies, pop leanings, and squeaky-clean image were similar to the original band, their actual connection was tenuous at best. After the Seekers disbanded, guitarist/vocalist Keith Potger put together an otherwise completely new band in late 1969: female vocalists Eve Graham and Sally Graham (no relation), guitarists/vocalists Laurie Heath and Marty Kristian, and bassist/vocalist Chris Barrington. Potger christened them the New Seekers and produced their self-titled 1970 debut album, and while he did sing with them at first, he soon retired from both performance and production to become their manager, leaving them with no members of the original Seekers. His last appearance was on the ironically titled follow-up Keith Potger and the New Seekers, which was issued before the end of the year and featured numerous personnel changes; only Eve Graham and Marty Kristian remained, joined by singer Lyn Paul and guitarists/vocalists Paul Layton and Peter Doyle.
Thus constituted, the New Seekers scored their first American hit with a cover of Melanie's "Look What They Done to My Song, Ma" in late 1970. They toured the U.S. in early 1971 and appeared on several variety shows, and the title track of Beautiful People was a significant follow-up success; they also broke through in the U.K. later that year with a version of Delaney Bramlett's "Never Ending Song of Love." Their biggest success, however, came from an unlikely source: an ad jingle they recorded for Coca-Cola, which became part of a hugely popular campaign that summer -- so popular, in fact, that radio listeners actually called in to request the commercial. It was decided to release the song as a single called "I'd Like to Teach the World to Sing (In Perfect Harmony)," with the lyrics rewritten to remove product references. Since the New Seekers were unavailable at the time, a country-tinged version by the Hillside Singers was actually released first. the New Seekers recorded their own version while touring America toward the end of the year, and since it naturally sounded more like the commercial, it proved the bigger hit, reaching the U.S. Top Ten despite stiff competition from the alternate recording. Helped by the ad campaign, "I'd Like to Teach the World to Sing (In Perfect Harmony)" was a smash hit all over the world, topping the charts in several countries (including the U.K.) and giving the New Seekers their biggest hit ever.
In 1972, the New Seekers placed second in the annual Eurovision Song Contest with "Beg, Steal or Borrow," which was their highly successful U.K. follow-up to "I'd Like to Teach the World to Sing"; the title track of Circles was another hit that summer. the New Seekers kicked off 1973 by playing Richard Nixon's inaugural ball, but subsequently tried to hip up their image and gain a little more critical respect by recording more rock-oriented numbers (including material from the Who's Tommy) on Now; it didn't work, and their sales began to slip as a result. Peter Doyle left the group that summer and was replaced by Peter Oliver. The singles "You Won't Find Another Fool Like Me" and "I Get a Little Sentimental Over You" (featured on the 1974 album Together) returned them to the U.K. Top Ten, but both female singers (Eve Graham and Lyn Paul) decided to leave the group in early 1974. They embarked on a farewell tour of the U.K. that spring, and entered the studio one last time to record The Farewell Album, which was issued that summer after they had officially disbanded.
That wasn't the end of the New Seekers, although it was the end of their commercial prime. The group re-formed in 1976 with original members Eve Graham, Marty Kristian, and Paul Layton, plus newcomers Kathy Ann Rae and Danny Finn. They recorded the album Together Again and began playing the U.K. cabaret circuit with other non-rock pop acts. While they would land a few minor hits over the next two years, none were on the scale of their previous successes, and after one final album, 1978's Anthem, Graham and Finn left the group to marry and perform as a duo. With their departure, the New Seekers effectively ceased to be an active recording concern. Kristian and Layton continued to lead various New Seekers lineups into the '80s and sporadically during the '90s, but despite continued world tours, they were strictly a nostalgia act. Peter Doyle died of throat cancer on October 13, 2001. 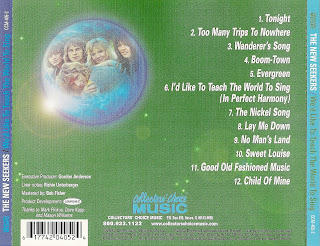 We'd Like to Teach the World to Sing by New Seekers is actually their earlier New Colors album with the fifth track on side one, "Move Me Lord," moved off in favor of the group's remake of their Coca Cola commercial. In one of the most interesting moments in pop music, both the Hillside Singers on Metromedia Records and New Seekers on Elektra got into the Top 40 at the same point in time with the exact same song. As commercials keep infiltrating movies, this Top Ten hit for New Seekers was actually a harbinger of things to come three decades after. It also beat out the Hillside Singers, who brought the same tune to the Top 15 the week before. But there's a certain genius to it all, come to think of it. Inundated with the melody via incessant ads, one almost can hear "Coca Cola" in the song, or strain to think the group is singing, "It's the real thing." In Britain, Ray Davies had to remove the name "Coca Cola" and replace it with "cherry cola" in the Kinks' song "Lola" for airplay on the BBC, but no such problem exists here. The marketers made the persistence of memory so overwhelming that the listener knew this wasn't a Pepsi jingle. Side one of the disc is not as solid as the flip, though things start strong with R. Wood's "Tonight" and a nice reading of Richard Kerr's "Evergreen." Peter Doyle's labored vocal and song "Boom-Town" might've served this project better by getting the axe rather than the song that did, "Move Me Lord," though the songwriting royalties on an album with a monster hit may have been what gave this little doggy the nod. Here was an opportunity to fill out half of side one with an extended remake of one of singer Buzzy Linhart's favorite titles, the original Seekers' "I'll Never Find Another You." Now that would have put this effort over the top and Linhart could have guest starred as well, because Doyle, Paul Martin Layton, and Marty Kristian, along with Lyn Paul and Eve Graham, don't get much help from the other material on this side of the disc. Melanie Safka's "The Nickel Song" leads off side two and it is one of the highlights, the group having hit with Safka's "Look What They've Done to My Song, Ma" the year before. Peter Doyle's "Lay Me Down" isn't a bad tune either, with Lyn Paul taking the lead vocal and the group showing that they can compose as well. Eve Graham and Peter Doyle take the leads on the country-ish "Good Old Fashioned Music" and the very pretty album-closer "Child of Mine." This latter-day New Christy Minstrels was more of a middle-of-the-road vocal pop group in the style of the original Seekers than folksingers, and the impeccable voices sweep in and out with the strings and perfect instrumentation. It was also during the time that the hit record ruled, so all in all, We'd Like to Teach the World to Sing is an acceptable and respectable outing.
Posted by: D&J на 19:01