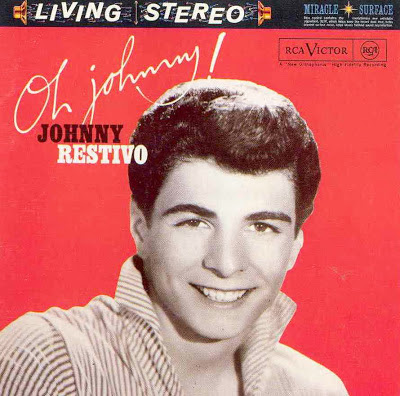 Johnny (John Charles) was born in the North Bronx, New York September 13, 1943. He enrolled in Cliffside Park Junior High School, New Jersey and was graduated in June of 1958.

Johnny and his 9 year younger brother Gerard were sons of Jack and Jeanette Restivo. In 1959 Johnny was discovered by Joe Mulhall and Paul Neff and in June 9, 1959 he recorded "The Shape I'm In" and "Ya, Ya" at RCA only 15 years old with Paul Simon (aka Jerry Landis) playing his guitar. In 1960-1961 Johnny was on tour in Australia. He played in Sydney, Melbourne, Canberra and Perth as well as many other places while there. From there he also had engagements in South America, Chile, Argentina, Brazil and Belgium. While in Argentina he hosted his own variety television show called "The Johnny Restivo Show". The program was on the air for 3 years from 1961-1963 and was sponsored by the Coca Cola Company. Between 1962-1964 even while doing the television program Johnny found time to play at the South American "Copa Cabana" club in Rio and the Waldorf in Santiango, Chile. He also performed in Uruguay and Brazil.

Johnny went on tour beginning in 1963. His first country of this multi-country tour was South Africa. He visited Kenya, Southern Rhodesia and Johannesburg. This part of the tour lasted about 6 months. While in Johannesburg during 1963-1964 he recorded an album on the RCA label entitled "Spotlight On Johnny Restivo". In 1965 he went on to London, England, where he performed at the London Palladium as well as many other venues. During the years of 1965-1966 London became Johnny's home base for the next leg of his tour. From there he spent 2 months touring Israel. One of the places he performed at was the Caliph Club in Jaffa. He also had engagements in Eilat. Then it was on to Italy for a multi-city tour working through the "Johnny Pangazio Agency". After completion of the Italian segment of his tour he went on to Paris, France, for a short stay. In 1967 the final leg of the tour took him back home to the USA. Once back home in New York City Johnny was represented by many different agencies including the William Morris Agency. He mostly worked nightclubs, resorts and cruises throughout the USA.

In 1969 Johnny was drafted into the United States Armed Forces. He did his basic training in South Carolina and Advanced Infantry Training in El Paso, Texas. He was then stationed in Heidelberg, Germany. He inquired about Special Services, auditioned and was accepted into the 7th Army Soldiers Chorus. Touring again but now for the US Army. He visited Germany, Austria, Holland, Belgium and Italy.

In 1971 Johnny took a European discharge and remained in Europe for the next 6 months, after which he headed back home to the USA. In that same year Johnny and Gerard began working together, Gerard as his drummer and musical director, as he attempted to get his career back on track. They did primarily club dates, hotels and resorts throughout America. They also travelled to Mexico and Puerto Rico as well as playing cruises in the Caribbean. During many of the recording sessions that were done in New York City, Gerard was allowed to stay in the recording studio with Johnny or sit with the drummers where he quitely would watch, listen and learn about show business and the recording industry. It was in those very early years that Gerard decided he was going to be in show business and more importantly that he was going to work with his brother making music.

In 1978 Johnny formally ended his career in show business after a performance at the Nevelle Hotel in the Catskill mountains town of Ellenville, New York. During these years and beyond, Johnny has been married and divorced 4 times and has 3 children from oldest to youngest: Kelli Hope, Darin and Brandon. He has been in business for himself since 1981 with "Rockland Mattress", which sells bedding, headboards and beds. And now in 2002, Johnny finds himself preparing to retire and move permanently to the state of Florida (he always wanted to be in a warm climate). He now spends most of his time playing golf and winding down.

I'm in great debt of gratitude to John and Gerard Restivo for all supports indeed. 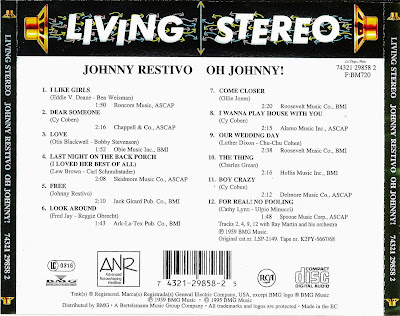