King Richard & The Knights - Precision! (Plus Other 60's Albuquerque Groups) 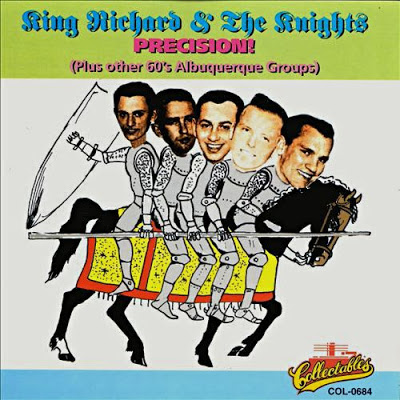 The Knights (a.k.a. King Richard and the Knights) had its beginnings in 1961 in Albuquerque, New Mexico (U.S.A.), during a time when instrumental rock ruled the world with The Ventures and The Fireballs leading the way. Thus, the band (or combo as it was called back then) became a Ventures/Fireballs-style band, playing 40 to 50 instrumental guitar songs per gig with no vocals other than a Chuck Berry tune here and there to break the monotony.
By 1964, the band finally developed an identity and released "Precision" on a little label called Red Feather Records. This guitar instrumental with a classical piano accompaniment performed by the studio engineer, Dave Bonham, became a regional hit (chiefly due to the unique combination of these two music genres) and set the record for the most time at number one for a local release on the then ruling Albuquerque, New Mexico rock-and-roll AM radio station, KQEO. But when the Beatles invaded the U.S. in Feb. of 1964, it was a bad omen for The Knights. As many other bands at the time followed Ken Fisher in his "Learn it, Do it, and Profit from it" mantra the Knights just couldn't give up their beloved rock instrumental efforts. After a few notable vocals on John Wagner Studios' Delta Records, the band disbanded in 1967.
King Richard (Dick Stewart), however, jumped on the psychedelic-rock bandwagon, not as a guitarist, but as a fanzine publisher (The Lance Newsletter), a record label owner (Lance Records), and a record distributor and promoter for other local labels. Although Stewart had a successful two-year-run with those companies that included a number of psychedelic and R&B 45- rpm releases by Albuque rque artists, who became well known in the Southwest U.S. during the mid-'60s, he, nevertheless, turned his back temporarily on rock and roll and directed his attention to another music genre: Mexican-American rancheras and tr aditional Latin music of Central and South America. Thus, Dick replaced Lance Records with another label (Casanova Rec ords), releasing an impressive number of vinyl albums and singles from 1968 to 1972. Many were hits in the Latin market throughout the U.S. and Mexico, including so me guitar instrumental efforts by Stewart himself, who was also a Casanova artist.
After two decades of performing with his two sons (Jason and Richard) in groups Dick named, Knee Deep, The Mountain Riff-Raff, and The Jyck Monkey Band (pronounced "jick"), the boys burned out on their dad's genre of music and moved to Austin, Texas in 1994 to further their own music careers. Shortly thereafter, Dick Stewart contacted one of the original bass players of the early Knights (Gary Snow) and asked him if he would be into taking a trip back to their '60s guitar instrumental roots. Gary jumped at the chance and beginning in late 1997, they both dedicated a year of intense on e-on-one practices relearning early '60s Ventures' and Fireballs' covers.
From 1998 to the present, Dick Stewart has written more than 40 instrumentals and created a number of guitar instrumental arrangements with covers of standout melodious songs of the late ‘50s and early ‘60s, many of which were originally released as vocals. At the close of 1998, Stewart and Snow scored big with a very talented Albuquerque drummer (Steve Hudgins) who owns a garage sound studio (literally). Although he was only two years old when The Knights originally formed, he picked up on the early '60s guitar instrumental style with ease and great interest.
GROUP MEMBERS

(1961 to 1964) GUITAR ROCK INSTRO PERIOD: (During a time when the band specialized in guitar-rock instrumentals, a genre now referred to as surf rock) Dick Stewart - lead guitar; Larry Longmire - rhythm and second lead guitarist; Gary Butler - bass (1961 - 1962); Gary Snow – bass (1963 - 1964); William "Corky" Anderson - percussions
(1965 to 1967) FRAT ROCK VOCAL PERIOD: (During a time when the band was known as King Richard and The Knights) Dick Stewart - lead guitar and vocalist; Jack Paden and Les Bigby - percussions; John Milligan followed later by Dick Miller - rhythm and second lead guitars; Jerry "Toad" Hutchins - bass; Larry Reid - sax and lead vocalist; Mike Celenze - keyboards
45 RELEASES FROM 1964 THROUGH 1966
1. 1964 - "Precision" b/w "Cut Out" (Red Feather 18401) guitar rock instrumentals
2. 1965 - "Lonely by The Sea" b/w "Moonbeam" (Red Feather) - guitar rock instrumentals
3. 1965 - "Those Things You Do" b/w "I Want to Love You" (Delta R-2048) - frat rock vocals
4. 1965 - "Why" b/w "That's the Way it Goes" (Delta R-2115) - frat rock vocals
5. 1966 - "I Don't Need You" b/w "How About Now" (Delta R-2143) - frat rock vocals
6. 1966 - "Work Out Sally" b/w "The Weatherman's Song" (Lomas R-2133) frat rock vocal and children's novelty song
CD AND VINYL RELEASES SINCE 1996
1. 1996 - "Precision" (Collectables 0684) A nineteen-track CD reissue compilation of early to mid-'60's 45 releases by New Mexico artists out of which twelve are Knights' efforts.
2. 1999 - "I Don't Need You" (Lance 2000) A fourteen-track 12" vinyl reissue compilation of The Knights '60's 45s plus two ‘80s tracks.
3. 1999 - "Surfin' the Web" (Lance 2001) A ten-track CD album of newly recorded surf guitar instrumentals in the early '60s traditional style.
http://www.lancerecords.com/bio.htm
http://www.lancerecords.com/history.htm
King Richard & The Knights - Precision! (Plus Other 60's Albuquerque Groups)
1 King Richard & The Knights – I Don't Need You
2 King Richard & The Knights – How About Now
3 King Richard & The Knights – Why
4 King Richard & The Knights – That's The Way It Goes
5 Plague, The  – Go Away
6 Era Of Sound – Girl In The Mini Skirt
7 Kreeg, The – Impressin'
8 Sidewinders, The  – Tears From Laughing
9 Sidewinders, The  – Charley Aikens
10 Saliens, The – Travel Lightly
11 Saliens, The – Baby Says
12 King Richard & The Knights – Those Things You Do
13 King Richard & The Knights -  I Want To Love You
14 King Richard & The Knights – Precision
15 King Richard & The Knights – Cut Out
16 King Richard & The Knights – Moon Beam
17 King Richard & The Knights – Lonely By The Sea
18 Jason Stewart  – The Calm And The Storm
19 King Richard & The Knights – Moonbeam (with vocals)
This Albuquerque, NM outfit, also known as the Knights, outlasted most of its contemporaries, albeit with a 30-year hiatus in the middle, mostly by virtue of the quality of their singles, which turned them into local stars. King Richard & the Knights started out in 1961 as a Ventures-type instrumental outfit, playing surf instrumentals and throwing in the occasional Chuck Berry-authored vocal number for variety. By 1964, they'd evolved sufficiently to rate a recording contract with Red Feather, who scored with the Knights' first release, "Precision," which became a regional hit in the southwest and rode the number one spot on Albuquerque's top radio station for weeks. The band's classic lineup consisted of Dick Stewart (aka "King Richard") on lead guitar and vocals, Larry Longmire on lead and rhythm guitar, and Corky Anderson (later succeeded by Jack Paden) on drums, and Larry Reid on saxophone and some vocals. The group's bassists included Gary Butler and Gary Snow.
The advent of the British Invasion took the wind out of the band's sails. The group tried to compete by switching to vocals, and began playing frat rock standards. They recorded a trio of singles for the Delta label, displaying a fairly diverse sound, encompassing elements of country and harmony vocals that showed the heavy influence of the Everly Brothers, but after "I Don't Need You" b/w &"How About Now" in 1966, their recording career was over. By the end of 1966, the Knights were history -- Dick Stewart went on to produce the Kreeg, while Anderson and Paden remained active for years after in local music circles, and the former still plays. Thirty years later, Dick Stewart and Gary Snow re-formed King Richard & the Knights, cutting a new album with drummer Steve Hudgins, its release accompanying the reissue of the group's classic sides on Collectables, and even vinyl reissues of their early sides in Europe. The re-formed group remains active on the Lancer label.
http://www.60sgaragebands.com/scenesthings/lancerecords.html
Posted by: D&J на 15:46