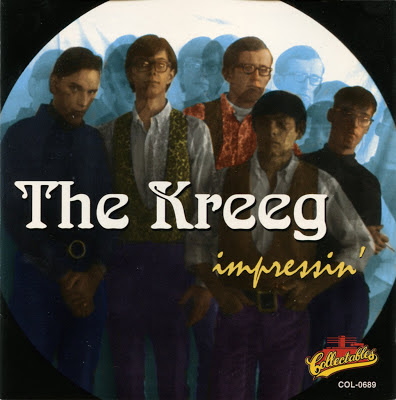 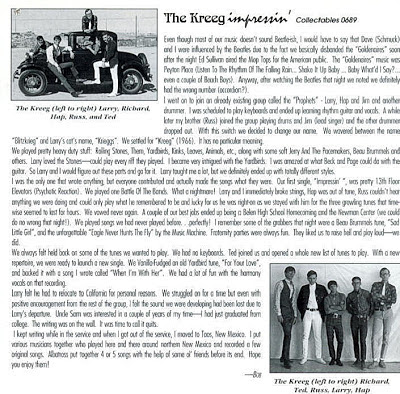 The Kreeg were an extremely talented garage rock outfit formed in Albuquerque, NM, in 1966, out of another local band called the Prophets. Their lineup consisted of Bob Sturtcman (rhythm guitar, vocals), who'd previously played with another band, the Goldenaires, Hap Blackstock (bass, vocals) (later succeeded by Ray Trujillo), Larry Inks (lead guitar), and Russ Sturtcman (drums). When the Prophets elected to change their name, it had been Bob Sturtcman's idea to call the band Blitzkrieg, but after kicking it around a bit, that was shortened to the Krieg and, finally, the Kreeg, which everyone liked.
Although all of them would admit to being heavily influenced by the Beatles at some point, by the time they'd turned into the Kreeg, the members were listening a lot harder to Them, the Yardbirds, the Rolling Stones, the Kinks, and the Animals, as well as absorbing the more sophisticated sounds that acts such as the Beau Brummels and the Leaves were bringing to the table. The resulting sound, in their hands, freely crossed between blues-influenced garage punk and folk-rock, with pleasing elements of both evident on their records.
Bob Sturtcman wrote some songs, and they recorded a few demos and had the honor of being the first band signed to Dick Stewart's newly founded Albuquerque-based Lance Records, and their debut record, "Impressin'" b/w "How Can I," did well enough locally that Lance soon became the home to most of the best rock music talent in the area. For their part, the Kreeg were successful enough to make something of a steady part-time living playing frat parties and high school homecoming dances, but weren't able to make the leap to the next level, at least not before lead guitarist Larry Inks decided to move to California, which began the disintegration of the group. The additional influence of the military draft, which was breathing down the necks of Bob Sturtcman and a couple of the others, didn't help, and by the end of 1968 the Kreeg were history.
Bob and Russ Sturtcman worked together in Mother Sturtcman's Jam and Jellies in 1968 and 1969, and then in an outfit called Albatross, based in Taos, NM, during the early '70s, and in the 1990s, a collection of Kreeg recordings, demos, and live tracks entitled Impressin' was assembled on CD by Bob Sturtcman and Dick Stewart and released by Collectables. The latter, which included good annotation and extensive discography and personnel information, was notable as one of the few garage band discoveries of the era to live up to the reputation surrounding the band. 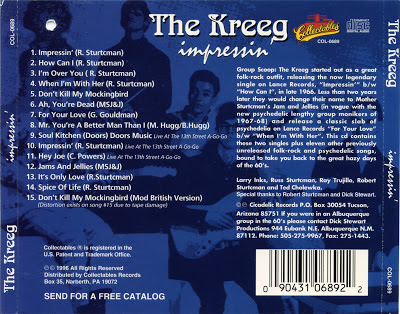