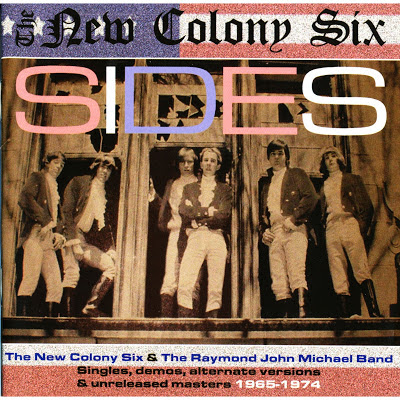 Chicago's New Colony Six originally emerged as a tough, British Invasion-styled outfit prominently featuring Farfisa organ and a novel (at the time) Leslie guitar. Scoring a huge local hit with "I Confess," their early recordings -- exemplified by their 1966 debut album, Breakthrough -- featured first-class original material that gave the sound of Them and the Yardbirds a more commercial, American garage-based, vocal harmony approach. The rest of the '60s saw the band gradually abandoning its roots for middle-of-the-road pop with horns and strings. Continuing to rack up major local hits and minor national ones, they finally cracked the U.S. Top 30 with "Love You So Much" (1968) and "Things I'd Like to Say" (1969). 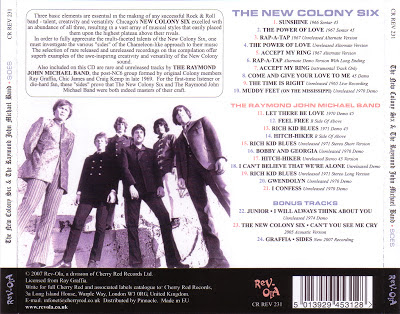 The New Colony Six started out as one of the better garage bands to come out of the Midwest in the mid-'60s, playing tough British Invasion-style rock & roll (their "At the River's Edge" made it onto the Nuggets box set), and they later evolved into a surprisingly sophisticated and skillful pop group that scored nationwide hits with the singles "Love You So Much" and "Things I'd Like to Say." However, this collection of odds and ends doesn't quite play to either side of the band's personality; in fact, most of the 24 songs aren't actually by The New Colony Six, with 11 tunes by the Raymond John Michael Band (which featured three NC6 alumni, singer Ray Graffia, drummer Chick James, and keyboard man Craig Kemp) and one each by Junior and Graffia, both latter-day Ray Graffia projects. The compilers also present a number of tracks in multiple versions, which gets a bit tiring; "The Power of Love," "Accept My Ring," and "Rap-A-Tap" by The New Colony Six all appear twice, while there are two different takes of "Hitch-Hiker" by the Raymond John Michael Band, and their cover of Terry Reid's "Rich Kid Blues" shows up no less than three times. Given the plentiful supply of alternate takes and recordings by post-New Colony Six acts, Sides is clearly for hardcore NC6 fans only, but that's not to say they won't enjoy this collection; there's a charging live recording of the New Colony Six rarity "The Time Is Right," "Come and Give Your Love to Me" is a fine high-attitude rocker, most of the Raymond John Michael Band material sounds like a solid if slightly over-polished variation on the latter-day NC6, "Bobby and Georgia" and "Gwendolyn" are witty novelty numbers, and Graffia's "Sides" is an admirably ballsy hard rock number. In short, if you're looking for The New Colony Six's greatest hits, steer clear of Sides, but if you're a committed fan looking for some choice rarities, you'll find them on this collection.