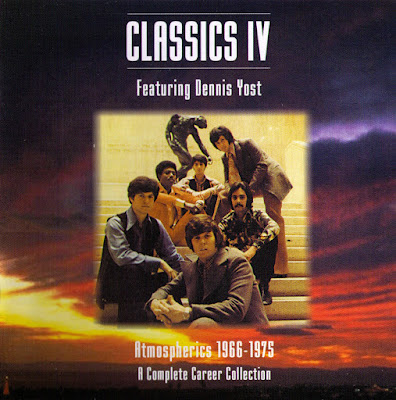 Anyone who doesn't have a clear image of the Classics IV can be forgiven -- they went through so many shifts in personnel and sound (not to mention a name change after they'd started recording), they were little more than a name attached to some excellent (and very good-selling) records of the second half of the 1960s, without a personality or identity to grab onto easily.

Although they're considered a late-'60s phenomenon, owing to the chronology of their hits, the group can trace its roots back to R&B harmony (i.e., doo wop) music of the late '50s. Detroit-born, Florida-raised Dennis Yost, who joined on drums and moved into the singer's spot, came from a Jacksonville-area band called the Echoes; he was just old enough to remember '50s R&B when it was current and, among many other groups, loved the Five Satins; and in addition to playing the skins, he sometimes liked to sing when the calls came for a '50s number like "In the Still of the Night." After his own group broke up in the mid-'60s, Yost joined a band called Leroy & the Moments, which included Wally Eaton (bass, vocals), James Cobb (guitar), and Joe Wilson (keyboards). His arrival, along with the changing times, also signaled a change in the group's name -- as there was no "Leroy" anyway, that could go, and the Moments was already taken, so, taking their lead from Yost's Classic-model drum kit, they became the Classics. MORE:
Classics IV - Atmospherics 1966-1975,
A Complete Career Collection (2002)
Raven's Atmospherics 1966-1975: A Complete Career Collection has as much music as a fan of the Atlanta-based blue-eyed soul/AM pop collective could want. At 29 tracks, it has just two more than Taragon's Best of Dennis Yost & the Classics IV, but anybody looking for anything other than "Traces," "Stormy," and "Spooky" would be satisfied with either. Fans looking for a more succinct compilation should check out EMI's reissue of the streamlined Very Best of Classics IV. 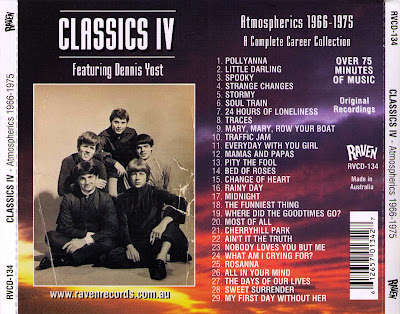