The Overlanders - Michelle (The Pye Anthology) ... PLUS 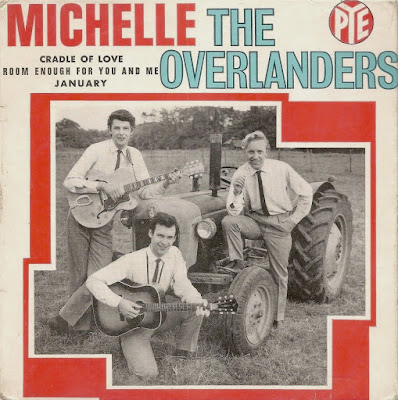 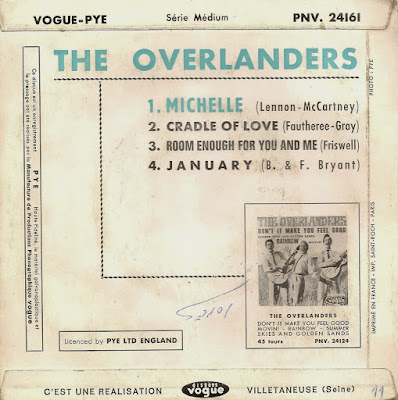 The Overlanders were a highly underrated group whose history took them from the prime years of the British Invasion into the Summer of Love -- their one U.K. hit -- a chart-topping British single of the Lennon-McCartney song "Michelle" -- usually gets them pegged as a cover band, while their origins as a folk group specializing in harmony vocals often gets them lumped in with Silkie, the Ivy League, and other vocal ensembles. And their being put into Castle Records' sunshine pop series Ripples also gives the group a slightly lighter-weight veneer than they deserve. Their actual sound was a beautifully wrought synthesis of folk-inspired vocals and Merseybeat-style harmonies, rhythms, and instrumentation -- they were comparable, in some ways, to the Searchers, with whom (not coincidentally) they shared the same producer, Tony Hatch. They started out as part of the early-'60s British folk boom, initially as a trio made up of Paul Arnold on piano and guitar, Lori Mason on piano and harmonica, and Peter Bartholomew on guitar, all three sang. Their sound was somewhere between the Easy Riders and the Kingston Trio, drawing mostly on an American repertory, including parts of the latter group's song list, along with the compositions of Woody Guthrie, among others, and originals authored by the trio themselves. Their singing, however, had a bold edge that, combined with their exquisite harmonies, lent the resulting music a raw power that most rivals on the college folk circuit utterly lacked.

They were signed to Pye in early 1963 and, with Tony Hatch producing, debuted with a single that July: "Summer Skies and Golden Sands" b/w "Call of the Wild." Both sides of the single were powerful songs within a folk revival idiom that could have made the jump to the rock & roll audience, with crisp rhythm playing and forceful lead guitar (for folk-styled recordings) on their respective breaks; the lead guitar on "Summer Skies and Golden Sands" was simultaneously reminiscent of early-'60s teen pop, and the work of such Joe Meek-produced bands as the Tornados and the Outlaws. From the very beginning, the Overlanders' sides were as much a step toward the development of folk-rock in the U.K. as the music of the Searchers.

They followed their debut up three months later with the even more beat-oriented "Movin'" b/w "Rainbow": the A-side had crisper rhythm and lead guitar parts (the latter very angular and catchy in its off-kilter way) and Merseybeat-style harmonies; the B-side had a flashy, rippling lead guitar part. Additionally, those early sides were all originals by the three members, of whom Arnold (writing as Paul Friswell) proved the most prolific. It was their third single, and the first to be based on an outside composition: that was the charm, albeit a peculiar one -- their cover of Chad & Jeremy's "Yesterday's Gone," with its Beatlesesque harmonies, was a minor hit in the United States, appearing at just the right moment when all things British could get airplay and sales in America. Their record rose to Number 75. It was hardly a smash, but its' charting was enough to give the group a tiny place in the British Invasion tally books.

That was to be the group's sole success in America, and their last chart action anywhere for more than a year. The group released six more singles, including the catchy and eminently danceable "Don't It Make You Feel Good," (their update of the Nancy Whiskey/Chas McDevitt hit "Freight Train"), and their original, "Room Enough for You and Me." Their work engendered positive critical responses without the sales to match. Amid these pop efforts, their B-sides kept the group within the folk idiom, utilizing lighter textures and richer, traditional folk-based melodies. It was around this time, in 1965, that they also toughened up their sound, adding Terry Widlake on bass and David Walsh on drums -- they were now fully a beat group, which positioned them for their eventual breakthrough. The group was rescued in late 1965 following the release of the Beatles' Rubber Soul album. Rival acts had always cherry-picked the best album tracks from the Liverpool quartet, but Rubber Soul was to yield a bumper crop of notable and hit covers by other bands: the Tremeloes' rendition of "Good Day Sunshine," the Hollies' cover of "If I Needed Someone," Truth's recording of "Girl," and the Settlers' version of "Nowhere Man." And right in there, briefly rivaling the Tremeloes' record, were the Overlanders, with "Michelle," which bumped the Spencer Davis Group's "Keep on Runnin'" from the Number One spot on the British charts, and rode the top spot for three weeks.

Their version of "Michelle" was similar to the Beatles' rendition, but with a moodier vocal performance with more prominence to the beat. The B-side, "Cradle of Love," a ballad built on nursery rhymes, had a hauntingly beautiful melody and exquisite harmonies, as well as a bluesy guitar break that made it well worth a listen. Alas, they were never able to follow "Michelle" up with a successful LP, an American release of remotely comparable popularity, or another British hit. They still made very good records, but the public wasn't buying them later in 1966, and by 1967, with the psychedelic era supplanting the beat boom, the Overlanders seemed increasingly out-of-date -- they tried covering "Go Where You Wanna Go" (very nicely, actually) to no avail, and even turned back to their folk roots with singles such as "Circle Lines Blues" (a London take on the Kingston Trio's "MTA"), then veered back to pop/rock with "Love Is Strange." Paul Arnold left the group to pursue a solo career and was replaced by Ian Griffiths on vocals and guitar, but the Overlanders' fate was sealed with the advent of the Summer of Love. The record company didn't help matters any when, in mid-1967, they had the group record an LP jointly with their Pye Records stablemates the Settlers, in which they returned to their roots, doing versions of "Pick a Baile of Cotton," "Goodnight Irene" and other folk and folk-related songs. By October of 1967, they were history -- Widlake, in conjunction with fellow late-era Overlanders' member Vic Lythgoe, cut a pair of singles for Deram Records as part of the Cuppa T, and Widlake was later a key member of Roy Orbison's backing band. Another alum, Paul Brett, became a member of Tintern Abbey, whose Deram single, "Beeside" b/w "Vacuum Cleaner," earned them a permanent place in the psychedelic/freakbeat firmament. Meanwhile, Paul Arnold's solo career never took off, and he later formed a reconstituted folk group, the New Overlanders, who found a performing niche in '70s folk audiences. In 2001, 34 years after they broke up, Castle Records issued a CD assembling the Overlanders' complete released recordings, entitled Michelle: The Pye Anthology. 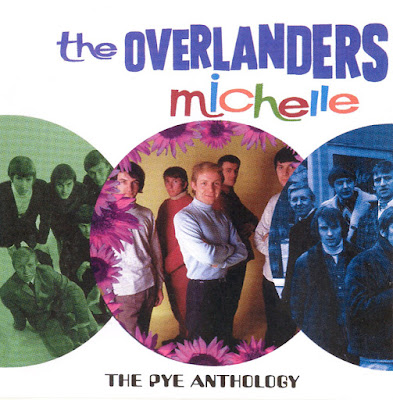 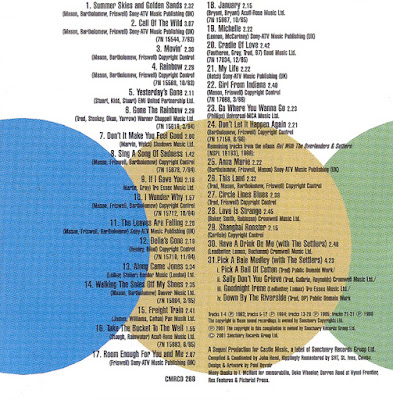