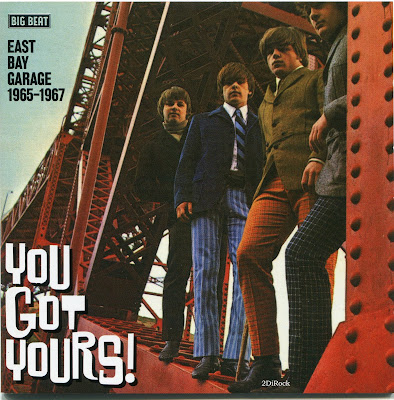 In the mid-'60s, Los Angeles was home to tough garage rock that rattled the city's teen clubs, while San Francisco acts tended to lean more towards the folk-rock and blues that would evolve into psychedelia. The bands that called Northern California's East Bay home seemed to be stuck somewhere in the middle -- tougher than the acts in the city Tony Bennett made famous, but no match for the L.A. bands. The East Bay had a thriving garage rock scene in the days before acid changed the game, and You Got Yours! East Bay Garage 1965-1967 features 24 songs from some of the scene's best acts. Most of these tunes hardly represent teen angst at its most thunderous, but there's a surprising degree of professionalism on display, and the best acts here -- the Baytovens, the Harbinger Complex, Peter Wheat & the Breadmen, and the Spyders -- display chops far beyond what one would expect from teen bands. There are a few doses of full-bore fuzztone on this set (most notably from the Just Six and Blue Lite Conspiracy), and the Soul Vendors and the Epics aren't afraid to show off the right teenage attitude. Fans of goofiness in rock will want to cue up "Dynosuar" by the Flintrocks and "Who Stole the Batmobile" by the Gotham City Crime Fighters (the latter group used to perform in bootleg Caped Crusader outfits, and featured future Tower of Power horn man Emilio Castillo on sax and keyboards), and the Shillings certainly get a prize for Best British Invasion Influenced Name, even if their music isn't quite so remarkable. If none of the bands on You Got Yours! rival the thunder of the Remains or the Sonics, this disc documents a lively garage scene that produced some top-caliber bands, and it's well worth a spin; points added for Alec Palao's excellent and informative liner notes. 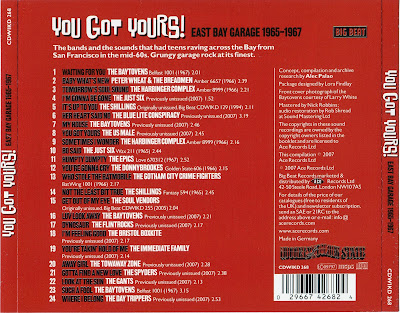