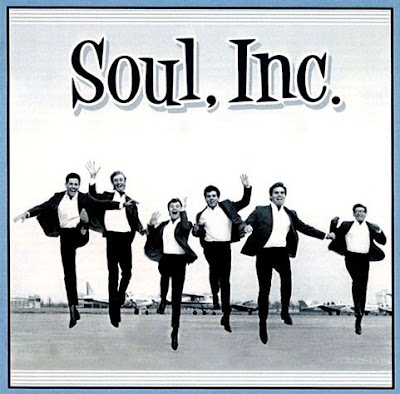 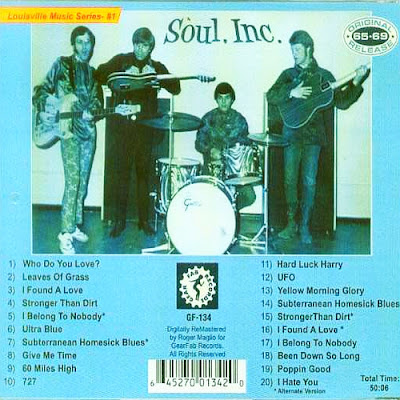 Louisville, Kentucky garage rock band active in the mid- to late-1960s whose name was coined by bassist/vocalist Jimmie Orten. Their first single, "Don't You Go", appeared in 1965. In 1968, several members formed the short-lived splinter group Elysian Field while original guitarist Wayne Young kept the band's name onstage with a cast of new members.
”The Louisville, Kentucky band which released 7 great 45s between 1966-1969 which just ring out with great fuzz guitar, Hammond Organ, Mellotrons, and hard-driving vocals. 20 tracks including unreleased material and a great Psychedelic sampler track from their later incarnation The Elysian Field. They take a tour named ”Caravan of stars tour” with The Byrds, We Five, Paul Revere & The Raiders and Bo Diddley.”
”Soul. Inc, although displaying a magnitude of soul influences, diverged into practically every other mid-60s genre. Their name was not entirely apt! The 20 featured tracks trace the Louisville band’s musical journey from 1965 until ’69 via a number of 45s released on local labels, alternate takes and previously unreleased songs. “Stronger Than Dirt” (later covered by fellow garage bands the Daybreakers and Us Four) is a fuzz laden tune, with a soul tinged verse, a wild solo, pounding drums and a comical lyric, apparently inspired by an Ajax advert from the TV. Danceable 60s garage punk just doesn’t come any better! A few months later when the Byrds startled every young band with “Eight Miles High” Soul Inc’s reaction was to write “60 Miles High” on which they nearly managed to achieve the psychedelic zest of the Byrds. “UFO” which is so influenced by Dylan that it might as well be fellow imitators Mouse & The Traps, is another excellent example of garage band parody. The magnificent moog segment is uncannily like the whacky sounds on the Osmond’s hit “Crazy Horses”. Soul Inc an influence on the Osmonds? Maybe! Finally, the later proto-punk number “I Hate You” blends hard rock fret abuse with nihilistic singing. By the end of the decade the soul influence had completely gone.”