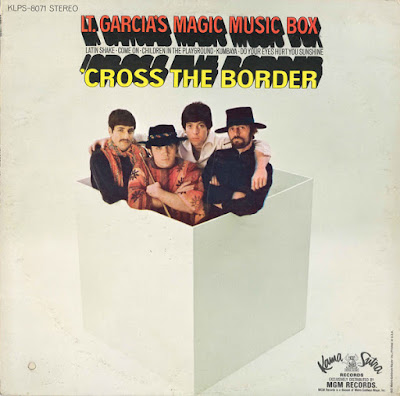 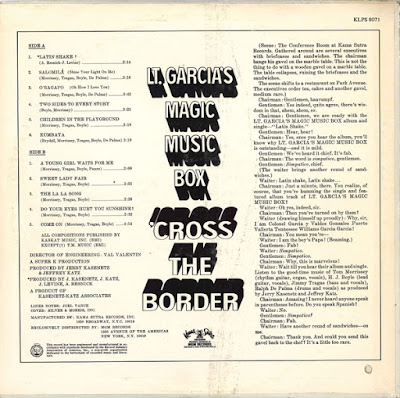 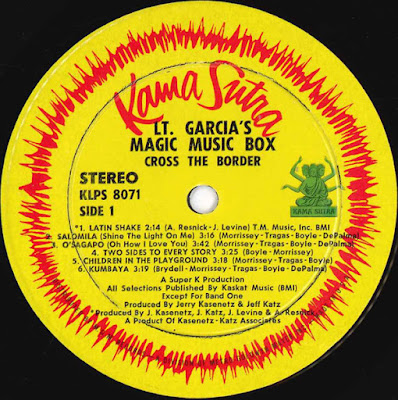 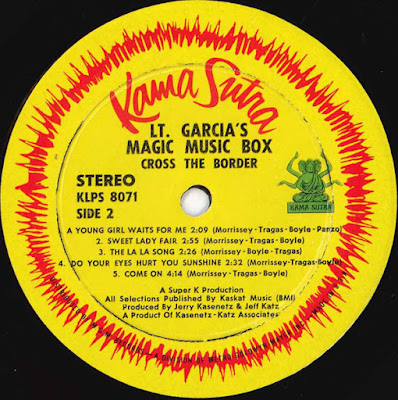 Harry Boyle - real name: Harry J. Boyle
Profile: American songwriter, guitarist and singer.
Began his career in 1959 in the doo-wop group The Laurels (5).
After The Laurels disbanded, members Tommy Duffy, Harry Boyle and Tommy Morrissey formed The
Echoes (US male vocal group who released several singles on Seg-Way Records and Smash Records  in the early 1960s) whose single "Baby Blue" reached the top ten on Billboard in 1961. Boyle and Morrissey would go on to collaborate in several groups and frequently co-wrote songs during the following years. Boyle went on to sign with Cashwest Productions, Inc. in the early 70s and played on Jim Croce's hit album "You Don't Mess Around With Jim".

Lt. Garcia's Magic Music Box - Kasenetz-Katz production, for fans of bubblegum pop psych. Lt. Garcia's Magic Music Box were actually a bit different than most Kasenetz-Katz acts. In their album "'Cross The Border" most of the songs was self-penned. The album also contains a version of the 1953 Greek song "Opou Giorgos kai Malama" (Giorgos Mitsakis), titled here "O 'Sagapo (Oh How I Love You)". The bass player Jimmy Tragas was responsible for that. In spite of the name and occasional Hispanic touches (the nifty single "Latin Shake"), material such as "Two Sides To Every Story", "Sweet Lady Fair" and "The La La Song" consisted of likeable pop-rock. Elsewhere, "O'Sagapo (Oh How I Love You)" and "Do Your Eyes Hurt You Sunshine?" actually reflected a Greek influence. It wasn't about to change anyone's life, but made for a fun half hour. A commercial non-entity,the album and band quickly vanished without a trace.

Peter Marston wrote:
I must admit that when I first came across a copy of Lt. Garcia’s Magic Music Box’s LP ’Cross the Border, I had no idea of the album’s pedigree. I just thought the band’s name was just such a cool knockoff of Sgt. Pepper’s Lonely Hearts Club Band. When I put the stylus to the vinyl, however, it was clear this was not a Mexican psychedelic pastiche, but rather a fine example of late ’60s bubblegum. A check of the production credits revealed the culprits: “Produced by Kasenatz-Katz.” The album as a whole is, in fact, significantly better than much of the Kasenatz-Katz catalog. There may not be a killer single like “Simon Says” or “Gimme Gimme Good Lovin’,” but there are also no filler tracks. The album is a great listen from beginning to end, combining bubblegum, pop, folk and Latin influences.
Unlike many of the bands in the Kasenatz-Katz roster, Lt. Garcia’s Magic Music Box was not a purely studio creation. Indeed, the band had been together since 1960—known at that time as the Echoes. In 1961, the Echoes recorded a teen ballad for Top Rank International called “Baby Blue,” a song that curiously misspells out the title, “B-B-A-B-Y B-B-L-U-E.” Nonetheless, the song was a top ten hit. By 1965, the Echoes were playing more straight ahead rock material and changed their name to the Scoundrels. A few singles were recorded, but none charted. A couple years later, negotiations began with Kasenatz-Katz, who already had the name Lt. Garcia’s Magic Music Box along with plans for a Latin-flavored bubblegum act and what they believed to be a potential hit single, “Latin Shake,” written by Artie Resnik and Joey Levine. The Scoundrels took the deal, the name, the song and headed into the studio to record ’Cross the Border.
As noted above, Lt. Garcia’s Magic Music Box played on their Kasenatz-Katz album. The players were H. J. Boyle on lead guitar, Tom Morrisey on rhythm guitar and organ, Jimmy Tragas on bass and Ralph DePalma on drums. All four sang, with Boyle and Tragas taking the bulk of the lead vocals. With the exception of “Latin Shake,” they also wrote all the songs on the album, in various collaborations among the four members.
The album leads off with the presumed hit single, “Latin Shake,” the chewiest of the bubblegum here. The song strikes me as being like Neil Diamond’s “Cherry Cherry,” but with the bass riff turned inside out. The hook is a long “Awwww . . . .” followed by a shouted “Latin Shake.” It’s unbelievably catchy and will have you singing along by the second chorus. “Salomila (Shine Your Light On Me)” is a midtempo number that’s pretty straight AM pop, with a few Latin touches and some candy-themed lyrics. “O’Sagapo (Oh How I Love You)” is a delicate ballad that bears a Greek rather than Latin influence. “Two Sides to Every Story” is another midtempo number, this time recalling a more mellow Beau Brummels, though there is some Latin shouting in the tag. “Children in the Playground” is a shaky psych/garage song that captures the Nuggets sound perfectly. “A Young Girl Waits for Me” is a rollicking country number that sounds like a cross between the Royal Guardsman and the Five Americans. “The La La Song” is bubblegum dumb and features a great hook, but is arranged as a folk-rock song, in a style similar to Trini Lopez. “Come On” closes out the album with a nice psychedelic vibe, not unlike the Lemon Pipers.
“Latin Shake” b/w the non-album track “Mi Amor Es Verdadero” was released as a single but did not chart. Neither did the LP and nothing more was heard from Lt. Garcia’s Magic Music Box. In 1969, the band toured as the Ohio Express and then parted company with Kasenatz-Katz. They changed their name once more, this time to Red Hook, and signed with Cashman-West Productions. No records ensued, but Boyle did go on to play on Cashman and West’s breakthrough album, Jim Croce’s You Don’t Mess Around with Jim.
’Cross the Border has never been reissued on CD or vinyl and is not available in the legit digital domain. Needledrops are easily available on filesharing websites, however, and the original album can often be found on the secondhand market. Fans of Kasenatz-Katz, bubblegum and late-’60s pop should not miss this one!