The Pleazers were an originally Australian-based rhythm & blues musical group that was popular in New Zealand in the mid-1960s.
The band began in Brisbane as the G-Men, before moving to Sydney, changing their name and going professional. In Sydney, they were noticed by Eldred Stebbing of Zodiac Records, who brought them to New Zealand in 1964, where they soon appeared on the Let's Go show. The initial release, "Last Night"/"Poor Girl", did poorly but the followup release, a cover of Them's "Gloria" broke into the national charts. The band eventually released seven singles, one EP and one album, called Definitely Pleazers. The band went through several personnel changes and in March 1965 moved back to Australia, only to break up six months later. 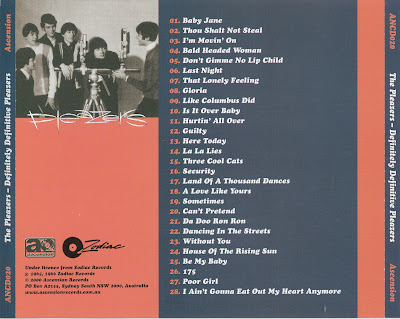 In the mid-'60s, the Pleazers were one of the only New Zealand groups competently playing tough, British Invasion/R&B-styled rock & roll; they were probably only second to the La-De-Da's in their homeland in this regard. They managed to record about half a dozen singles, an LP, and an EP, gaining a few hits in New Zealand and playing some stints in Australia during their brief life. Mixing typical covers of the time with fairly strong original material, the Pleazers were not an extraordinary band; in the United States or Britain, they would have been just another decent regional act. Tough rock bands were still a rarity in New Zealand, though, and so the Pleazers are still remembered there as trailblazers of sorts. Originally an Australian band from Brisbane, known as 'Johnny Gray and The G Men'. They were hired to as a backing band for 'The London Brothers', Billy Bacon and Bob Cooper back in 1964. At that time the band cosisted of, Jimmy Cerezo, lead guitar, Peter Newing, rhythm guitar, Bruce Robinson, bass guitar and me on drums.They were joined by Bob Cooper and decided to change their name to the Pleazers. They then went professional and at this point Vince Lipton decided to leave and was replaced by Bruce Robinson (Bass). The band moved to Sydney, losing Jim Cerezo on the way, so Robinson moved to lead guitar and Ronnie Peel joined on bass.It was while playing in Sydney that they were noticed by Zodiac owner, Eldred Stebbing, who brought them to New Zealand in 1964, with a promise of guaranteed work and unlimited studio time. They started playing at the Shiralee and also appeared on the TV show Let's Go. They looked to be set to take the nation by storm, but fell out with TV producers and were subsequently banned from the airwaves. They started looking scruffier and seemed more comfortable with this image.Their first single, 'Last Night'/'Poor Girl', got minor response. It wasn't until they released their follow-up song, a cover of Them's 'Gloria', with 'That Lonely Feeling' on the reverse, in February 1965, that saw them get any action on the charts. Seven singles, one EP called 'Midnight Rave', and one album called 'Definitely Pleazers' were released on the Zodiac label. The other singles were 'Like Columbus Did', 'Sometimes', 'Is It Over Baby', 'Hurtin' All Over', 'Guilty', 'Can't Pretend', 'Here Today', 'La La Lies' and 'Three Cool Cats', 'Security'.Eldred Stebbing took over the Shiralee in 1966 and renamed it the Galaxie. He installed as resident bands, two of the raunchiest R&B groups around, The La De Da's and the Pleazers. The La De Da's fitted in well with the image of the club, but the Pleazers wanted to continue their rough looking image and Bob Cooper was soon replaced by Shane Hales. Cooper showed up with Hubb Kapp and the Wheels.
Ronnie Peel left the group in 1966 and was replaced by Gus Fenwick from the Layabouts. The Pleazers went back to Australia in June 1966, but returned in March 1967, without Peter Newing, only to split up 6 months later.They were one of the premier groups on the New Zealand scene, but their behaviour was far from acceptable in a staid New Zealand society. Peel spent a brief period with The La De Da's before moving to the UK and a stint with Thunderclap Newman. He later changed his name to Rockwell T James and performed well in Australia. Gus Fenwick also continued his career in Australia, before joining Shane Hales in the Shane Group, which evolved into the Apple. In Australia Gus was a member of the Bootleg Family Band, Healing Force, Nightflyer and Swanee.Shane Hales had a short stint with Jamestown Union, before forming the Shane Group, and after that had a very successful solo career, while Bruce Robinson went on to join Troubled Mind, then Flinders and Rockinghorse.In 1988 Raven released an album that was named and looked the same as the 1966 EP, but contained tracks made up of singles, the EP and album tracks.