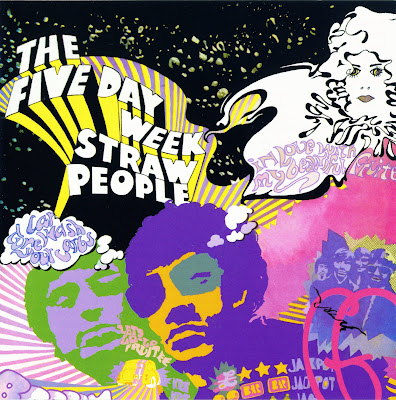 The Five Day Week Straw People were a one-off, studio-only British psychedelic band that did one rare album in late 1967 (released in 1968) for the budget Saga label. Its ten songs were loosely centred around the concept of a typical weekend in the life of typical working British people. For a fee of 25 pounds per musician, the Five Day Week Straw People -- comprised of singer/guitarist John Du Cann (of the obscure psychedelic pop group the Attack, who cut four singles for Decca), bassist Mick Hawksworth, and drummer Jack Collins -- were assembled. The album was recorded in about four hours in a London schoolroom, a remarkable achievement given that Collins had not heard any of the songs prior to the session.
The album has attracted praise among collectors for its charming British period psychedelia. It leans a little more toward heavy rock than toward mod, although there are some strong pop elements in the vocal harmonies and the British storytelling lyricism. Du Cann, Hawksworth, and Collins decided to found Andromeda after cutting The Five Day Week Straw People, although Andromeda was definitely in a heavier, hard rock vein. 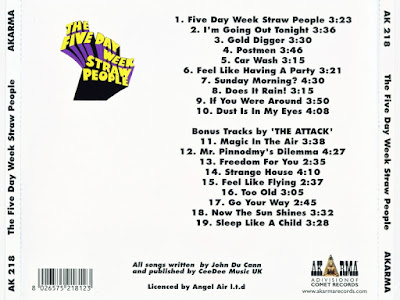 A late-'60s pop group with an overtly commercial, AM radio-directed sound, similar at times to things done by the Turtles or Left Banke, but much chirpier, like a somewhat less bubblegummy variation of the Cuff Links ("Tracy"). Little of their material was self-penned, and their self-titled album isn't even recommended to connoisseurs of this kind of stuff.