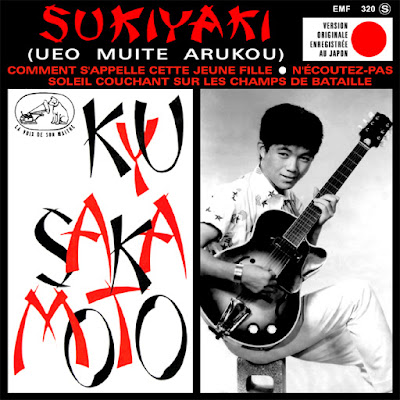 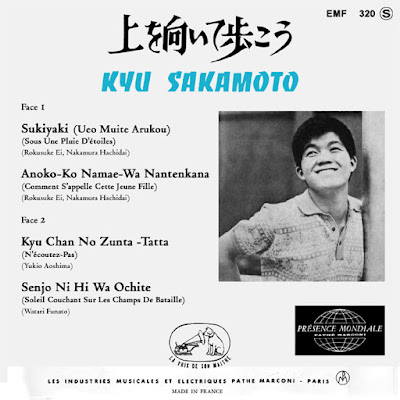 Kyu Sakamoto (坂本 九 Sakamoto Kyū, born Hisashi Sakamoto (坂本 九 Sakamoto Hisashi), raised as Hisashi Ōshima (大島 九 Ōshima Hisashi), 10 December 1941 – 12 August 1985) was a Japanese singer and actor, best known outside Japan for his international hit song "Ue o Muite Arukō" (known as "Sukiyaki" in English-speaking markets), which was sung in Japanese and sold over 13 million copies. It reached number one in the United States Billboard Hot 100 in June 1963, making Sakamoto the first Asian recording artist to have a number one song on the chart. Sakamoto, along with 519 other passengers on the flight, was killed in the crash of Japan Airlines Flight 123 on 12 August 1985; the deadliest single-aircraft accident to date.
Sakamoto was born on 10 December 1941, in Kawasaki, Kanagawa Prefecture, to Hiroshi Sakamoto, a cargo tender officer, and his second wife, Iku. He was the youngest of his father's nine children, which is why he was nicknamed Kyū-chan (九ちゃん Kyū-chan), meaning "lil nine". Kyū is also an alternate reading of the kanji of his given name, Hisashi (九).

In the summer of 1944, during the air raids over the greater Tokyo area, Kyu's mother took her three children to live with their maternal grandparents in rural Kasama, Ibaraki Prefecture. They moved back to Kawasaki in 1949. Their father's company had been closed by the American occupation forces and he opened a restaurant.
In 1956, Kyu's parents divorced. His mother was given custody over her three minor children including Kyu, and they adopted the mother's maiden name, Ōshima. His older step-siblings kept their father's surname, Sakamoto. Kyu started playing guitar in high school, but he soon began singing.
In May 1958, when Sakamoto was 16 years old, he joined the Japanese pop-band The Drifters that had been formed three years earlier. Sakamoto was unhappy about his position in the band as second vocalist, and this often led to fights with the other members. His big breakthrough as a band member came 26 August 1958, when he sang at the annual music festival Western Carnival at the Nichigeki Hall. After a quarrel that ended in a fight with two of the other members, Sakamoto left the band in November 1958.

For a short period of time, Sakamoto returned to his studies and focused on entering the university. By December 1958, he joined his classmate's Hisahiko Iida's band called Danny Iida and Paradise King. He replaced Hiroshi Mizuhara as singer. Sakamoto's career began to rise to expectations, where he ended his studies and left school. In June 1959, the band got a record deal at the JVC record company. The Paradise King and Sakamoto released their song "Kanashiki Rokujissai" in August 1960, which became a great hit. In the time after they released a number of songs that became very popular. This led to Sakamoto obtaining a record deal at the Toshiba Records company and left the Paradise King aiming at a solo career.
Sakamoto's solo career was inaugurated with the love song "Ue o Muite Arukō" written by Rokusuke Ei and Hachidai Nakamura. The song was first heard on the NHK entertainment program Yume de Aimashō on 16 August 1961. It became a smash hit and was released on red vinyl on October 15. It remained the highest selling record until January 1962, three months after its release.

His international breakthrough came in 1963 during a visit to Japan by Louis Benjamin, an executive of British record company Pye Records. Hearing the song several times, Benjamin decided to bring it back to England. Due to concerns that the title would be too hard for English-speakers to pronounce or remember, the song was renamed "Sukiyaki", after the Japanese cooked beef dish familiar to the English. The new title was intended to sound both catchy and distinctive in Japanese, but other than the language, it had no actual connection to the song.

Initially, Pye Records released an instrumental version of the song recorded by Kenny Ball and His Jazzmen. After that became a hit in England, His Master's Voice (HMV) released the original, which also sold well, reaching sixth place in HMV's most sold records. In 1963, Capitol Records released the song in the USA with the alternate title, eventually selling over one million copies, and remaining number one on the Billboard Hot 100 number one single for three weeks in June, 1963.

After the international success of "Sukiyaki", Sakamoto went on a world tour that lasted from summer of 1963 to the beginning of 1964. Among the countries he visited were the United States (including Hawaii), Germany, and Sweden. During his time in the U.S., he was invited to appear in several television shows. On 13 August 1963, he landed at Los Angeles International Airport and that evening, was a guest of television program The Steve Allen Show. Sakamoto was also expected to appear on The Ed Sullivan Show, but his appearance was canceled owing to a scheduling conflict with the production of his upcoming movie, Kyu-chan Katana o Nuite.

He received his sole foreign Gold Record of the Recording Industry Association of America (RIAA) by Capitol Records on 15 May 1964 in Hotel Okura, Tokyo.

Later appearances
During the 1964 Summer Olympics, he was featured on the Swedish TV-program Hylands hörna broadcast live from Tokyo.

Death
On August 12, 1985, Sakamoto was aboard Japan Airlines Flight 123, on which he was heading to Osaka for an event. The plane crashed into two ridges of Mount Takamagahara in Ueno, Gunma which became the deadliest single-aircraft accident in history. A total of 520 people were killed in the crash, including Sakamoto.

His body is interred at Chōkoku-ji Temple in Minato, Tokyo.

Legacy
His most popular song, "Ue o Muite Arukō" ("I look up when I walk") remains the only Japanese song to reach number one on the Billboard pop charts in the United States, a position it maintained for three weeks in 1963. It was also the first ever Japanese language song to enter the UK charts, though it only climbed to number 6 with no further chart entries.

"Sukiyaki" has been covered multiple times over the years, beginning with the instrumental by Kenny Ball and his Jazzmen. "Sukiyaki" was also covered as an instrumental, by English pianist Johnny Pearson, during 1982. Well-known English-language cover versions include a 1981 cover by A Taste of Honey and a 1995 cover by 4 P.M., both of which made the top ten of the Billboard Hot 100. In 1989, Selena's self-titled album contained a Spanish translation of the Taste of Honey cover which was released as a single in 1990. The English lyrics have also appeared in whole or in part in songs by performers including Slick Rick and Doug E. Fresh (1985's "La Di Da Di"), Salt-N-Pepa (1985's "The Show Stopper"), Snoop Dogg (1993's "Lodi Dodi", a "La Di Da Di" cover), Bone Thugs-n-Harmony (1995's Bless Da 40 Oz.), Raphael Saadiq (1995's Ask of You, another to make the Hot 100), Mary J. Blige (1997's "Everything") and Will Smith (1999's "So Fresh", featuring Slick Rick).

An American version by Jewel Akens with different American lyrics was written for it. Titled "My First Lonely Night (Sukiyaki)" in 1966, the song reached number 82 on the Billboard Hot 100.

On 16 March 1999, Japan Post issued a stamp commemorating Sakamoto and "Sukiyaki". The stamp is listed in the Scott Standard Postage Stamp Catalogue as Japan number 2666 with a face value of 50 yen.

"Ue o Muite Arukō" was featured in the soundtrack of the 2011 Studio Ghibli film From Up on Poppy Hill. In one scene, an animated Sakamoto is seen performing the song on the television.

An instrumental version of "Ue o Muite Arukō" was used in episode 2 of the Amazon series The Man in the High Castle, a reimagining of life in the United States had the United States lost World War II. In the series, set in 1963, the year the song debuted, Japan is given control over the West Coast, and "Ue o Muite Arukō" can be heard playing in a bar.

"Sukiyaki" was also featured in season 2, episode 2 of the television show Mad Men, a period drama television series about the lives of advertisers in New York in the 1960s.
Enjoy.