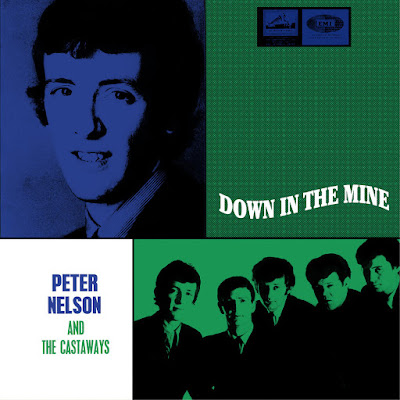 There are many bands called The Castaways - from the USA and the UK, etc. In the catalog of 45cat singles there are 20 of them ... Here is a rare & good band from New Zealand.

Peter Nelson and the Castaways originated from Christchurch. Peter's real name was Peter Trebilcock. They appeared on the local TV show "Teen Scene" there before basing themselves in Wellington. With this original line-up they recorded two singles "Baby Can I Take You Home"/"I'll Never Be Blue" and "Down The Road Apiece"/"I'll Go Crazy" in 1965. They were good examples of R&B from that time. Unlike other New Zealand bands of the era the Castaways chose to mine a rich vein of obscure tracks of R&B and mixed them with their own originals.

It was the next single that they were best known for. It was "Down In The Mine"/"So Don't Go". "Down In The Mine" was written by Peter Hindmarsh, who was the bass player for the Wellington band, the Premiers, in the early sixties. Around this time Doug Rowe, from Palmerston North's Saints, replaced Don Clarkson on bass in 1965.

One more single was released, "Goin' Out Of My Mind"/"Skye Boat Song", before the group left for Australia in 1966. Following the groups arrival in Australia, Peter Nelson left them to find fame as a solo artist, heading to the lucrative scene in Hong Kong. Peter was replaced by a new vocalist called Frankie Stevens, brother of Jon Stevens and they changed their name to the Castaways.

Frankie Stevens was born Francis Donald McKechnie Stevenson in Wellington, New Zealand in 1950. His mother was Maori, and his father Scottish. He has 10 brothers and sisters. One of his younger brothers is Jon Stevens, who has also had a very successful career in his own right.

Frankie knew from an early age that singing was going to be his career, commencing when he sang with the school band in Upper Hutt at the age of thirteen. This was in 1962 when Wayne Mason formed his first band with classmates from Heretaunga College. Calling themselves the Southern Auroras, they consisted of Frank Stevenson, as he called himself then, on vocals, Martin Hope on lead guitar, Les Gruebner on bass, Jim McEwan on drums, and Wayne Mason on rhythm guitar. As a group they never really got going, but it was a sufficient experience to learn their musical basics. This group was the embryo band for Wayne Mason and he evolved it over the years into what would later become the Fourmyula.

Frankie's professional career began at the age of 16 when he moved to Sydney, Australia in 1966. At the same time as Frankie went to Australia, another New Zealand group was doing the same. They were Peter Nelson and the Castaways and following the groups arrival in Australia, Peter Nelson left them to find fame as a solo artist. Peter was replaced by new vocalist Frankie Stevens, and they changed their name to the Castaways.

As the Castaways they released the singles "Any Little Bit"/"Early Morning" in 1967 and "One More Fool"/"Baby What I Mean" and "Angelica"/"Love Is A Hurtin' Thing"  for EMI in Australia before returning to New Zealand in 1968. After a couple of years of touring Australia and New Zealand, he left the group to try his luck as a solo artist.

There were still two singles to be released as Peter Nelson and the Castaways. They were "Knock On Wood"/"Old Man Mose" and "At A Time Like This"/"A Little Lovin' Somethin' ", both released in 1967. As the Castaways they released the singles "Any Little Bit"/"Early Morning" in 1967 and "One More Fool"/"Baby What I Mean" and "Angelica"/"Love Is A Hurtin' Thing"  for EMI in Australia before returning to New Zealand in 1968. During their time in Australia, Len Ormsby was replaced by Reno Tehei, Doug Petrie by ex-Twilights drummer Laurie Pryor, and Peter Gillette by Lance Dixon.

Down In The Mine 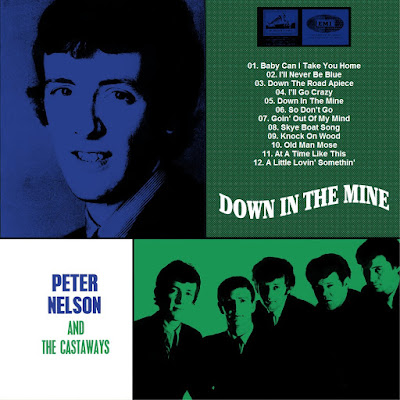