The Peppermint Rainbow - Will You Be Staying After Sunday 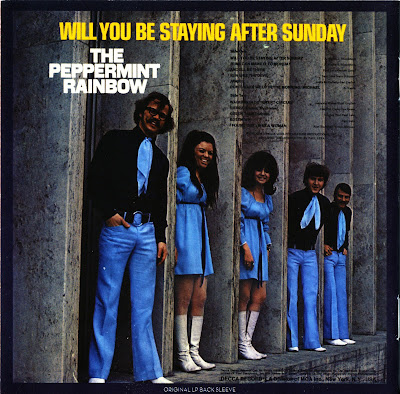 Baltimore's Peppermint Rainbow had a Top 40 hit in 1969 with their harmony-laden soft rocker "Will You Be Staying After Sunday" -- a nod (both thematically and musically) to the Spanky & Our Gang hits "Sunday Morning" and "Sunday Will Never Be the Same." Like Spanky & Our Gang, the Peppermint Rainbow excelled at soaring vocal harmony work, with Bonnie Lamdin (later Phipps) helming most of the leads and the rest of the group providing the backing. A real working road band, the Peppermint Rainbow slugged it out in the clubs of Baltimore and Georgetown (under the name the New York Times) in 1967-1968, and got their first break when they caught the attention of Cass Elliot (Mama Cass, duly impressed and probably flattered, joined the group on-stage during a Mamas & the Papas medley and quickly hooked the group up with her contacts at Decca Records).

"Green Tambourine" writer/producer Paul Lenka took the band under his wing and released its first single, "Walking in Different Circles" b/w "Pink Lemonade," under the group's new moniker the Peppermint Rainbow. The record failed to chart but their next single, the Al Kasha-penned "Will You Be Staying After Sunday," was a hit. Overnight, the bandmembers went from sharing bologna sandwiches to playing alongside acts like the 5th Dimension and Sly & the Family Stone, as well as appearing on numerous television shows. Subsequent singles charted admirably, but their only LP release (titled Will You Be Staying After Sunday) never cracked the Billboard Top 100. By 1970, the group had dissolved -- a combination of disenchantment with the industry and personal commitments -- leaving three fine singles and one great long-player as testimony to "flash in the pan" fame.

Peppermint Rainbow got their big break when Cass Elliot of the Mamas & the Papas caught their act at a club in Georgetown, VA, and was impressed enough to help them land a record contract and a management deal. The happy irony is that on their first and only album, Will You Be Staying After Sunday, the Peppermint Rainbow sound much less like the Mamas & the Papas than their rivals on the charts Spanky & Our Gang, right down to their fondness for songs about the first day of the week, and singer Bonnie Lamdin was a dead ringer for Elaine "Spanky" McFarlane. Paul Leka, the producer responsible for the Lemon Pipers' "Green Tambourine," was the man behind the controls for the Peppermint Rainbow's recordings, and his talent for top-shelf sunshine pop with just a hint of psychedelia is very much in evidence here; the group's two hit singles, "Will You Be Staying After Sunday" and "Don't Wake Me Up in the Morning, Michael," boast splendid harmonies and rich, dynamic arrangements that buoy the arrangements with strings, horns, and well-punctuated drumming. Those two songs are the best things on the album, but the rest of the tracks are more than just filler (except for a curious cover of "Green Tambourine" in which Leka appears to have recycled the backing track from the Lemon Pipers' original version). "Pink Lemonade" was the group's first single and should have enjoyed the same success as its siblings, the French-accented "Jamais" has a string arrangement the Left Banke would have been proud of, "Rosemary" features a curious "Asian"-flavored arrangement that melds well with the harmonies, and "Sierra (Chasin' My Dream)" is a welcome detour into folk-rock. Will You Be Staying After Sunday is a pleasant surprise, a solid and thoroughly enjoyable album from an all but forgotten band, and it suggests the Peppermint Rainbow might have had a few more hits in them if they'd lasted long enough to cut a second LP. 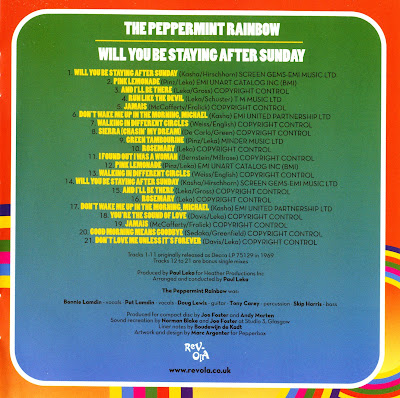