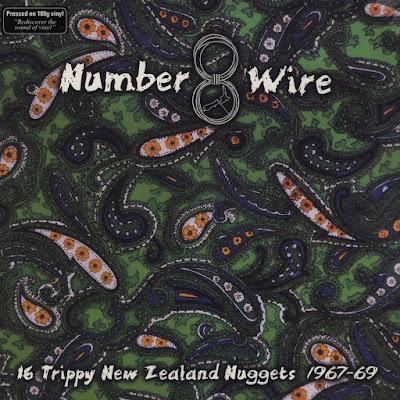 Review by Fred Thomas
In 1967 the United States ushered in the hippie revolution with the Summer of Love and an unprecedented shift in youth culture as thousands of young adults started tuning in, dropping acid, and questioning authority like never before. San Francisco's psychedelic scene was blooming while Hendrix and the Beatles were embarking on their most tripped-out experimentation yet. The shift in the U.S. was impossible to ignore, but the cultural ripples were felt worldwide. Number 8 Wire collects 16 of the most bizarrely psychedelic artifacts of the 1967-1969 era by obscure New Zealand garage bands, most of which were barely even known past their hometowns, let alone stateside. The 16 acts here were just a fraction of the avalanche of new bands that sprouted up worldwide during the late '60s, and like a lot of forgotten sounds from the early days of psychedelia, these low-budget productions are endlessly interesting, fantastical, and more sonically exploratory than much of what rose to mass popularity in their time. Decades before Flying Nun Records and the New Zealand post-punk sound came into being, the songs on Number 8 Wire are informed by the splintered psych sub-sects of a post-Sgt. Pepper's world more than they're based in any regional flavor. That said, there's some subtle approaches to melody that align many of the songs here. The Top Shelf's soaring chorus on "Time Beyond" has some slight similarities to the nervous "Tropic of Capricorn" by the Hi-Revving Tongues or the arpeggiating organ melodies of the Group's "People in the Night."

Subtleties are spare on the compilation, however. The collection aims to assemble some of the most over the top slices of psychedelic freakout, heavy on wild-eyed drugginess and giddy exuberance for a hippie movement that was brand-new at the time. Along with tracks doused in sitar, wah-wah guitar, tripped-out Byrds and Hendrix-style production twists, and sound effects are some laughably dated tunes loaded with jargon and signifiers of the time. Lew Pryme offers up the ridiculously heavy-handed "Gracious Lady Alice Dee" (Get it? Get it?) while the House of Nimrod sing the praises of the communal lifestyle on "Slightly-delic." The camp factor can get pretty out of control at moments, which is kind of the point. It's all in good fun, but can offer a somewhat limited view of the New Zealand scene at this time. "Water Pipe," a dippy drone by the Avengers, is a perfectly warped inclusion for this collection, but easily the weakest track on Electric Recording, the incredible Zombies-esque sunshine pop album from which it's taken. The Dave Miller Set contribute the somber and strangely recorded "Mr. Guy Fawkes," predicting some of the lo-fi energy of a New Zealand to come. One-off novelties abound on Number 8 Wire, but past the flowers and love beads are some genuinely incredible sounds and a few bands definitely worth investigating further than their most acid-washed moments represented here. 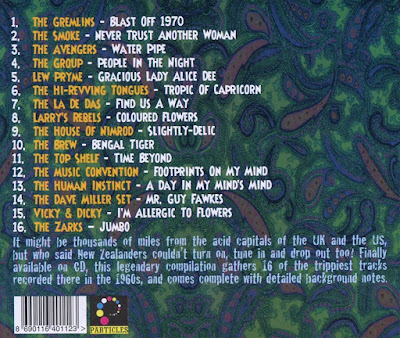