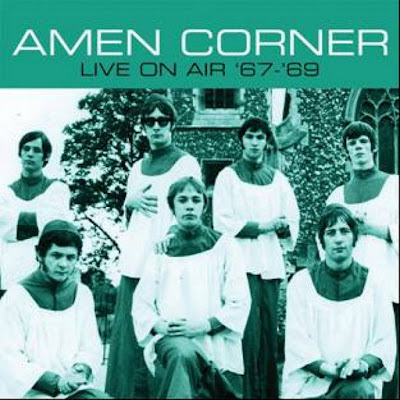 Amen Corner, live in session, in London from 1967 – 1969.
Between the package tours and recording commitments for Decca and later, Immediate, The Amen Corner would be regular visitors to the Paris Theatre and Aeolian Hall in London, homes to the BBC and their suitably equipped recording facility. These sessions once again highlight the band’s own preferences for cover material that would reflect their own tastes and thus offer a more genuine insight into the band. Together with revealing interviews with the light programming host (usually Brian Matthew) and a horde of previously unavailable recordings from a halcyon period in British pop music, a valuable light can be shone on an ultimately, hugely influential decade in British pop culture. London Calling proudly presents The Amen Corner live in session from London, 1967-1969. Professionally remastered original broadcast recordings with background liners and period photos.
Track Listing:
1967
September 9th
Sergeant Pepper's Lonely Hearts Club Band
Gin House Blues (with interview)
Knock On Wood
3rd November
In The Pocket
World of Broken Hearts (with interview)
Day Tripper
1968
9th February
I Don't Want to Discuss It
Bend Me Shape Me (with interview)
The Duck
8th March
(Satisnek) The Job's worth
Shake a Tail Feather
2nd August
High In the Sky
So Fine
Baby Do The Philly dog
1969
21st February
(If Paradise Is) Half As Nice
13th June
(If Paradise is) Half as Nice
Proud Mary (with interview)
Things Ain't What They Used to Be
27th June
Hello Suzie
Lady Riga 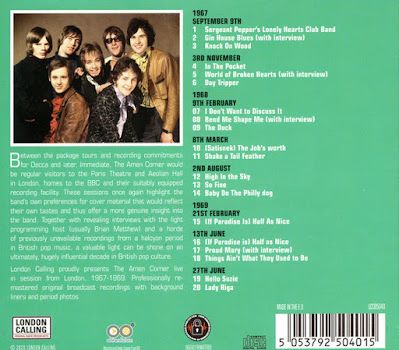