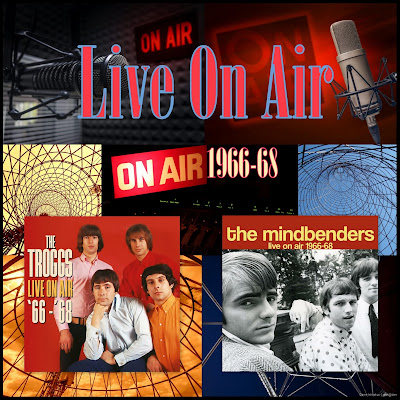 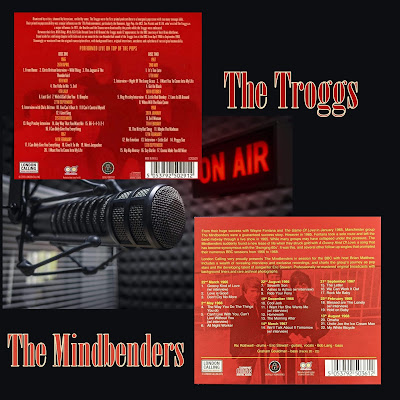 The Troggs - Live On Air 1966 - 68
The Troggs, live on Top of the Pops, 26th April 1966 – 13th September 1968.
Dismissed by critics, shunned by historians, reviled by some, The Troggs were the first primal punk antidote to a bourgeois pop scene with too many teenage idols. Their primitive pop sensibility was a major influence on the '70s Punk movement, particularly the Ramones, Iggy Pop, the MC5, Sex Pistols and R.E.M. who’ve cited The Troggs as a major influence. In 1977, the Beatles and the Stones were dismissed by the punks while the Troggs were embraced. Between their hits Wild Thing, With A Girl Like You and Love Is All Around, the Troggs made 12 appearances for the BBC courtesy of host Brain Matthews. Stand aside for a defining chapter in British rock as we unearth the raw Neanderthal sound of the Troggs live at the BBC from April 1966 to September 1968. Stunningly re-mastered from the original transcription discs, with background liners, original interviews, anecdotes and a plethora of rare original memorabilia.
Track listing:
1966
26th April
From Home
Chris Britton Interview > Wild Thing
The Jaguar & The Thunderbird
9th May
The Yella In Me
Evil
4th July
Lost Girl
With A Girl Like You
Dimples
27th September
Interview with Chris Britton
You Can’t Beat It
I Can’t Control Myself
I Just Sing
21st December
Reg Presley Interview
Any Way That You Want Me
Night Of The Long Grass
I Want You To Come Into My Life
Girl In Black
16th October
Reg Presley Interview
Little Red Donkey
Love Is All Around
When Will The Rain Come
1968
28th January
Evil Woman
7th February
The Kitty Kat Song
Maybe The Madman
12th February
Her Emotion
Interview > Little Girl
Peggy Sue
13th September
Hip Hip Hooray
Say Darlin
Gonna Make You All Mine 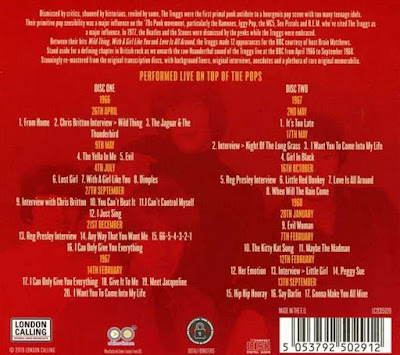 The Mindbenders - Live On Air 1966-68
The Mindbenders, live on air, 22nd March 1966 – 13th August 1968
From their huge success with Wayne Fontana and The Game Of Love in January 1965, Manchester group The Mindbenders were a guaranteed success story. However in 1965, Fontana took a solo route and left the band midway through a live show in 1965. While many groups may have collapsed under the pressure, The Mindbenders suddenly found a new lease of life when they struck gold with A Groovy Kind Of Love, a song that has become synonymous with the ‘Swinging 60s’. It was this, and several other follow-up singles that prompted their numerous BBC sessions from 1966 to 1968.
London Calling very proudly presents The Mindbenders in session for the BBC with host Brian Matthew. Includes a wealth of revealing interviews and exclusive recordings, and charts the group’s journey as pop stars and the developing talent of songwriter Eric Stewart. Professionally re-mastered original broadcasts with background liners and rare archival photographs.
Track Listing
22nd March 1966
Groovy Kind of Love
Love is Good
Don't Cry No More
2nd May 1966
The Way You Do The Things You do
Can't Live With You, Can't Live Without You
All Night Worker
22nd August 1966
Seventh Son
Ashes to Ashes
Ride Your Pony
19th December 1966
Cool Jerk
I Want Her She Wants Me
Homework
The Morning After
14th March 1967
We'll Talk About It Tomorrow
21st September 1967
The Letter
We Can Work It Out
Rock Me Baby
23rd February 1968
Blessed Are The Lonely
Hold on Baby
13th August 1968
Omaha
Uncle Joe the Ice Cream Man
My White Bicycle 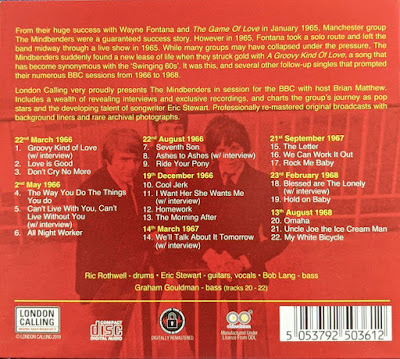