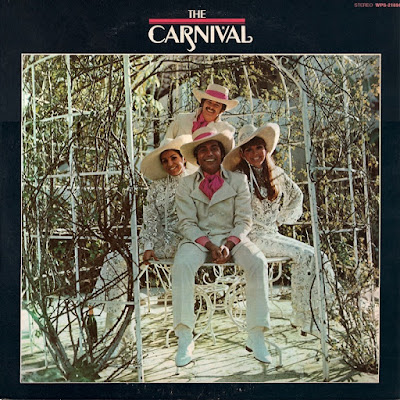 Members:
Janis Hansen, José Soares, Terry Fischer, Tommy Neal
The Carnival was an American pop group formed by percussionist José Soares and vocalist Janis Hansen, both formerly of Sergio Mendes' Brasil '66. Initially a joint venture between Walter Wanderley and the original members of Brasil '66, the group eventually settled into a quartet augmented by Terry Fischer of the Murmaids and bassist Tommy Neal.
The quartet's Brasil '66-meets-5th Dimension sound was largely the brainchild of legendary producer and engineer Bones Howe who gathered L.A.'s finest Wrecking Crew studio musicians like Hal Blaine and Larry Knechtel for the project. 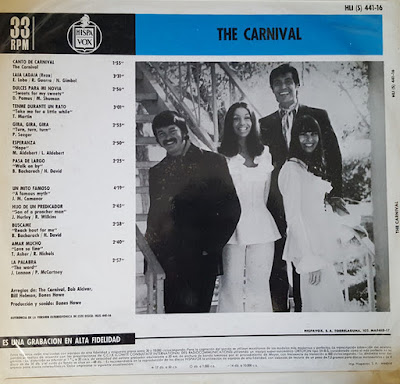 Canto De Carnival
Laia Ladaia
Sweets For My Sweet
Take Me For A Little While
Turn,Turn,Turn (To Everything There Is A Season)
Hope
Walk On By
A Famous Myth
Son Of A Preacher Man
Reach Out For Me
Love So Fine
The Word
The Carnival's self-titled album from 1969 sounds quite a bit like the sunny blend of L.A. sunshine pop and easy Brazilian rhythms that Sergio Mendes & Brasil '66 were dishing out at the time. No big surprise there as the Carnival was made up of Brasil '66 exiles Jose Suares and Janis Hansen. They were joined by Terry Fischer, a member of the Kim Fowley-produced girl group the Murmaids and bassist Tommy Neal. The music was bolstered by the presence of the legendary Wrecking Crew, and the whole deal was overseen by producer Bones Howe. The group covers pop tunes almost exclusively, wrapping "Turn, Turn, Turn," "Walk On By," "Sweets for My Sweet," "Son of a Preacher Man," and the Beatles' "The Word" in their silky embrace, sounding like some of the classiest, most swinging elevator music you'd ever want to hear. The songs that aren't pop hits of the day come off well also; the group-penned "Canto de Carnival" and the very bossa "Laia Ladaia" start the album off with a fizzy kick. It is a bit of a shame the rest of the record didn't continue in this more Brazilian vein. Still, the record is a lot of fun and Janis Hansen has a wonderfully pure and sweet voice that manages to transcend the easy backings and really soar soulfully. Fans of her work with Mendes, and of Mendes and the EZ Brazil sound, should add this record to their collection with no hesitation.
***
Posted by: D&J на 01:25