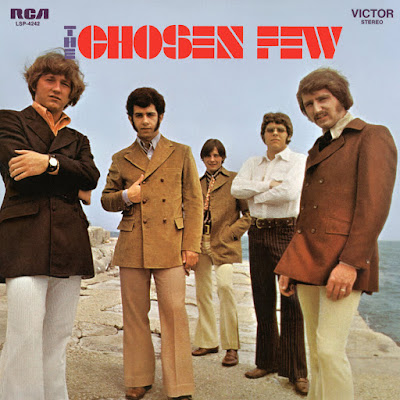 The Chosen Few ‎– The Chosen Few
Originally released 1969 RCA Victor
Mid-1960s band from Muncie, Indiana, USA originally known as The Invincibles, they changed their name to The Chosen Few in early 1967. They released 4 singles on the Denim label and one on Talun before getting signed by RCA in 1969. In the early 1970's they reformed and became Limousine, releasing a self-titled LP on GSF Records before evolving into Faith Band * in 1973....
Jack Hamilton on bass
Rich Burmann on guitar
Steve Baba (also known as Hodgie or Hadji Baba) on vocals
Steve Nephew on drums
John Cascella joined on keyboards in 1966, and the band changed their name to the Chosen Few in early ’67. Baba was their original lead singer, but Steve Nephew and Jack Hamilton also took turns on vocals. Carl Storie joined in late summer or fall of ’67, giving the band two frontmen vocalists and a boost to their stage presence. This combination was together for almost a year. At times Jack switched to piano or harpsichord while Hadji played bass.
Chosen Few Denim 45 It Just Don't Rhyme“It Just Don’t Rhyme”, released in May of ’67 is the first of four 45s they released on the Denim label, and the most rockin’. The guitarist’s snappy rhythm on the intro provides the hook as the singer tells the girl to get her head out of the clouds. Jack Hamilton handled the lead vocals on this song. The band liked it enough to record it a second time with fuller vocal tracks and heavier organ as the a-side of their third single, this time backed with a cover of “Lucille”.
“Don’t Say It” has a different kind of sound, rooted in 50’s r&b, featuring good horn arrangements and a nice bass line. “Don’t Say It” was written by Jack Hamilton, “It Just Don’t Rhyme” had music by Hamilton and words by Steve Nephew.
Chosen Few Denim 45 We Walk TogetherTheir second 45 has the folk-rock sounds of “We Walk Together” (a Jack Hamilton composition) backed with the solid pop number “Foolin’ Around with Me” (co-written by Hamilton and Nephew). Production was by Bill Michael.
Sometime around late 1967 or 1968, Rich Burman and Steve Nephew left the band, and Dave Bennett (guitar) and Dave Barnes (drums) took their place. Hadji Baba left and joined the Ritual as their vocalist. The band’s later work is more pop based, as evidenced by their fourth and last Denim 45, “Pink Clouds and Lemonade”, backed by a cover of the Supremes hit, “Stop! In the Name of Love”.
Chosen Few Denim 45 Foolin' Around With MeAfter leaving Denim, The Chosen Few released a 45 on the Talun label “Maybe the Rain Will Fall” / “Deeper In” which was picked up by RCA. The band signed to RCA for an album deal in 1969. Their self-titled LP continues the pop sound of their later 45s, adding horns to the mix, though some of the band was disappointed in how it turned out.
The Chosen Few evolved into the Faith Band * , who released five LPs in the 70’s. By this time Jack Hamilton had left and was replaced on bass by Mark Cawley, leaving John Cascella as the only member who had been with the original Chosen Few in ’67. John Cascella went on to join John Mellencamp’s group until he passed away in 1992. Carl Storie is still active in music with his own group.
Thanks to Ann Likes and Gary for sending in the great photos of the group. If anyone has more shots of the early group, please get in touch at chas_kit@hotmail.com.
The original entry I wrote has been corrected thanks to information from Jack and Cindy Hamilton and from comments below. Thanks to Jean-Pierre Coumans for the scans of “We Walk Together” and “Foolin’ Around with Me”. The Denim label also released the Jades “Come Back” / “Change My Ways”. ( https://garagehangover.com/2007/08/page/2/ )
https://forums.stevehoffman.tv/threads/the-chosen-few-1960-s-
band-anyone-heard-of-them.348608/
https://en.wikipedia.org/wiki/Faith_Band
01. The Chosen Few-Talk With Me
02. The Chosen Few-You Make Me So Very Happy
03. The Chosen Few-Maybe The Rain Will Fall
04. The Chosen Few-Sea Of Tranquility
05. The Chosen Few-Spend One Night
06. The Chosen Few-Beginnings
07. The Chosen Few-Safrowillie
08. The Chosen Few-I'll Never Change You
09. The Chosen Few-Deeper In
10. The Chosen Few-I Will Miss You 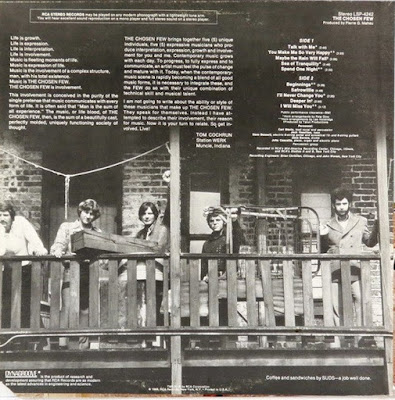 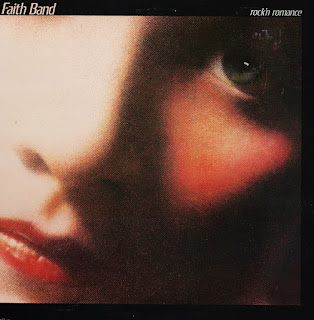