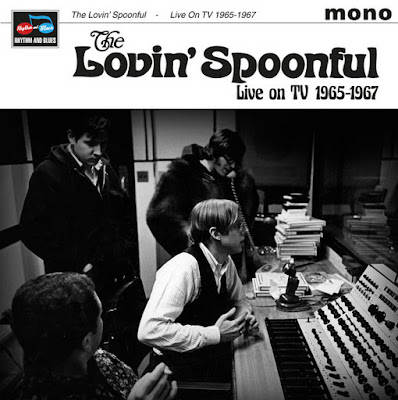 Live On TV 1965-1967 ( from yamusic)
A:
1.Do You Believe In Magic & You Didn't Have To Be So Nice (TNT 29.11.65)
2.On The Road Again (Shivaree 14.8.65)
3.Let the Good Times Roll (Shindig 16.10.65)
4.There She Is (Hullabaloo 7.02.66)
5.Help (Hullabaloo 13.09.65)
6.Do You Believe In Magic & Did You Ever Have To Make Up Your Mind (Shindig 16.10.65)
7.May the Bird of Paradise (Hullabaloo 1.11.65)
8.When the Saints Go Marching In (Shindig 16.10.65)
B:
9.Do You Believe In Magic (Hullabaloo 13.09.65)
10.You Didn't Have To Be So Nice (Hullabaloo 1.11.65)
11.Nashville Cats (Ed Sullivan Show, 22.01.67)
12.She's Still A Myster (Ed Sullivan Show, 15.10.67)
13.Daydream (Ed Sullivan Show, 19.03.67)
14.Bald Headed Lena (Ed Sullivan Show, 19.03.67)
15.Only Pretty, What A Pity (Ed Sullivan Show, 15.10.67)
16.Darlin' Be Home Soon (Live 22.01.67)
17.Interview With Dick Clark (American Bandstand 28.10.65)
Original Backcover (1960s Records ‎– R&B50)
(https://www.discogs.com/The-Lovin-Spoonful-Live-On-TV-1965-1967-/release/14490932)
"Like Pete Townshend in The Seeker American folk-rock drew equally from Bob Dylan and The Beatles, a Venn diagram intersection of fine singles from West Coast bands such as The Byrds, Love, The Turtles, The Mamas and The Papas, The Buffalo Springfield and The Beau Brummells. The Lovin’ Spoonful were every bit their equal but came from the East Coast, Greenwich Village scene. In July 1965 the band hit number nine in the Billboard chart with their debut single Do You Believe In Magic? – chiming electric guitars and the clarion call to “believe in the magic of rock’n’roll, believe in the magic that can set you free”.
The first two tracks here were recorded at the Moulin Rouge on Sunset Boulevard, Los Angeles in front of a live audience. The bill also included Bo Diddley, The Ronettes, The Byrds, Ike & Tina Turner and Donovan. The Spoonful got off to a shaky start and had to re-start Do You Believe In Magic?  Second hit single You Didn’t Have To Be So Nice (Billboard #10) is very much in the style of its predecessor. On The Road Again is notable for Zal’s enthusiastic performance, emphasied by his distinctive stripey sweater and pudding-bowl haircut. From Shindig comes ensemble performances of Let The Good Times Roll and When The Saints Go Marching In.  Do You Believe In Magic? soundtracks some synchronised go-go dancing and Did You Ever Have To Make Up Your Mind is understated and charming. The less well-known There She Is works as a duet between Sebastian and Butler. An easy-listening Help sung by Joe Butler leads straight into another effervescent take on Do You Believe In Magic?, the latter performed in front of a mocked-up red London bus for no apparent reason. Zal takes lead vocals on a version of contemporary novelty May The Bird Of Paradise Fly Up Your Nose, a hit for Little Jimmy Dickens. From the same edition of Shindig comes another You Didn’t Have To Be So Nice.
The remaining six tracks are taken from the Spoonful’s three 1967 appearances on the Ed Sullivan Show. Nashville Cats is Sebastian’s wry tribute to the “1,352 guitar pickers in Nashville”. Darlin’ Be Home Soon is virtually a John Sebastian solo performance. She’s Still A Mystery is a good example of a late-period Spoonful single, Only Pretty, What A Pity a less-good example, possibly because Sebastian was not involved in its writing. The laidback Daydream is an American take on Sunny Afternoon whilst the intense version of Bald-Headed Lena takes us back to 1964 and The Night Owl in Greenwich Village.
Today The Lovin’ Spoonful do not receive the same degree of attention or respect as Love, The Byrds or The Buffalo Springfield – no lengthy magazine retrospectives, no weighty box sets or ponderous TV documentaries. But during Sebastian’s golden streak from 1965-1966 all seven of the Spoonful’s singles went top ten in the Billboard charts, an unprecedented achievement. Listening to these recordings the excitement they exude is contagious.  The interview with Dick Clark does little to illuminate the band’s appeal, but then he was “trying to tell a stranger about rock’n’roll ”.
1967 saw the end of folk-rock and the effective end of the Spoonful when a drug bust precipitated Zanovsky’s departure. Writing three years later Nik Cohn provided an elegant eulogy.  “As for folk/rock itself, the style passed, as it was bound to do: it was too soft, too subtle to hold the attention of a mass teen audience for long and pop resolved back into hardrock again”."
Sleeve notes: Tiger Lily (via WhatsUp) 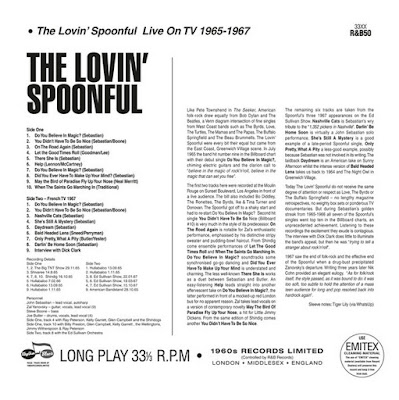