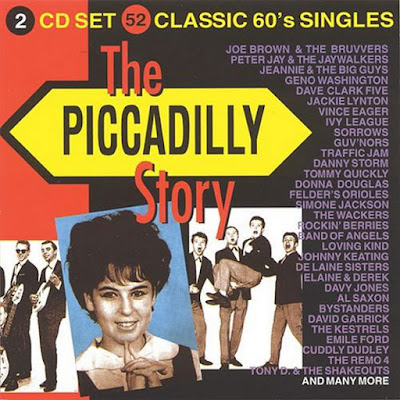 Most Americans are probably unfamiliar with Piccadilly Records, an offshoot of the British Pye Records label, launched in April of 1961. Over the six years of its existence, however, Piccadilly became an outlet for many of the label's British beat releases, as well as its imprint for soul records (especially Northern soul) and psychedelic experiments, totaling some 400 singles and 300 LPs. Additionally, the label actively solicited independently produced masters, thus becoming an outlet for some of the more cutting-edge pop of the period. This two-CD set offers 52 songs that profile some of the better acts ever to appear on the label, delineating the development of British pop/rock -- it starts off as very British, with Joe Brown & the Bruvvers doing a cheerful Cockney novelty tune called "Crazy Mixed Up Kid." The first of Emile Ford's two solo charting singles, "Half of My Heart," represents the pop/rock crooning of the period, and "Theme From Z Cars" (a popular television show), which hit number eight in England, represents the label's first major hit. Davy Jones (not the guy from the Monkees, or David Bowie), an American soul singer residing on the other side of the Atlantic, gave Piccadilly its first great rock & roll single, "Don't Come Crying to Me," which is followed here by Joe Brown's classic "Picture of You" and the Del Shannon-like "The River's Run Dry," by Vince Hill. There's some solid early-'60s style rock & roll scattered throughout the first disc: the early Dave Clark Five single "I Knew It All the Time," which offers a sound that anticipates "Catch Us if You Can," with an uncharacteristic girl chorus the only unfamiliar element; Jackie Lynton's "All of Me," featuring the debut of a young lead guitarist named Albert Lee; the Buddy Holly-style "Long Gone Baby" by Buddy Britten & the Regents, which was good enough to get Britten an audition for Holly's producer, Norman Petty.
And then there's the improbably named Cuddly Dudley, whose loping "Ferryboat Ride" is an amazing cool, laid-back piece of rock & roll balladry. The Kestrels and Elaine & Derek add little to music history with their covers of American hits, though the former group's experience obviously helped members Roger Cook and Roger Greenaway (later known together as David & Jonathan) gain a foothold in the business. Their presence, along with that of Vince Eager's cover of Conway Twitty's "Heavenly" and Simone Jackson's rendition (superb though it is) of "Ain't Gonna Kiss Ya" (originated by the Ribbons), illustrates the bind that even the best British labels of the period were in -- their biggest sellers and most memorable records were covers of hits that had originated in America, usually done in a style approximating the original. Even when the artist did something different, such as Donna Douglas' "He's So Near," it was frequently ignored. The Liverpool sound came to Pye Records in the guise of the Searchers, while Piccadilly got such acts as Tommy Quickly and Jeannie & the Big Guys, whose "Tip of My Tongue" and "Don't Lie to Me," respectively, were enjoyable if not overly memorable Mersey-style stompers; Robb Storme & the Whispers' "To Know Her Is to Love Her" was memorable, with its solid backbeat and heavy rhythm guitars, but somehow it never charted and hasn't been heard very much until now; similarly, Linda Doll & the Sundowners' "He Don't Want Your Love Anymore" is a record that should have stormed into the U.K. Top Ten, yet never did anything -- it and the rest of the prime tracks on this set more than justify the purchase, just to discover them.
Piccadilly was ahead of the British Invasion curve with its release of "Sally Go Round the Roses," even if it wasn't their recording, by the Remo 4, that turned that song into a standard. The label did have one release that became downright ubiquitous on this side of the Atlantic, in the form of "Cast Your Fate to the Wind" by Sounds Orchestral, arranged by John Schroeder, which reached the Top 20 on the charts of virtually every industrialized nation in the world. Everything on the second disc is either a variant on American pop/rock, such as Barbara Ann's British Invasion-style adaptation of "You've Lost That Lovin' Feeling," with its heavy rhythm guitar and drums, or Mark Peters & the Silhouettes doing a piece of Brit-beat balladry in "Don't Cry for Me" and the Wackers' Billy Fury-like "The Girl Who Wanted Fame." It's all very listenable, even enlightening material, mostly R&B-focused stuff by artists such as Joe Meek alumnus Bobby Rio, Keith & Billie, and Geno Washington & the Ram Jam Band, interspersed with a few impressive girl group entries, such as "Why Don't I Run Away From You" by Antoinette (who deserved to chart) and some inventive rock & roll, most notably "Ain't That Peculiar" from the Loving Kind, featuring Noel Redding on lead guitar. Ironically, amid all of this excellent work, the label was running out of time as music was shifting around it throughout 1966 -- those R&B-style numbers and Clinton Ford's Elvis Presley-like "Run to the Door" marked the tail end of the label's three-year run of success. They didn't go down without a fight, however, as demonstrated by Timebox's gorgeous "I'll Always Love You" and Traffic Jam's "Almost but Not Quite," which bring up the rear in fine style. The set is well mastered, with crisp, punchy sound throughout and extensive annotation on each artist and track.
Various-The-Piccadilly-Story (1993)
Tracklist 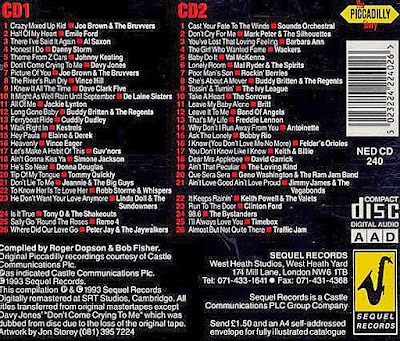