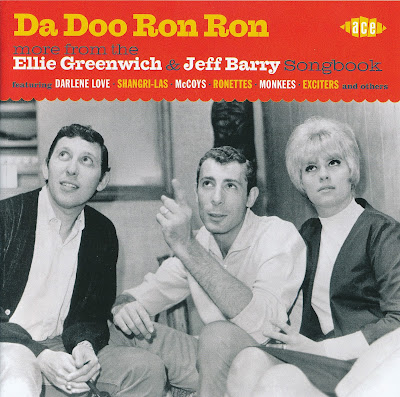 Following 2008's Do-Wah-Diddy collection on Ace Records, Da Doo Ron Ron offers up another installment of high points and relative obscurities from the power duo of early girl group songwriting, Ellie Greenwich and Jeff Barry. On the first collection, many fans noticed the absence of any of the hits the pair penned for artists on Phil Spector's Phillies label, which were tied up in licensing issues at the time. With those issues rectified, Da Doo Ron Ron opens up with the definitive girl group standard "Baby I Love You" by the Ronettes. This song, along with hits by other Phillies artists like Darlene Love and the Crystals, as well as ubiquitous chart-toppers by the Shangri-Las, the Dixie-Cups, and Lesley Gore, can lend the collection a girl group anthology/best-of feel. This is offset by the inclusion of far lesser-known tracks such as the soulful "I Know It's All Right" by Sam Hawkins and girl group stomper "When the Boy's Happy (The Girl's Happy Too)" by the Four Pennies. One of the best rarities on Da Doo Ron Ron is an electric version of "All Grown Up" by the Exciters, a short-lived vocal group best known for its Northern soul sides. This song sat unissued in the vaults for years while a less-inspired interpretation by the Crystals lingered in B-side mediocrity. While Greenwich and Barry reached the summit of their success as songwriters in the booming early-'60s avalanche of girl group sounds, they continued producing hits long past their Brill Building heyday. The collection is rounded out by a handful of later-'60s compositions for the increasingly groovy love generation, including the Monkees' inspired 1967 softly sleazy dance party jam "She Hangs Out" and respectable submissions from Manfred Mann and the McCoys. Neither songwriter made resounding waves as recording artists, though both Barry and Greenwich tried their hands as pop stars. Da Doo Ron Ron closes out with one solo song each from the songwriting team. Hearing the two as artists highlights the personal connection inextricable from writers performing their own material. Running the gambit from universally popular smash hits to lesser-known readings of songs that were huge hits for other artists, this compilation is even more evidence of a golden era of hit songwriting, and a testament to the malleable pop perfection of Greenwich and Barry's enduringly amazing creative hot streak in the early '60s. 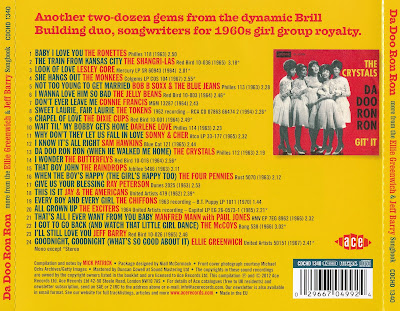