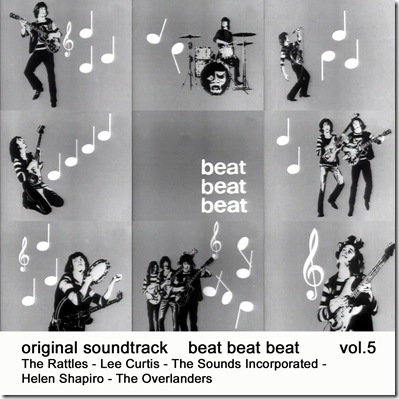 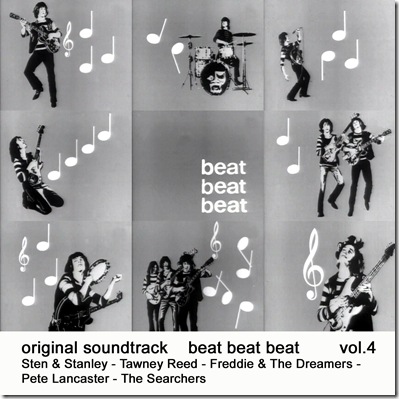 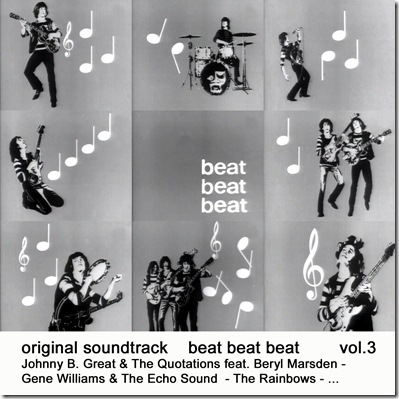 THIS SERIES POST’s  FROM  JANCY
Beat Beat Beat - was a German music programme that ran during the sixties. Not to be confused with the other well known German pop programme Beat Club, Beat Beat Beat was broadcast out of Frankfurt commencing in 1966. The programme ran to 26 episodes between its launch in 1966 and the final programme in January 1969 all of which are still in the German television archives. The shows were eclectic affairs and included performances by artists as diverse as Eric Burdon and the New Animals, The Move, Sam and Dave, Cat Stevens and Barry Ryan to name just a few
Beat! Beat! Beat! Передача снималась в Франкфурте-на-Майне и была известна тем, что в ней присутствовал исключительно живой звук. В передачах можно будет увидеть выступления таких групп, как The Small Faces, The Kinks, Manfred Mann, The Sorrows, The Rattles, The Spenser Davis Group, The Creation и других.
In the latter half of the 1960s, the seminal German show BEAT BEAT BEAT offered up the best of rock music. This release selects highlights from the series, revealing rare performance footage of music legends : ....
01 - Intro
02 - Info
03 - Daddy Rolling Stone / The Koobas
04 - Somewhere In The Night
05 -                     / Cherry Wainer & Don Storer
06 - Take Me For A Litlle While / The Koobas
07 - Baby Don't Leave Me
08 - Stubborn Kind Of Fellow
09 - Info
10 - I Can't Stand By You / Kenny Lynch
11 - Get Out Of My Way
12 - Info
13 - Walk On The Wild Slide / Cherry Wainer & Don Storer
14 - A Well Respected Man / The Kinks
15 - Milk Cow Blues
16 - Last Night /  Cherry Wainer & Don Storer
17 - Till The End Of The Day / The Kinks
18 - I'm A Lover Not A Fighter
19 - You Really Got Me
Posted by: D&J (Dmitrich) на 12:00 4 comments:

The Happenings, the '60s vocal group known for their updated, four-part harmony arrangements of pop standards, scored a series of hits, starting in the summer of 1966 with their Top Ten revival of the Tempos' 1959 Top 40 hit "See You in September." The Happenings recorded for fellow vocal group the Tokens' label, B.T. Puppy Records. In the summer of 1968, after they had placed eight singles in the Hot 100, B.T. Puppy issued the 12-track LP Golden Hits!, which collected those eight hits -- "See You in September" and the group's other Top Ten, "I Got Rhythm"; the Top 20 hits "Go Away Little Girl" and "My Mammy"; and the chart entries "Goodnight My Love," "Why Do Fools Fall in Love," "Music Music Music," and "Breaking Up Is Hard to Do" -- as well as three non-charting singles, "Girl on a Swing," "Randy," and "Sealed With a Kiss," and a previously unreleased revival of "Tea for Two." In 1969, B.T. Puppy switched distributors from Jubilee Records to Warner Bros., and in the shuffle the Happenings ended up on Jubilee. After issuing their Piece of Mind LP, Jubilee decided to compile its own Happenings hits collection and released an album called Greatest Hits that duplicated much of the contents of the previous year's Golden Hits! disc. Fast-forwarding 32 years brings us to this CD reissue on Wounded Bird Records, its tracks licensed from that great repository of old record catalogs, Rhino. Wounded Bird has combined the contents of the Happenings' Golden Hits! and Greatest Hits albums for Greatest Golden Hits, eliminating the many duplications, of course. What is left might easily have been called "Golden Hits! [Bonus Tracks]" since it is actually the 12 tracks from Golden Hits! with a couple more non-charting singles ("Girls on the Go," "Crazy Rhythm") and a couple of B-sides ("You're in a Bad Way," "He Thinks He's a Hero") added at the end. The Happenings' last chart single, a medley of "Where Do I Go/Be-In/Hare Krishna" from the Broadway musical Hair, released on Jubilee, is not included; all the added tracks are from 1966-68 and were originally released on B.T. Puppy. And with a running time of only 42 minutes, the album cannot be called the best possible single-disc Happenings CD. As of its release in 2001, however, it could be called the only one, and that counts for plenty.

The Youngbloods could not be considered a major '60s band, but they were capable of offering some mighty pleasurable folk-rock in the late '60s, and produced a few great tunes along the way. One of the better groups to emerge from the East Coast in the mid-'60s, they would temper their blues and jug band influences with gentle California psychedelia, particularly after they moved to the San Francisco Bay Area. For most listeners, they're identified almost exclusively with their Top Ten hit "Get Together," but they managed several respectable albums as well, all under the leadership of singer/songwriter Jesse Colin Young.

Young got his start on the folk circuits of Boston and New York, and had already cut a couple of solo albums before forming the Youngbloods. John Sebastian was one of the supporting musicians on Young's second LP, and comparisons between the two -- and between the Youngbloods and the Lovin' Spoonful -- are inevitable. Both groups offered good-timey folk-rock with much stronger jug band influences than West Coast rivals like the Byrds, though the Youngbloods made greater use of electric keyboards than the Spoonful, courtesy of the enigmatically named Lowell "Banana" Levinger. The Youngbloods didn't craft nearly as many brilliant singles as the Lovin' Spoonful, but (unlike the Spoonful) endured well into the hippie/psychedelic era.

While Young was always the focal point of the band, their first two albums also had songwriting contributions from guitarist Jerry Corbitt. Produced by Felix Pappalardi (who also worked with Cream), these records (The Youngbloods and Earth Music) were engaging and mature, if inconsistent, folk-rock. Corbitt's "Grizzly Bear" was a small hit, as was "Get Together," a Dino Valenti song that had previously been recorded by Jefferson Airplane. The Youngbloods' slow, soulful interpretation of "Get Together" was definitive, but it wouldn't reach the Top Ten until it was re-released in 1969, after the song had been used in a television public service ad.

By that time, Corbitt had left, and the Youngbloods, reduced to a trio, were living in Marin County, CA. 1969's Elephant Mountain was produced by, of all people, Charlie Daniels. Reflecting the mellowing influence of San Francisco psychedelia, it was their best effort, featuring some of Young's best songs. They released a few more albums in the early '70s (some live), but on these the mellow California rock sound that had served them well on Elephant Mountain had begun to turn limpid and wimpy. The group broke up in 1972, and Jesse Colin Young had a long and moderately successful career as a solo singer/songwriter.

The Viscounts were one of those odd pop/rock & roll hybrid groups that were common to both America and England at the end of the 1950s and the start of the '60s, but which always seemed to do better in England. The trio coalesced out of an eight-piece outfit called Morton Fraser's Harmonica Gang based in London — they were a variety act that were popular on television, and did a few world tours during the second half of the '50s. Manchester-born Don Paul, who had won a few important talent competitions, including Opportunity Knocks on British television, joined the octet in 1956, and he soon met another newcomer, Ronnie Wells, winner of a recent harmonica competition, from Farnborough, Hampshire. And in 1958, Indian-born ... Read More...

The Viscounts - The Pye Anthology

Not the American outfit of that name, but the British trio of Gordon Mills, Don Paul, and Ronnie Wells are featured here, on 31 of their early-'60s recordings for Pye Records. The sound is a uniquely British/European adaptation of rock & roll, melding pop and traditional tunes with guitars and drums and a beat — picture a branch of teen pop spun out of the same sensibilities that yielded "Ain't She Sweet" and "My Bonnie" by the Beatles and Tony Sheridan from their Hamburg sessions. The Four Preps' "Money (Is the Root of All Evil)," which is covered here from 1961, is a long way from the Motown-generated "Money (That's What I Want)" as a notion or a song, but it represents what the Viscounts and their management aimed for as an audience — and as a warning, a lot of Americans (and Britishers too young to know) may really hate this sort of hybrid of rock & roll and the music hall represented here. The three singers seemed willing to do whatever would sell, and some of what's here did do that — "Shortnin' Bread" peaked at number 16 in England — but there were some decent rock & rollers present on many of these records, including British rockabilly guitarist Joe Brown (who played on their debut Pye single, "Rockin' Little Angel" b/w "That's All Right"), and the group did tour with Eddie Cochran and Gene Vincent. They did do a decent cover of "Who Put the Bomp (In the Bomp Bomp Bomp)," but it's juxtaposed with "Honey Come On, Dance With Me," a decided pop-style number that was theme to the Spin-A-Long TV show, hosted by DJ Alan Freeman, whose notions of pop-based rock & roll were perfectly represented by the Viscounts. These guys were hip enough to share a program with the Beatles early in the latter's national stardom, but not to survive what the Beatles and the acts they pulled onto the national U.K. charts did to rock & roll and pop music. Actually, the group's material here from 1962 onward is not bad, and is of a piece with the work of Helen Shapiro and other pre-Beatles pop/rockers, but be warned — the last half-dozen songs here were derived from their contribution to a trad jazz compilation album, and feature the Viscounts shoehorned into a 1920s repertoire that will only be appreciated by listeners familiar with that British offshoot of Dixieland jazz.

The Spots - Beat A Go Go

The Boss Guitars - Play The Winners 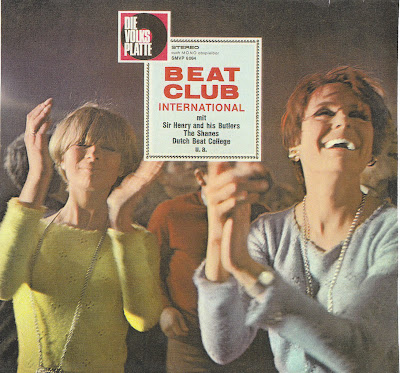