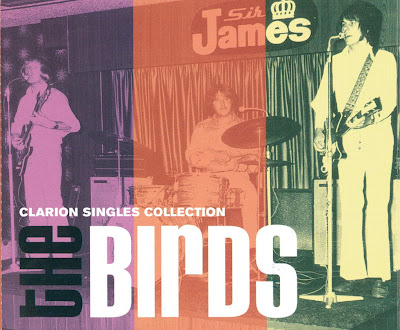 The story is, two British musicians, guitarist Terry Clarkeand bassist Brian Curtis, emigrated down under in 1969 and laying claim to being members of (Ronnie Wood's) Birds, signed to Clarion Records, they even cut the real Birds' 'No Good Without You' fo  ...

A Perth-based band. They had no link or connection with the U.K. band of the same name other than the selection of No Good Without You, a cover of the U.K. Birds release, as the 'B' side to their first release. The 'A' side was a cover of Honeybus' U.K. hit I Can't Let Maggie Go. It seems the band tried to capitalise on the existence of their U.K. counterparts and a publicity handout even stated that Terry Clarke and Brian Curtis had played all over England and appeared on T.V. as the U.K. Birds.

Their second release was a cover of I See The Rain, a Marmalade single backed by Rene, which had been recorded by The Small Faces in the U.K.. Neither of these efforts was very distinguished.

Their third release was the best known - Dust In My Pants was the flip to another U.K. Birds (or Birds Birds) song (Say Those) Magic Words.

The myth of a U.K. connection continued when The Ugly Things , Vol. 2 compilation once again brought the band to the public's attention by featuring Dust In My Pants. It transpires that Terry Clarke and Brian Curtis were both from Britain and played together in a band called The Clockwork Oranges, who released one 45 on Ember in the U.K.. Clarke was also in The Herd, being replaced by a certain Peter Frampton, but Clarke did not play on the band's Parlophone releases.

Clarion was a local Perth label distributed by Festival. 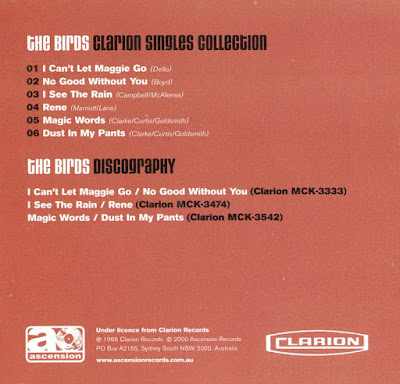