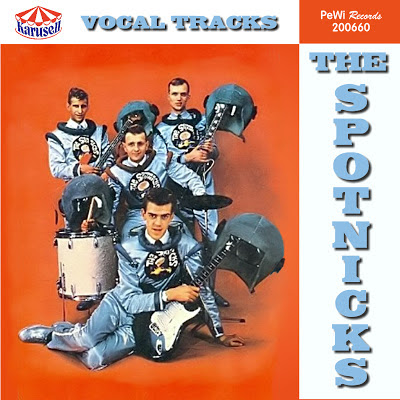 If remembered at all today, it is probably thanks to their silly astronaut costumes, but in the '60s the Spotnicks were one of the most successful instrumental rock groups, alongside the Shadows and the Ventures. Their very specific sound had more in common with the Shadows, being clean and intentionally gentle. It originated from their first primitive demo recordings, but the record company liked it and, being plastic and twangy, it was promoted as a space sound. Already in the late '60s it was outdated, but that didn't stop the group from having big successes throughout the decade. In the '70s the sound was definitely antiquated, but like the Ventures, the Spotnicks found reliable audiences in Japan and Germany, as well as a cult and nostalgia following around the world. the Spotnicks have sold over 20 million albums, making them among the most successful Swedish groups ever, surpassed perhaps only by ABBA and Roxette. By the late '90s they had released 39 studio albums, recorded roughly 700 songs, and had more than 100 members in the different constellations of the band.

the Spotnicks were formed in Göteborg, Sweden, in 1957, by guitarist and undisputed bandleader Bo Winberg. The other members were guitarist and singer Bob Lander, drummer Ove Johansson, and bassist Björn Thelin, several of whom had already played together in local rock & roll bands like the Blue Caps, Rock Teddy, and the Rebels. The first year they performed under the name the Frazers, but soon changed it to the Spotnicks. In 1961 they were signed by Karusell and released their first singles containing mostly instrumental covers of famous songs. The selection of songs was as varied as the performances were homogenous, including titles like "Hava Nagila" and "Johnny Guitar." Later the same year, the Spotnicks toured Germany, France, and Spain, and in 1962 they released their debut album, The Spotnicks in London, recorded on their first trip to England. Featured on this tour were the space suits that the band would wear on-stage until 1969.
"Hava Nagila" became a hit in England in 1963, and the same year Johansson left and was replaced by Derek Skinner. The rest of the '60s led to increasing success in Europe, the U.S., and Japan, and the band even managed to compete with itself on the Japanese charts when the Spotnicks' song "Karelia" took the first position from the Feenades' "Ajomies." The song was the same, just recorded under different titles. The Feenades were a Finland-based side project to the Spotnicks, built upon Winberg and Peter Winsnes, who had joined the Spotnicks in 1965. Winberg also released less successful recordings under the name the Shy Ones. Compared to the following decades, the '60s were a relative stable period for the Spotnicks in terms of the group's lineup. Some new members were recruited, though, like drummer Jimmy Nicol, bassist Magnus Hellsberg, and drummer Tommy Tausis, who had earlier played with Tages
In 1969 the Spotnicks disbanded, but Winberg continued to record using the name until the group reunited in 1972 upon the request of a Japanese record company. The same year, "If You Could Read My Mind" from the album Something Like Country became a big hit in Germany. the Spotnicks would retain their popularity there for a long time, even as it faded elsewhere. Only the Japanese audience proved more faithful and, accordingly, the Spotnicks devoted most of their touring during the '70s to these two countries. After the release of 1972's Something Like Country (the Spotnicks' best album according to many fans), they had practically ended being a band, consisting mainly of Winberg and various session musicians.
If the Spotnicks had started out as rock & roll, in the '70s they turned more toward easy listening, or even exotica, although perhaps not by changing their own sound as much as by stubbornly keeping it while trends changed. By the '80s they had essentially become a curiosity at home, but kept up their popularity in Germany and Japan. During the '90s Winberg still toured using the name the Spotnicks, but to little attention. And even in their hometown of Göteborg, the Spotnicks were mainly forgotten, except for an occasional article in the local paper reminding readers of some guys with silly helmets who were once international stars. 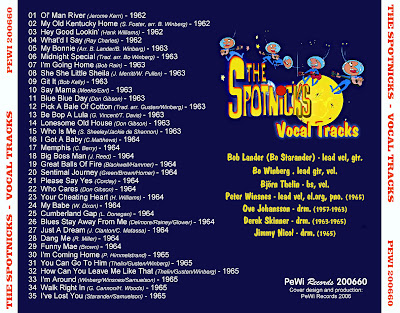