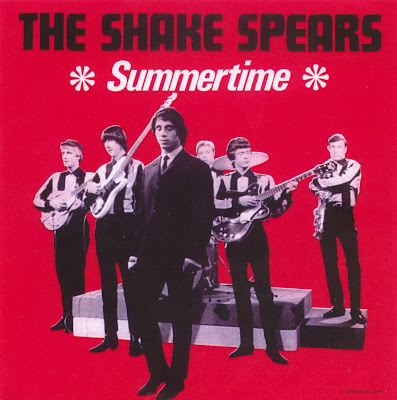 This Rhodesian outfit - who were living in Belgium in the early sixties - recorded some amazing beat & rock singles. Both Belgian rock archives ' Rock over Belgium' and ' Witlof from Belgium' have rather good discographies on the band's recordings, including solo recordings of Brian and Gene Latter. Apart from the discographies the Shake Spears only earn a brief mention once or twice in both publications. On top of that, their one and only LP was originally released in...The Netherlands ! Other Dutch connections were a couple of TV shows in Belgium where the 'Spears' were playing together with Cuby & the Blizzards of which they were much impressed by the guitar sound. In 1968, when the band was playing the most popular club in Brussels, 'Les Cousins', the singer from another Dutch beat group, The Shoes, joined them on stage for a few numbers. Well, reason enough to take a look in to the band's "live" line-up:
•Chris Kritzinger - Keyboard, guitar & vocals
•Perry Jordaan - Guitar & vocals
•Johnny Kreuger - Drums & vocals
•Calvin Coleman - Bass
•Alan Escombe-Wolhuter - Bass
•Gene Latter - Vocals
•Ron Patton - Saxophone
Some of the members of this line-up originated from the ranks of the Bulawayo band, the PHANTOMS.
The Shake Spears arrived in Belgium in December 1964 from Northern Rhodesia (now Zambia). Before that happened they were successful in their own country, playing as the Dynamics. In 1963 they established their own night club 'The Club Dynamique", which quickly became the favourite haunt of television and theatrical personalities. At this time fans, friends and well-wishers advised the group that the rest of the world was entitled to an opportunity to enjoy their musical skills, too.
MORE : http://www.rhodiemusic.com/bands/bands-s.htm
****
THE SHAKESPEARES
BIOGRAPHIE COMPLETE ET OFFICIELLE
01 - Summertime
02 - i'll go crazy
03 - Give it to me
04 - Stop playing that Song
05 - Summertime Blues
06 - Lucifer
07 - The Shake Spears
08 - Do that again
09 - Don't play funny Games
10 - What happened
11 - Shake it over
12 - Main Theme from 'the Saint'
Posted by: D&J на 13:45