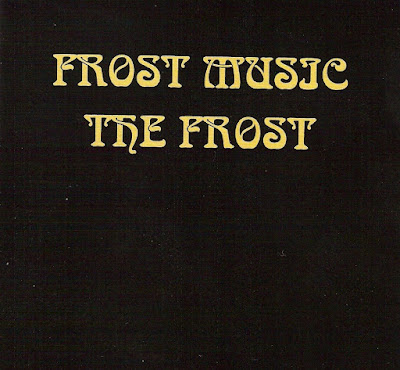 Initially known as The New Bossmen, then Dick Wagner & The Frost
http://www.motorcitymusicarchives.com/frost.html
*Dick Wagner (Ld. G, V)
*Donny Hartman (G, V, Harmonica)
*Gordy Garris (B, V) Beaux Jens
*Bobby Rigg (D, V)
http://www.thedonnyhartmanband.com/discography.htm
Detroit rockers the Frost were led by singer/guitarist Dick Wagner, a longtime staple of the southeast Michigan music scene who during the early 1960s led local favorites the Bossmen. After the Bossmen disbanded -- bassist Mark Farner later went on to form Grand Funk Railroad -- Wagner founded the Frost with guitarist Don Hartman, bassist Jack Smolinski and drummer Bob Riggs; after exchanging Smolinski for Gordy Garris, the group debuted in 1968 with the single "Bad Girl," and upon signing to Vanguard they issued their 1969 debut LP Frost Music, scoring a regional smash with the single "Mystery Man." Rock and Roll Music, recorded live at Detroit's famed Grande Ballroom, followed later that same year, but despite earning a cult following throughout the midwest the Frost failured to capture a national audience, and in the wake of 1970's Through the Eyes of Love the group disbanded. Wagner later went on to considerable success as a session guitarist, working with artists including Lou Reed, Alice Cooper and Peter Gabriel.
01. Jennie Lee" 3:05
02. The Family" 3:03
03. A Long Way Down from Mobile" 3:08
04. Take My Hand" 4:20
05. Mystery Man" 4:27
06. Baby Once You Got It" 2:38
07. Stand in the Shadows" 8:03
08. Little Susie Singer (Music to Chew Gum By)" 2:45
09. First Day of May" 3:31
10. Who Are You?" 5:18
"Sweet Jenny Lee" opens the album Frost Music like some unholy marriage between the Zombies and Ted Nugent's Amboy Dukes. And that sums up nicely this wonderful amalgam of British and Detroit rock, a surprisingly poppy effort from Dick Wagner and company. As a future purveyor of hard rock, and within the decade, eventual producer of his friend Mark Farner, the English sounds of bands like Kaleidoscope (U.K.) reverberate through songs like "Stand in the Shadows." With hints of very early Pink Floyd meets Strawberry Alarm Clock in track two, "The Family," Frost Music is more than a respectable effort from the young Wagner, and an adventurous offering from the label famous for Buddy Guy, Joan Baez, Eric Andersen, and Mimi & Richard Farina. Outside of Circus Maximus, the Frost are the deviation on this legendary folk label. Wagner's voice is strong on the venturesome "Stand in the Shadows," but it is the song with different titles on the album jacket and disc, "Susy Singer" or "Little Susie Singer (Music to Chew Gum By)," which is the album's highlight. A very psychedelic combination of ideas and sound effects that both the Alice Cooper Group and the Velvet Underground were playing with at the time. Wagner's eventual impact on the leaders of both groups would emerge in just four years when he co-led the Rock & Roll Animal Band with Steve Hunter for Lou Reed, and when that group went on to backup Alice Cooper, becoming in some paradoxical fashion, a macho foundation for one of music's most influential glitter/glam rock ensembles. The song "First Day of May" is a return to the Brit-pop sound that is the underlying theme here. Just a few years later, Blue Öyster Cult would produce a song with similar atmosphere entitled "Then Came the Last Days of May" on their Columbia debut, tempo a bit more subdued, but with B.O.C.'s awareness of what was going on in rock & roll, it hardly seems like a coincidence. The Frost were certainly more influential than they ever got credit for. "Who Are You" is really Syd Barrett/Floyd come to America. Hearing this music makes one wonder why Frost Music isn't as sought after as Moulty & the Barbarian's first album or Chocolate Watch Band. If Paul Revere & the Raiders and Leslie West's the Vagrants got immortalized on the Nuggets compilation, it makes the obscurity of the Frost all the more obliging. "Baby Once You Got It" is vintage '60s pop that bands like the Lyres and the Fleshtones have made a career out of emulating. In fact, this album is a delight for the '60s connoisseur and it shares a rare distinction with Alice Cooper's Easy Action, released in 1969 as well, both important and largely forgotten albums by artists who later proved their mettle, Wagner eventually becoming Alice Cooper's lead guitarist and co-songwriter. "A Long Way Down From Mobile" might throw the listener for a loop, sounding more like an outtake from James Taylor's backing band, but that's the curve Dick Wagner has always thrown. The Frost keep shifting from the garage rock of "Baby Once You Got It" to the English psychedelia of "Stand in the Shadows." The rest of the album, especially "Take My Hand," triggers again the comparison to Cooper's Easy Action. "Take My Hand" is as blatant a rip of the Byrds' "Eight Miles High" as the song "See the Light" by Extreme during their formative years. The Who and Byrds influences abound, and that Alice and Dick Wagner would join forces was only logical, as evidenced here in this very important and hard to find record.
http://www.wagnermusic.com/intro.htm
Posted by: D&J на 18:23