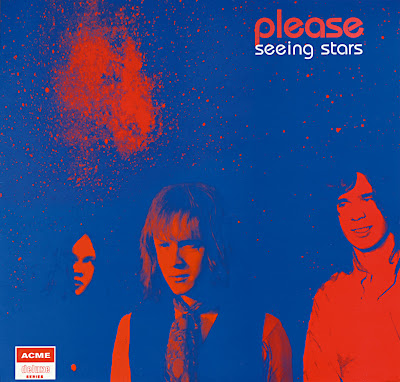 Please were a late-period UK psych outfit, better-known for the bands their members went on to join, notably Peter Dunton, who was playing in T2 within a year of this material's recording. The difference between the two bands is startling; Please have a sound that really predates their era, being more early than late psych, with much Farfisa, whereas T2 were definitely proto-prog, although both bands actually sound rather dated these days. I don't believe Please actually released anything much (at all?) at the time, so I presume Seeing Stars is your typical demos and outtakes collection. It seems to be quite highly rated by some psych fans, but to my ears, it falls between too many stools to really cut it all these years later.
1.Seeing Stars 2.Words to Say 3.Before 4.Time Goes By 5.The Road 6.Rise and Shine 7.Still Dreaming 8.Secrets 9.Who You Know 10.But 11.Steal Your Dreams
Completely different track listing than their other release, "1968 / 69". Please was a UK psych band that, well I think they had a lot going them, musically. The eleven cuts on Seeing Stars had never even seen the light of day until this CD was put out by Acme. Members of Please were apparently later in a couple of other bands, Bulldog Breed and T2. Some of these tracks remind me of early Pink Floyd, pretty much because of the keyboard arrangements, like "Words To Say", "Before", the wailing "Still Dreaming" (possibly the disc's best tune), "Secrets", "Who You Know" and "But". I thought "Time Goes By" had the characteristics of perhaps an early unreleased King Crimson B-side. Seeing Stars has nicely-done vocals, soaring mellotron, fluid guitar work and cleverly constructed songs to offer it's listeners. It's so good that on the first listen you'll fully understand as to why ' true psychedelia' has never really died, if you don't already.Truly great early British psych that gets better with each play. Line-up: Peter Dunton - keyboards, lead vocals & drums, Bernie Jinks - bass & backing vocals and Nick Spenser - drums. Should appeal to fans of early Floyd, Tomorrow, The Move, Yes, solo Syd Barrett and The Doors.
Posted by: D&J на 19:41