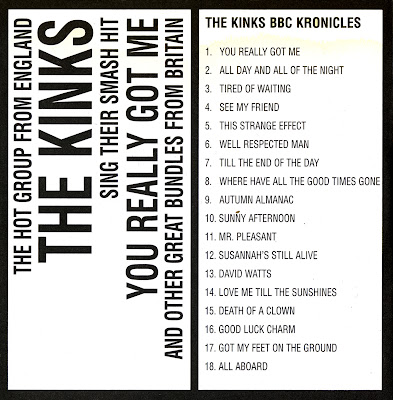 "The Kinks' truly live performances for the BBC between 1964-77; although many more songs were aired, these were usually the studio records with maybe re-recorded vocals. The years covered span the peak of their career from an artistic point of view, and most of their big hits from the time "

The heart of the Kinks beats hardest in brothers Ray Davies and Dave Davies, founder members and creative drivers. They formed the band in 1963 with Peter Quaife and Mick Avory and it took only three single releases until they released the seminal “You Really Got Me”: a noisy, rousing anthem for a generation. Their fourth single “All Day and All of the Night”, proved that this band were a keeper. Their first album was The Kinks, released in 1965.
****
They toured extensively and wildly, managing to get themselves banned from the US in 1965. This marked a change in Davies’ writing style, resulting in “Sunny Afternoon”, the landmark hit single in 1966 from The Kink Kontroversy album. Face to Face continued the progression of the band’s style, and Something Else by the Kinks (1967) was hugely acclaimed. They went one better with the concept album Village Green Preservation Society, a nostalgic look at the traditional values of the English countryside, which was loved by critics even though it didn't sell well.
In 1969 Peter Quaife was replaced by John Dalton, and the band released another classic album, the rock opera Arthur (Or the Decline and Fall of the British Empire). Also in this year, the US ban was lifted and they were finally able to tour in America.

The album Lola Versus Powerman and the Money-Go-Round, Part One was their most commercially successful so far, and their popularity in the US soared. Although a new five-album deal with RCA failed to help them recapture their earlier glories, they were sufficiently successful to maintain their momentum in the US and the UK.
The early 70s saw the Kinks dabble in rock opera with Preservation Act 1 (1973),Preservation Act 2 (1974), Soap Opera (1975) and The Kinks Present Schoolboys in Disgrace (1976).
In 1976 the band returned to rock and released Sleepwalker and Misfits. Low Budget(1979) was their hardest rocking LP yet and led to their biggest US success to date.
By 1984 the bubble had burst and the band entered a period of decline, although they continued to release albums. A revival of interest was sparked in the mid 90s, though this was more to do with the influence that their early years had on new generations of musicians.
***