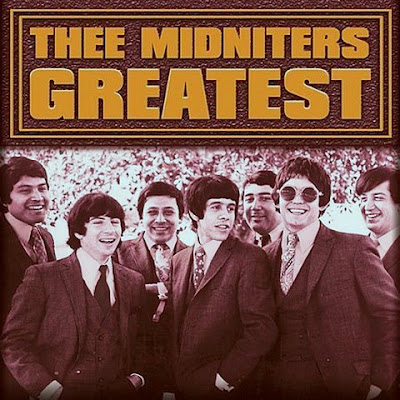 Indisputably the greatest Latino rock band of the '60s, Thee Midniters took their inspiration from both the British Invasion sound of the Rolling Stones and the more traditional R&B that they were weaned on in their native Los Angeles. Hugely popular in East Los Angeles, the group, featuring both guitars and horns, had a local hit (and a small national one) with their storming version of "Land of a Thousand Dances" in 1965. Much of their repertoire featured driving, slightly punkish rock/R&B, yet lead singer Willie Garcia also had a heartbreaking delivery on slow and steamy ballads. In the manner of other local phenomenon's like the Rationals (from Detroit), they were equally talented at whipping up a storm with up-tempo numbers and offering smoldering romantic soul tunes. After a few albums and an interesting detour into social consciousness with the single "Chicano Power," the group split in the early '70s, though their legacy is felt in later popular L.A. Latino rock acts like Los Lobos.
http://www.lunch.com/Reviews/song/Thee_Midniters_Greatest_Hits-wiki-1334460.html 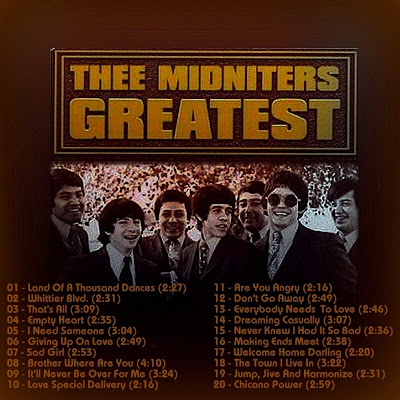 Before the release of this 2003 compilation, the absence of a Thee Midniters CD collection was one of the most egregious omissions in the catalog of 1960s rock on compact disc. This 20-track anthology happily rectifies that situation, including everything from the fine 14-song 1983 Rhino LP Best of Thee Midniters, and adding half a dozen other worthy selections. All of the band's very best cuts are here, whether it's the soul covers ("Land of a Thousand Dances," "Sad Girl," "Giving Up on Love," "The Town I Live In," "It'll Never Be Over for Me"); raucous bluesy garage rock ("Whittier Blvd.," "Jump, Jive and Harmonize," "Love Special Delivery," "Empty Heart"); or tasty romantic soul-pop originals ("Dreaming Casually," "Making Ends Meet"). There are, too, a few songs that sample the unpredictable directions into which the group occasionally flew, like the ghostly cover of jazz singer Oscar Brown, Jr.'s "Brother Where Are You?" and the Latin jazz-rock fusion of "Chicano Power." Audio purists might regret that some surface noise can be heard as the music was mastered from the best vinyl sources possible, rather than the original tapes, but really the vinyl noise is very faint and not a significant hindrance. It's also too bad that enjoyable oddities-rarities from the Thee Midniters discography like the psychedelic "Breakfast on the Grass," the Spanish ballad "Tu Despedida," and the searing instrumental "Thee Midnite Feeling" didn't make the cut. But given a 20-track cutoff point, it's hard to argue with the selection on this worthy summary of one of the finest 1960s American rock bands never to have a big national hit.
Posted by: D&J на 23:22