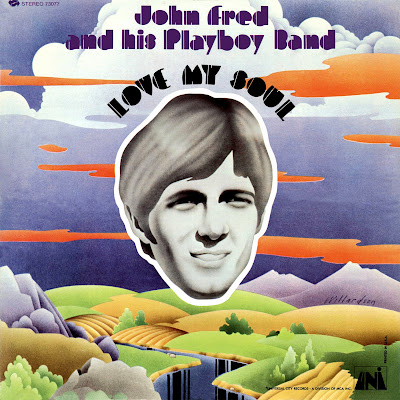 John Fred & his Playboy Band - Love My Soul
UNI 73077  1970
Another amazing gem from John Fred & the crew. It continues with the lasting rhythms and horn treatments.

The guitars are up loud in the mix and John’s vocals are playful and punchy. Their rewrite of “Sweet Soul Music” makes no sense, adding Pete Townsend, Harry Nilsson, and Johnny Winter to the list. What? They don’t make “soul” music!!!

Fred also turns The Beatles’ “Back In The USSR” into a raw blues song. Very weird. The originals are top-notch though except for the rather creepy track “The Big Show” which seems to start bad, get worse, and end with the feeling you’ve inhaled a mist of rust primer spray. Very psychedelic garbage.

Having left Paula to hang with the “big cats” at UNI (i. e. Neil Diamond, Andy Kim, and Big Black), John was on cloud nine, but ended up on cloud six instead. (Kupa99 RYM & redtelephone66) 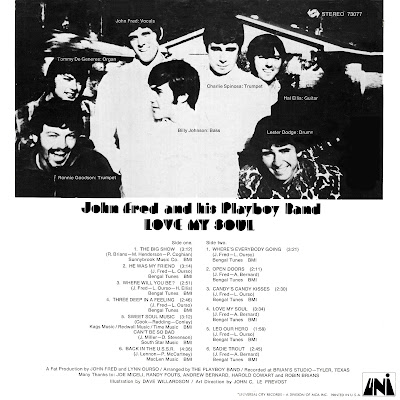 Calling the late John Fred Gourier a "one hit wonder" is akin to saying gold is "some sort of rock". He scored his first hit in 1959 with "Shirley", a Fats Domino-inspired piece that is anything but a novelty record.

And over the next several years, Fred became a pioneer in R&B and garage rock, releasing a wealth of singles that included the his phenomenal, pile driving interpretation of "Boogie Children" on the Jewel label.

By the time he put the Beatles' silly "Lucy In The Sky With Diamonds" in its place with the brilliant "Judy In Disguise (With Glasses)" for the Paula label in late 1967, Fred had already released two superb hard rocking albums for Paula.

But Fred's third Paula album, "Agnes English" exceeded all expectations. It is to date one of the most perfect examples of the fusion of R&B and psychedelia ever recorded, highlighted by the garage standard "Off The Wall" and the frantic and ominous "AcHenall Riot".

In February 1968, John Fred And The Playboy Band were again on the airwaves with the single, "Hey Hey Bunny" for Paula. In 1969, he switched to Uni Records and curiously tried the novelty single market again with the wonderful "Silly Sarah Carter", followed by a true to form album, "Love My Soul".

For the rest of his career, John Fred went back to his garage and R&B roots and recorded a number of critically accalimed LPs and CDs. Sadly, he died from kidney failure in 2005.

John Fred was one of the giants of garage band rock. To dismiss him as a one hit wonder is a tremendous affront to his verifiable legacy. .~ Michael McDowell