The Embermen Five ‎– Fire In Their Hearts 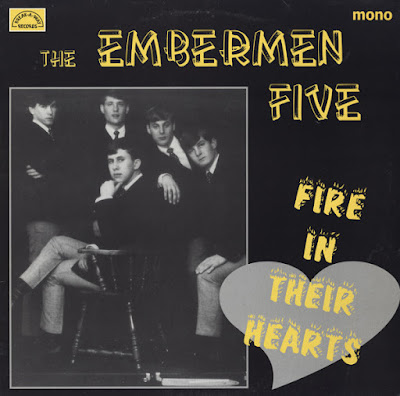 Dubbed "North Dakota's best '60s group" by author Tom Tourville in his book Rockin' the Northern Plains, garage combo the Embermen Five was formed in Minot, ND, in 1963 by 16-year-old keyboardist Ron Boen and drummer Herb Parker Jr. shortly after the former's family relocated from Salt Lake City. Recruiting classmates Pete Luxom on lead guitar, Paul Unwin on rhythm guitar, and Bob Johnson on bass, the fledgling group dubbed themselves the Demensions and rehearsed their instrumental covers of surf and R&B hits for a year before making their public debut at a local dance.

Luxom resigned in late 1964, and after adding new lead guitarist Larry Tanner and installing Parker as lead vocalist, the Demensions rechristened themselves the Embermen to avoid conflict with another similarly named local act. Modifying the moniker to the Embermen Five in early 1965, the band nurtured a devoted local following with its frequent appearances at school dances and related functions, and soon they were touring the state on weekends.

In the spring of 1966 they drove to Minneapolis, entering Kaybank Studios to record a pair of Parker originals, "Fire in My Heart" and "Without Your Love" -- issued on the Studio City label that June, the single was a local smash, topping Minot radio play lists for six weeks running. In August the Embermen Five opened for the Beach Boys, and after cutting an ill-fated session for Chess Records, they returned to Kaybank to record four more Parker originals: the first single from the sessions, the garage punk gem "That's Why I Need You," appeared on Studio City in the fall of 1967, and was quickly followed by the cult classic "Baby I'm Forgettin' You."

By 1968 the various members of the Embermen Five were attending college -- the grind of touring was wreaking havoc with music major Parker's vocal chords, so Tanner's 15-year-old brother was installed as a second vocalist. During the spring the band decamped to Century Recording in Fargo to cut their final single, the R&B-inspired "Do You Have to Be So Cruel" -- however, local radio instead seized upon the B-side, a cover of the Ernest Tubb composition "Tomorrow Never Comes." In mid-1968 the Embermen Five began to splinter -- first Larry Tanner exited to join the band Pierson Lake, and in the fall Parker quit to focus his full attention on college.

The following spring, Unwin joined the Marines, and in July 1969, the group officially dissolved. The Tanners later relocated to Oklahoma, where they formed a group called the Contagious Brothers -- Parker later signed on, and when they played Minot in 1978, the classic Embermen Five lineup reunited for their first live appearance in nearly a decade. In 2002 the Break-A-Way label compiled their vintage singles on the album Fire in Their Hearts, bolstering the package with live material recorded at the Minot Air Force Base in early 1968.