Jack London and The Sparrows & The Staccatos - Same & Initially 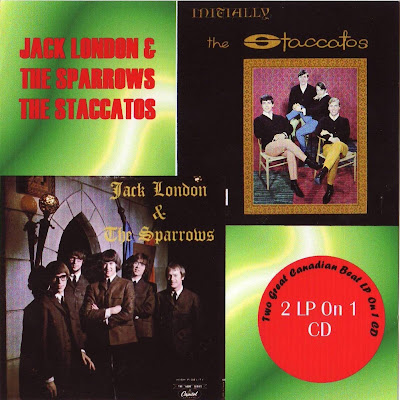 A kind of missing link in the history of Canadian rock, Toronto beat group Jack London & the Sparrows formed in Oshawa, Ontario, in early 1964. Singer London (born Dave Marden) was recently transplanted from London, England, when he founded the group with lead guitarist Dennis Edmonton, whose brother Jerry was soon installed on drums. After relocating to Toronto, the lineup solidified with the additions of ex-Swinging Doors bassist Bruce Palmer and keyboardist C.J. Feeney. Their British Invasion-inspired beat sound quickly found an audience, and London & the Sparrows were soon staples of the Toronto scene, headlining clubs including the Jubilee Auditorium (which just happened to be owned by the Edmonton brothers' father). After signing to Capitol, the band reached the number three spot on the Canadian charts with their 1965 debut single, "If You Don't Want My Love."

Palmer, however, felt confined by the Sparrows' sound and soon exited to join the R&B-flavored Mynah Birds. (He and fellow Mynah Bird Neil Young later resurfaced in the legendary Buffalo Springfield, while the group's frontman, Rick James, went on to record funk classics including "Super Freak.") With Palmer's arrival in the Mynah Birds, the band's previous bassist, Nick St. Nicholas, joined London & the Sparrows. Keyboardist Art Ayre replaced Feeney around the same time, and this iteration of the group soon entered the studio to record their sophomore single, "I'll Be the Boy," which cracked the Top 20. Its follow-up, "Our Love Has Passed," returned the group to the Canadian Top Ten, and London & the Sparrows issued a self-titled LP that boasted a more acid punk sound than their earlier material.

However, internal squabbling resulted in London leaving the group to mount a solo career. The remaining Sparrows carried on and recorded a final single, "Give My Love to Sally," that reached the number 13 spot. In September 1965, Ayre left the group and singer John Kay and keyboardist Goldy McJohn signed on. Rechristened the Sparrow, they traveled to New York City to record a single for Columbia, "Hard Time With the Law," before splitting with Dennis Edmonton (who continued performing under the name Mars Bonfire) and relocating to California. There the Sparrow renamed themselves Steppenwolf, and would go on to record the hard rock classics "Born to Be Wild" and "Magic Carpet Ride."
********
The Staccatos were formed in 1963 in Toronto by guitarists/vocalists Les Emmerson and Vern Craig, drummer/vocalists Mike and Rick Bell, keyboard player Ted Gerow and bassist/vocalist Brian Rading. After recording "Small Town Girl" for Capitol in 1965, the group recorded a few Coke commercials that resulted in the album Wild Pair, a collaboration with the Guess Who. The Staccatos released Initially the Staccatos in 1965 and The Five Man Electrical Band three years later, and took the latter album's name for themselves beginning with 1969's "It Never Rains on Maple Lane." With the new designation, they released Goodbyes and Butterflies (1971), Coming of Age (1972), Sweet Paradise (1973) and The Power of the Five Man Electrical Band (1974). After disbanding, Les Emmerson formed the Emmerson Electrical Band and later, Blue Blood. He now records as part of Cooper, King and Emmerson. 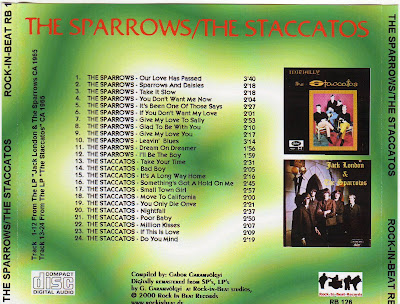