The Knack - Time Waits For No One (The Complete Recordings) 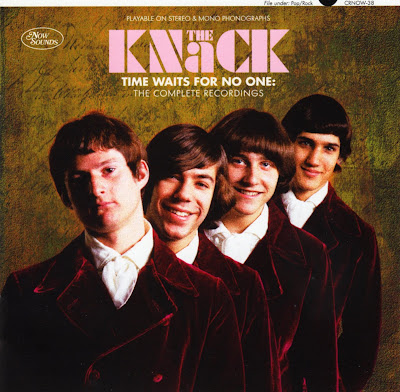 The original, ‘60’s Sunset Strip era Knack was formed in 1965 at Hollywood High by Michael Chain. The band was originally named The In Mates but after a Shindig road show changed their moniker to The Knack.
https://en.wikipedia.org/wiki/The_Knack_(1960s_US_band)

The original InMates line-up consisted of:

If you ever wanted an illustration of the idea that history is written by the winners, you need look no further than the story of the Knack. Everyone knows how Doug Fieger's heavily hyped skinny-tie band became a new wave sensation under that name via their blockbuster 1979 single, "My Sharona." But 12 years earlier, another L.A. singer/songwriter/guitarist led his band through its own brief swirl of publicity using the same band name and recording for the same label (Capitol). Although they were just as talented in their own way as the "My Sharona" gang, Michael Chain's '60s iteration of the Knack never came near a hit, and despite a big promo push for their initial batch of singles, they never cut a full album, and they quickly slipped through the cracks of history, unknown to all but hardcore '60s pop mavens. Hell, they weren't even the best-known '60s band to call themselves the Knack -- that honor goes to the London group that became better known after changing their name to Gun. Fortunately for the wider world, indefatigable '60s pop archivist label Now Sounds has gathered together the entire recorded output of Chain's Knack, finally giving them the album they always deserved, four and a half decades after the fact. The band released only four singles during its brief lifespan, and all the A and B sides are present and accounted for here, along with five previously unheard tunes and an alternate mix. The Knack's 1967 debut single, "I'm Aware"/"Time Waits for No One," shows the band's knack -- ahem -- for perky, Buckinghams-like pop on the latter tune and its penchant for pushing the envelope, with the odd time signatures and exotic addition of the zither-like marxophone on the former. From the subtle jazz shadings of "Softly, Softly" to the moody folk-rock feel of the unreleased Beau Brummels-ish "The Girl with the Dark Brown Eyes" (written for actress Barbara Hershey, Chain's objet d'amour at the time), it's clear that even in the short amount of time they had to evolve, the Knack already possessed an unusual amount of sophistication. Late as it is in arriving, their first full-length release is still a striking document. 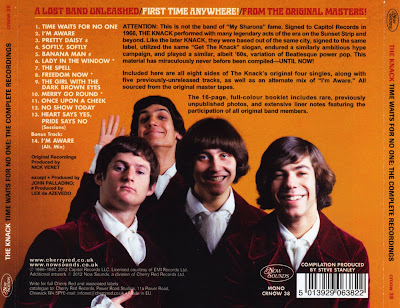 tags The Knack, US