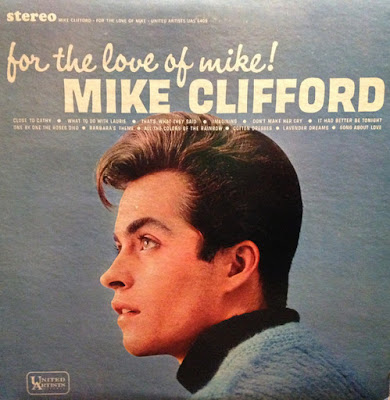 Mike Clifford was born in Los Angeles, California. His father, Cal Clifford, was a professional trumpeter, who took him to many of his engagements. Mike soon developed an interest in music and began taking voice lessons. While in school, Mike began to entertain at school and community functions, and by the age of 15 was performing at local nightclubs in Los Angeles. After singing for just a short time period, Clifford signed with Liberty Records in 1959. He recorded his first single that year, titled "Should I". The song was written and produced by Mark McIntyre and featured additional vocals from Patience and Prudence and Eddie Cochran on guitar.
Clifford met Helen Noga through an introduction by a friend and she agreed to become his personal manager after hearing him sing. Helen Noga and her husband John managed the career of Johnny Mathis, and were able to get Mike signed to Columbia Records. Later, after much hard work and rehearsing, Helen Noga brought Mike to meet Ed Sullivan who was so impressed with Mike’s poise and stage presence that he booked him for his TV debut, the first of three appearances on The Ed Sullivan Show.
Mike  first taste of success came at age 18 when "Bombay" became a hit in Venezuela. He appeared on the state owned Venevision in his own TV special.
However, Clifford's recordings for Columbia received little buyer’s attention, and in July 1962, Clifford signed with United Artists Records. Jerry Leiber and Mike Stoller produced several songs for Clifford, including his biggest hit "Close To Cathy", written by Earl Shuman and composed by Bob Goodman. The song reached number 12 in September of that year, and stayed there for 2 weeks and remained on the charts for 12 weeks. On December 29, 1962, "What To Do With Laurie" entered the Billboard Hot 100 and peaked at number #67. "One Boy Too Late" entered the Billboard Hot 100 on May 11, 1963 and was to be his last nationally charted record. He subsequently, had several songs that were regional hits in the U.S.A.
He had hit records in Argentina, Brazil, Canada, Germany as well as "It Had Better Be Tonight" in Chile, "See You In September" in the Philippines and "How To Murder Your Wife" in Japan.
In 1965, United Artists released Mike Clifford’s debut album For The Love Of Mike which was reviewed and a spotlight pick in the February 13, 1965 issue of Billboard.
Mike appeared in the films Village of the Giants in 1965, and also sang the love theme of the film [The Glass Sphinx] in 1967, the title song to Dagmar's Hot Pants "You Say Love" in 1971, The love theme for the film Necromancy , "The Morning After" in 1972, Lord Of The Rings in 1978. In the 1978 film Sextette, Mike Clifford sang "Love Will Keep Us Together" with Mae West.
Clifford recorded the songs "Pretty Little Girl in the Yellow Dress" from the Universal Pictures The Last Sunset in 1961, "Look in Any Window" from the Allied Artists picture Look in Any Window in 1961, "Joanna" from the TV production Peter Gunn in 1961, "At Last" for the United Artist release The Last Time I Saw Archie in 1961, "It Had Better Be Tonight" from the Mirisch-G&E Production The Pink Panther in 1963, "Barbara’s Theme" from the motion picture Diary Of A Bachelor in 1964, "How to Murder Your Wife" and "Here's To My Lover" from the motion picture How To Murder Your Wife in 1965, "Magic Night" for the movie soundtrack Mondo Hollywood in 1967, "It’s a Dream Away" for the American International Pictures film The Glass Sphinx in 1967, "The Golden Breed" for the Hollywood International Production movie The Golden Breed in 1968, "Mary Jane", the title song for the American International motion picture Mary Jane in 1968 the theme from the motion picture "Those Fantastic Flying Fools", "You Say Love" for the Trans-American Film Dagmar’s Hot Pants Inc. in 1971, "The Morning After" for the Cinerama-Zenith International Production, and the theme for Necromancy in 1972.
In the early 1970s, Clifford and Lu Ann Simms were called in to record a new version of the Beach Party album music after Frankie and Annette recorded the final versions for the films. These recordings were released as Summer Fun by the Columbia House mail order division as a bonus gift.
--------------------------------------------------
For The Love Of Mike (1965) 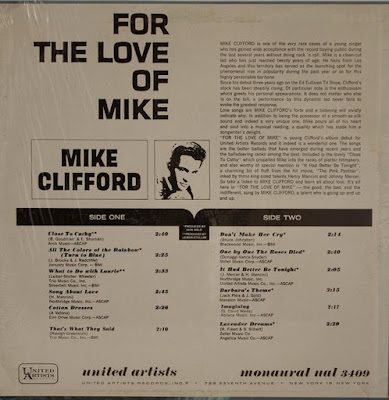 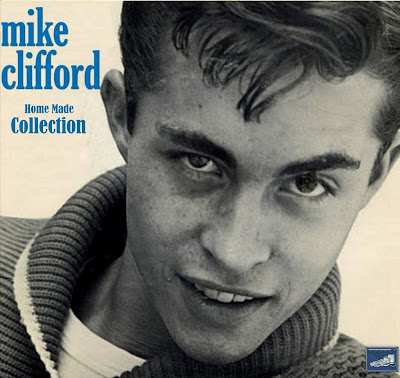