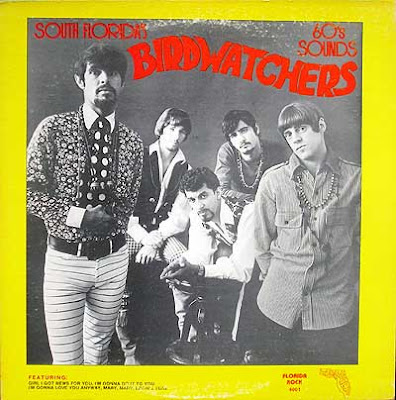 REPOST&REQUEST
The Birdwatchers were a garage rock pop band active in the 1960's in the Miami area. The band dabbled with an Everly Brothers sound in their early career (1964), even releasing a version of "Wake Up Little Susie" on Tara, a local Florida label.
The band hit their stride beginning in 1966 with a clutch of garage-pop 45s released on the Mala label (some were also locally released on the Scott label). These featured the powerful, charismatic vocals of Sammy Hall, better than average production and high-quality songcraft.

Though they achieved some regional popularity and issued almost 20 singles on several different labels in the 1960s, Florida group the Birdwatchers never broke out nationally, and aren't even well represented on anthologies of regional/obscure '60s garage rock. While they weren't too original, they did cut some pleasing pop/rock singles with garage and blue-eyed soul tinges. The best of these was "I'm Gonna Love You Anyway," which, like several of their best songs, drew from the poppier face of the British Invasion as its primary influence. The failure of the Birdwatchers' material to achieve CD reissue (though a now hard to find LP of some of their stuff appeared in 1980) is odd, as the group was considerably better than many other such '60s outfits with limited exposure who have been honored by compact disc packages.
The Birdwatchers:
EDDIE MARTINEZ: drums
JOEY MURCIA: lead guitar
BOBBY PUCCETTI: keyboards
JERRY SCHILLS: bass
SAMMY HALL: vocals
This long-lived group from Tampa, Florida produced mainly highly-derivative beat/pop fare, though enjoyable nonetheless. They recorded under several other assumed names, including two 45s with Duane Allman as The New Rock Band.The 1980 retrospective LP collects most of their 45s from 1965 to 1967. The version of Mary Mary here is a different version to the 45. There's also two cuts - Hey Schroeder and Can I Do It - which the compilers imply were not released, but these could be the unconfirmed 45 No. 10 above.Some copies of the Mary Mary 45 come with a paste-over label where the title is given as It's To You That I Belong. Ordered by a Miami radio station because of perceived marijuana connotations, this 45 variant is known as a "WQAM copy".A Bobby Puccetti composition, Heard You Went Away, was recorded by the Proctor Amusement Co..Joey Murcia went on to join Magic whose rare LP Enclosed has seen a reissue. Spirit fanatics should note the cover of Mr. Skin on the Geminix 45.Sam Hall, who joined the band in 1966, was previously in The Mor-Loks and The Trolls. He became a Christian in the late sixties or early seventies and later toured as Sammy Hall and The Sammy Hall Singers. Jerry Schills was previously with Milwaukee's Legends.
1. I'm Gonna Do It To You (2:05)
2. A Little Bit Of Lovin' (1:53)
3. Just be Yourself (2:43)
4. Then You say Boh Bah (2:04)
5. Can I Do It (2:08)
6. You got it
7. I'm gonna love you anyway
8. Mary Mary (it's to you that i belong)
9. Girl i got news for you
10. It's a long way home
11. It doesn't matter
12. 1I have no worried mind
13. Cry A Little Bit
14. Eddie's tune
15. Hey schroeder
http://www.allmusic.com/album/birdwatchers-r30628/review
http://www.garagehangover.com/?q=comment/reply/409
Posted by: D&J на 22:20