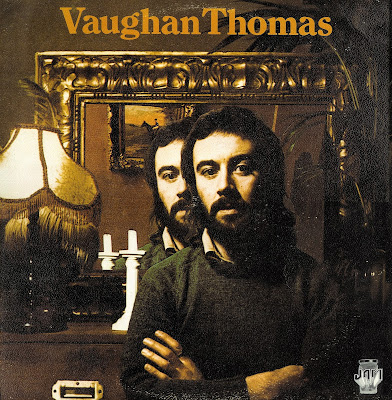 "I started writing this post in December 2011 and abandoned it because I couldn't find any decent information about Vaughan Thomas. Over a year later and I still can't find any info on him but I feel like I should write a little something, so here goes...
Vaughan Thomas was from Wales and was aged 24 when he released his lone solo album, the first to be released on Jam Records, the label that brought you albums by Telly Savales and Edward Woodward (no wonder it was a short lived label).  It was recorded at Dick James Studio in London in 1971 and produced by Mike Batt. This album is a genuine lost pop gem and shockingly, still unreleased on CD. Fans of John Pantry or Tony Hazzard's first albums should track this LP down immediately as it is still selling for much less than the Record Collector Price Guide value of £40.
"Say That I'm On Your Mind" begins with a single harp being plucked and Thomas' gentle vocals, which sound uncannily like Mike Batt. The song builds into a fully orchestrated ballad with some sweet Ringo drum fills. "What a nice way to start an album" your Gran would say. "This is the kind of record the Wombles should have made" is what I say. Next up is a killer take on John Lennon's "Cry Baby Cry". Again, heavy on the orchestration and well scored by Batt. I could get very over excited and state that it is better than the Beatles version, but you wouldn't believe me. Decide for yourself.
Vaughan Thomas on the beach
Thomas might as well have sung "let's spend some time together" on his take on the Rolling Stones' 1967 hit and the lack of testosterone in the delivery would certainly have Mick Jagger's eye balls rolling into the back of his head. An odd choice of song to cover but it is somehow perfectly pulled off and fits nicely on the record. There are two songs taken from Tony Hazzard's Loudwater House album released a year earlier in 1971, "Blue Movie Man" and "Woman In The West", again, both rivalling their respective originals as best versions.
There's some mean wah wah guitar provided by respected session guitarist Chris Spedding on "One More Time Around" which roughens up the edges of this haunting ballad. "I Wanna Be Famous Like My Dad" is Thomas' tribute to his father who according to the lyric "As well as being a sportsman, he could sing and play anything too. He conducted the Halle orchestra at the age of twenty two". This was released as a single by DJM Records prior to the album but failed to chart.
The only time the album gets even remotely heavy is on the fuzzed up, Lennon-esque singalong, "We Are The People". Both Moog and Mellotron make an appearence in "Black Sheep Of The Family" which was a joint song writing effort with Mike Batt. "Summer Song" is exactly what it says on the tin, an ultra laidback affair with a slight country twang courtesy of some shimmering pedal steel guitar which is followed by the bouncy piano pop of "Pictures Of Summer Gone" akin to what Emitt Rhodes was playing around about this time. Its hard to pick a favourite song on the album as they're all brilliant but I've decided to feature the album's closing track "Too Far Down", as it's the most McCartney-ish song on here...." ~ Unknown
http://biteitdeep.blogspot.com/2013/03/vaughan-thomas-vaughan-thomas-1972.html
VAUGHAN THOMAS, ПРЕДПОЧИТАВШИЙ НЕЖНЫЙ ПОП-РОК
https://www.liveinternet.ru/users/2753604/post418701607/ 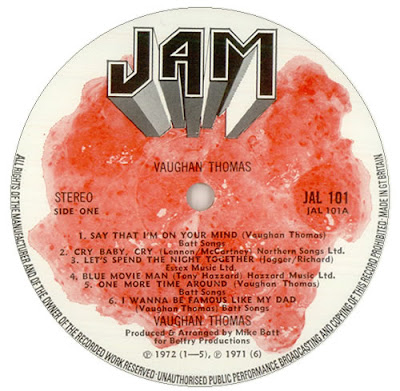