The Lost - Lost In Action 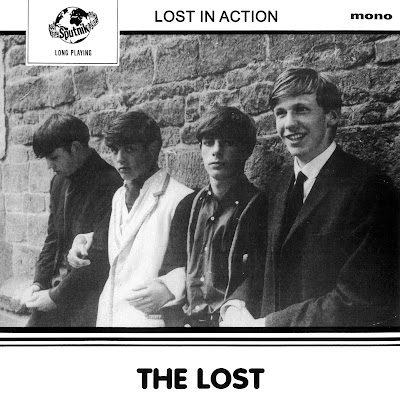 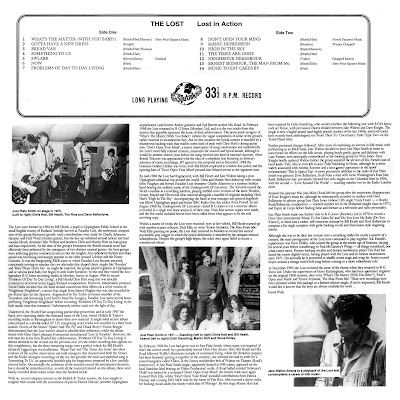 Originally known as Paradise Lost this band were formed in 1964 by Bill Heath whilst he was at Uppingham Public School in Rutland. The early line-up fluctuated quite a bit but eventually stabilised into 'A' above. They started out playing R&B and in August 1966 visited R.G. Jones' recording studio in Mordon, Surrey. The session produced a cover version of Neighbour, Neighbour, a recent Stax single by Jimmy Hughes, which was also recorded by The Spectres (a pre-Status Quo act) and a Rolling Stones'-influenced Bill Heath/Chris Hatt composition, Problems Of Day To Day Living, but neither recording made it onto vinyl. They were augmented for this session by Stu Taylor, who'd been with The Tornadoes and The Savages (Screaming Lord Sutch's band).
By 1967 they were known as simply The Lost and a seven track single-sided acetate album was cut at a Birmingham studio. The featured tracks were four Bill Heath/Chris Hatt compositions:- Problems Of Day To Day Living, Bread Van, The Times Are Gone and Something To Us; covers of The Rolling Stones' Spider And The Fly and Chuck Berry's Guitar Boogie and a Chris Hatt instrumental Lost In Paradise. Of their originals Something To Us was arguably the most complete.
The Lost then augmented their line-up with the recruitment of pianist Patrick Hannay and ex-Amber guitarist Mike Read. This new line-up returned to R.G. Jones' studio cutting two new tracks - the raw and primitive What's The Matter (With You Babe) and Don't Open Your Mind, but still there was no record company interest. Don't Open Your Mind was a pulsating number which they later re-recorded as Just Plain Smith.
In mid-1968 Heath and Walton departed to tour the world. The Hatt brothers teamed up with Charlie Adamson (who'd been one of the early drummers with Paradise Lost) and vocalist John Vaughan in a temporary band, Undergrowth Of Literature. Their tour manager was future Radio One disc jockey Peter Powell and they also cut an acetate album at R.G. Jones' studio.
The Lost had reformed by Autumn 1968, returning to R.G. Jones' studio to record a piece of pop-psychedelia, Ernest Seymour, The Man From 66c, but again it failed to secure a commercial release, although it was easily their most inventive recording. In mid-1969 they evolved into Just Plain Smith.
In 1994 Tenth Planet released a 14-track compilation of the band's material, Lost In Action, along with quite an extensive history of the band on the sleevenotes on which this article is based. Three of the finest moments:- What's The Matter (With You Babe), Don't Open Your Mind and Ernest Seymour, The Man From 66c were also re-recorded by the band as a limited edition single in December 1993, which came with the Tenth Planet album. The original recordings of these songs also can be found on Syde Trips, Vol. 2 (LP).
~ Tapestry Of Delights
Posted by: D&J на 00:21