The Foundations - Baby Now That I Found You 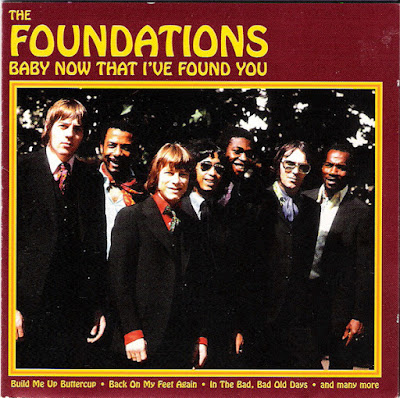 The Foundations were a British soul band, active from 1967 to 1970. The group, made up of West Indians, White British, and a Sri Lankan, are best known for their two biggest hits, "Baby Now That I've Found You"  written by Tony Macaulay and John MacLeod; and "Build Me Up Buttercup"  co-written by Macaulay with Mike d'Abo, at the time the lead vocalist with Manfred Mann. The group was the first multi-racial group to have a number 1 hit in the UK in the 1960s. The Foundations are notable for being one of the few label acts to successfully imitate what became known as the Motown Sound. In terms of line-up and musical style, they anticipated the sound of the more successful Hot Chocolate. 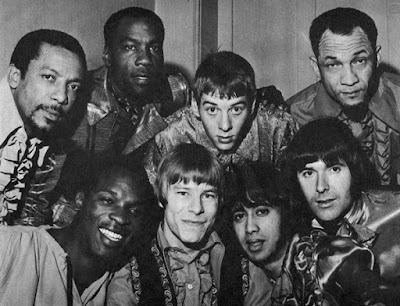 The Foundations were a surprisingly obscure late-'60s outfit, considering that they managed to reach the tops of the both the British and American charts more than once in the space of a year and had a solid three years of recordings. At the time of their debut in mid-1967, they were hailed as being among the most authentic makers of soul music ever to emerge from England -- the best practitioners of the Motown sound to be found on the far side of the Atlantic -- and were also accepted in jazz circles as well. "Baby Now That I've Found You," "Build Me Up Buttercup," and "In the Bad, Bad Old Days" were the biggest hits for this multi-racial octet, made up of Londoners and West Indians.

The Foundations were formed in January 1967 in the basement of a local coffee bar in Bayswater, gathered together through advertisements in Melody Maker. Lead singer Clem Curtis was a former boxer from Trinidad, while lead guitarist Alan Warner had been making his living in the printing trade in London while waiting for music to pay off. Flutist/saxman Pat Burke hailed from Jamaica, tenor saxman Mike Elliott had played with Colin Hicks (brother of Tommy Steele) in his band the Cabin Boys, as well as in several jazz bands, and trombonist Eric Allan Dale was another jazz veteran. Tony Gomez (keyboards), Peter Macbeth (bass), and Tim Harris (drums) rounded out the lineup. They selected the name Foundations based on their surroundings, a rehearsal space in the basement of a building.

The group made very little headway during their first few months together, although they did manage to get an audition at the Marquee Club. It was at their regular spot at a much smaller club called the Butterfly -- where they played one legendary gig on the last night of the Stax/Volt European tour -- that led to their breakthrough. They were spotted by record dealer Barry Class, who was impressed enough with what he heard to become their manager. He arranged a meeting with Pye Records producer/songwriter Tony Macaulay, who was working with Long John Baldry with some success, but also was desperately looking for a new act to break for the label. He'd written a song with his partner John Macleod called "Baby Now That I've Found You," which seemed to suit the Foundations.

The resulting single, issued in the summer of 1967, got no reaction from the public or on the airwaves until it got picked up by the BBC's newly founded Radio 1, by a stroke of pure luck. The station wanted to avoid any records being played by the pirate radio broadcasters, and looked back at recent releases that the pirates had missed. "Baby Now That I've Found You" was the immediate beneficiary, along with the group -- by November, the single held the number one spot on the British charts. The group's timing was as perfect as the song -- there had been a soul boom in England since late 1965, and the subsequent Motown and Stax/Volt tours by American R&B stars only heightened the public's interest.

The Foundations were hailed for being the first British band to come up with an authentic soul sound, and the fact that they were first multiracial band to top the British charts only made their success that much more impressive (at a time when England was beginning to come to grips with its own racial attitudes). What's more, the group had the goods to back up the press' accolades. Their performances revealed a seasoned, well-rehearsed, exciting stage presence and a bold, hard soul sound that most British bands managed to imitate only in the palest manner, if at all.

Meanwhile, their debut single got to number 11 on the American charts in the hands of MCA's Uni label, and it was equally well received in the rest of the world, selling something more than three and a half million copies. Suddenly, the Foundations were a British phenomenon and had a worldwide following.

From the Foundations An album, From the Foundations, was duly recorded and featured some superb material, embracing both current soul and the then-popular discotheque sounds. The covers included everything from Joe Tex ("Show Me") to Tony Hatch ("Call Me," in a version worthy of Motown), as well as some new Macaulay/Macleod numbers. The debut album never made the British charts, but it remained in print for years, a perennial seller that held up well over time.
Unfortunately, a follow-up single, "Back on My Feet Again," didn't crack the British Top Ten, despite very heavy airplay and promotion, and barely made the U.S. Top 50. In retrospect, it may have been too similar to "Baby Now That I've Found You," which had sold in enormous numbers. Its relative failure led to the beginnings of a split between the group and Macaulay, as both songwriter and producer, exacerbated by the latter's decision -- as their producer -- not to permit the group to record any of their own songs, even as B-sides. Additionally, they felt that Macaulay reined in their "real" sound, making them seem more pop-oriented than they were.

These disagreements occurred at just about the same time that the group itself began experiencing internal fractures. It seemed to Curtis, in particular, that some of the other members, having topped the charts and chalked up an international hit, weren't putting out the same effort they'd been giving to the group when they were still struggling.

Curtis was persuaded to pursue a solo career, ironically right after he'd recorded perhaps the best track he ever cut with the group, a killer rendition of "It's All Right," a number they'd been knocking crowds dead with on-stage all along. (They also released a live album, Rocking the Foundations.) Additionally, saxman Elliott quit as well, and was never replaced. Curtis was succeeded by Colin Young, a good singer in his own right who fit in perfectly with the group's sound, and the reconstituted group hit once more in early 1969 with "Build Me Up Buttercup," written by Macaulay with Mike D'Abo, which reached number two in England and number one in America. "In the Bad, Bad Old Days (Before You Loved Me)" was yet another hit, reaching the U.K. Top Ten and the U.S. Top 30.

The band's success finally faltered when Macaulay exited Pye Records. As he later revealed, he was still being paid solely as a producer and he received no royalties for his songs, despite millions of copies sold. With his departure, the group was cut off from the only composer who'd written all of their hits. Additionally, the sounds of soul were changing faster than the group could assimilate it all -- they tried for a funkier, James Brown-type sound on their last recordings together in 1970 but failed to attract any attention.

The Foundations split in 1970, and by the middle of the decade that followed, Curtis revived the band -- but so had Young, and both outfits were called the Foundations. A lawsuit resulted in Curtis getting the rights to the original name, while Young was allowed to use the New Foundations. The group remains fondly remembered, if not often written about, in England, and it achieved some fresh international recognition in 1998 when "Build Me Up Buttercup" appeared prominently in the hit movie There's Something About Mary. Curtis continues to perform in a revived version of the group, and he and Warner have recorded new versions of the Foundations' classic numbers. Various versions of the Foundations continued to tour into the first decade of the 21st century, including Curtis as Clem Curtis & the Foundations and Warner as Alan Warner's Foundations. 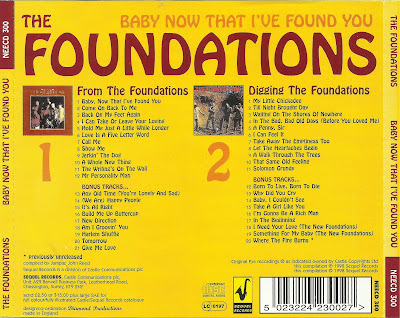 The proof of a reputation is in the listening, and this double CD just oozes proof in its 41 songs, 23 of them off of From the Foundations and Digging the Foundations. At their worst, the Foundations sound like early Rare Earth (or maybe Three Dog Night) on a really good day, and most of this collection is a lot better than that: smooth, slightly poppy but eminently danceable soul, stuff that Berry Gordy and company and their fans lived for -- and it's beautifully remastered and very carefully put together to make the most of the CD format. Ironically, the hits are among the least interesting of the songs here, although they'll sell the set. Two of the bonus tracks, "I Need Your Love" and "Something for My Baby" by the New Foundations (Colin Young with new backup), are lost treasures that ought to have filled the international airwaves in 1976, when they were cut. And the utterly infectious "Where the Fire Burns," recorded by the original band in 1970, is a lost funk-instrumental jewel, with soaring horns and thick, twangy rhythm guitars. An astonishing, glorious collection, only missing cuts off the live second album, Rocking the Foundations, which is due for a separate reissue.