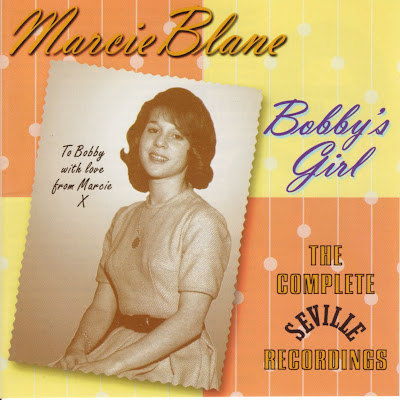 One minute she was schoolgirl Marcia Blank,
the next she was Seville recording artist MARCIE BLANE,
about to embark on a showbiz career.... 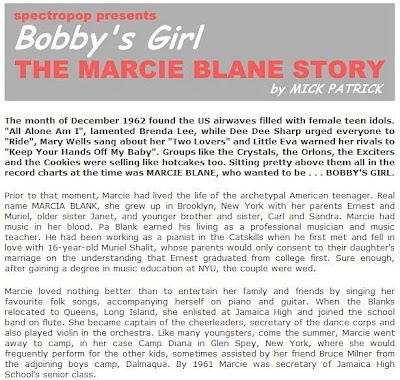 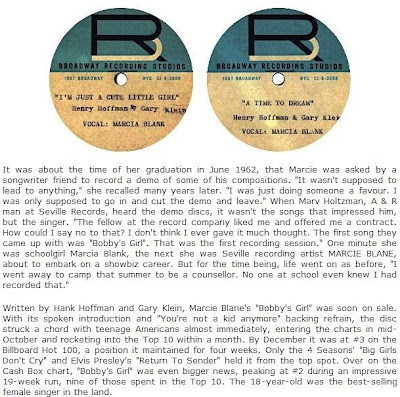 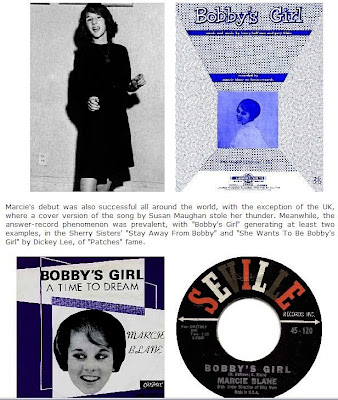 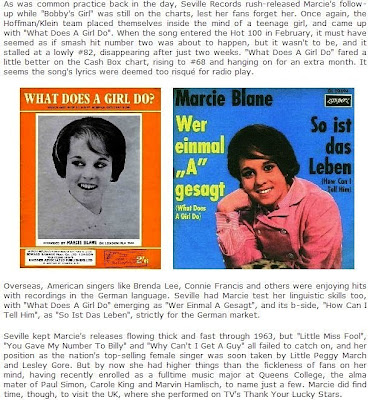 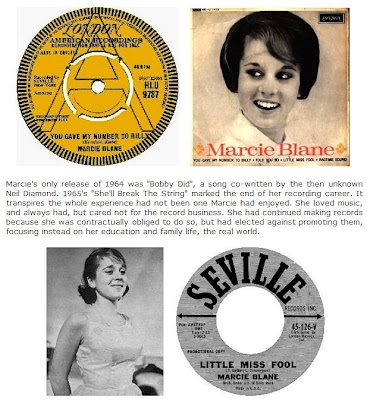 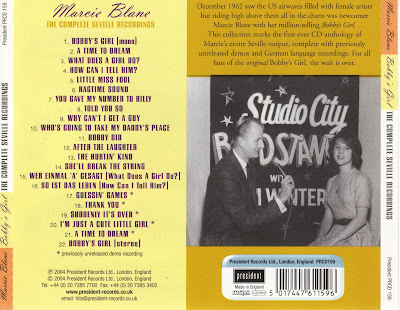 Oldies collectors can finally quit shelling out big bucks for bootleg CDs and get the real deal with Bobby's Girl: Complete Seville Recordings, a legitimate anthology of Marcie Blane's early-'60s recordings for the Seville label. The 22 cuts comprise all of her Seville singles, five long-lost demo tracks from her audition tape, and mono and stereo versions of her Top Three hit, "Bobby's Girl." "Bobby's Girl" is a classic of the teen idol era -- a teen-oriented expression of female devotion with a prominent melody and an abundance of earnest, girlish charm. Blane was practically a one-hit wonder, although she managed to score a minor hit with a follow-up release, "What's Does a Girl Do?" As that title suggests, Blane recorded a number of songs similar in theme to "Bobby's Girl" -- boy crazy, girls-are-made-for-love confections that appealed, in different ways, to male and female fantasies. In "Who's Going to Take My Daddy's Place," Blane is on the prowl for a surrogate father to scold her and take care of her, and in "Why Can't I Get a Guy" she laments being gifted with a brain but not a boy. The music is pure teen pop, similar toShelley Fabares and Annette Funicello, but Blane has more conventional singing talent than either of them. The one departure from the teen pop formula is "Ragtime Sound," a jaunty throwback to earlier musical forms similar to Annett's "Mister Piano Man." The package also includes German-language renditions of "What Does a Girl Do?" and "How Can I Tell Him" that Blane handles with confidence. The five demo tracks consist of Blane performing obviously unfamiliar (to her) songs as an electric guitar strums in the background; the performances are rough, but she shows clear promise as a singer and foreshadows the direction of her recording career with the delightfully precious song "I'm Just a Cute Little Girl." The "popcorn oldies" crowd and pop music lovers on a sugar diet are sure to enjoy this carefully compiled program of teen idol hits and rarities. ~ Greg Adams, All Music Guide