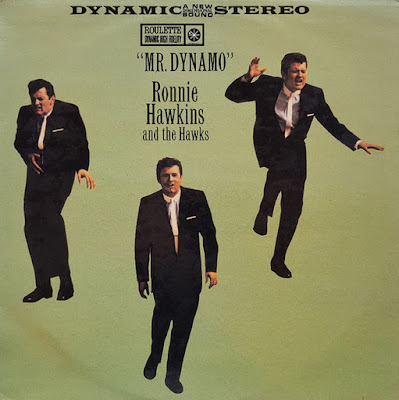 Ronnie Hawkins is a rockabilly singer who formed his original backing band, the Hawks, while attending the University of Arkansas. After auditioning unsuccessfully for Sun in 1957, he started working regularly in Canada the following year, eventually taking up permanent residence there. After one release on the Canadian Quality label, he signed with Roulette in New York in 1959, having hits with "Forty Days" and "Mary Lou." The live fervor of Hawkins (known as Mr. Dynamo) and the Hawks' show continued in Canada after all the original members except Levon Helm headed back to the U.S. Hawkins quickly hired Canadian players Robbie Robertson, Garth Hudson, Rick Danko, and Richard Manuel as the new Hawks. They stayed with him until 1963, but later became Bob Dylan's backing group and went on to a career of their own as the Band. Hawkins has remained a legend in Canada, recording unrepentant rockabilly sides and gigging constantly. He's still the original Mr. Dynamo, capable of shaking the walls down any old time he feels like it.